The Winnipeg Police Service has charged three people with public mischief, accusing them of staging a phony hate-crime attack on their River Heights restaurant.

An anti-Semitic attack originally called "the most brazen" the city had seen was staged by the owners of the restaurant that reported it, Winnipeg police say.

All three members of the family that owns BerMax Caffé and Bistro on Corydon Avenue have been arrested and charged with public mischief since the incident was initially reported last week. The family, however, insists they didn't fake anything.

"We didn't, because we don't joke about swastikas on our walls," Oxana Berent said in an interview with Ismaila Alfa, host of CBC Manitoba's afternoon radio show, Up to Speed.

On Thursday evening, police responded to a report of an assault at the restaurant. A woman said she'd been assaulted, and the restaurant was spray-painted with hateful graffiti, police said.

"The anti-Semitic graffiti and vandalism were also falsely reported as being done by outside suspects," Smyth said.

"We found evidence of a crime. It just wasn't a hate crime," said Smyth, adding the police expended considerable resources investigating and took the report seriously. 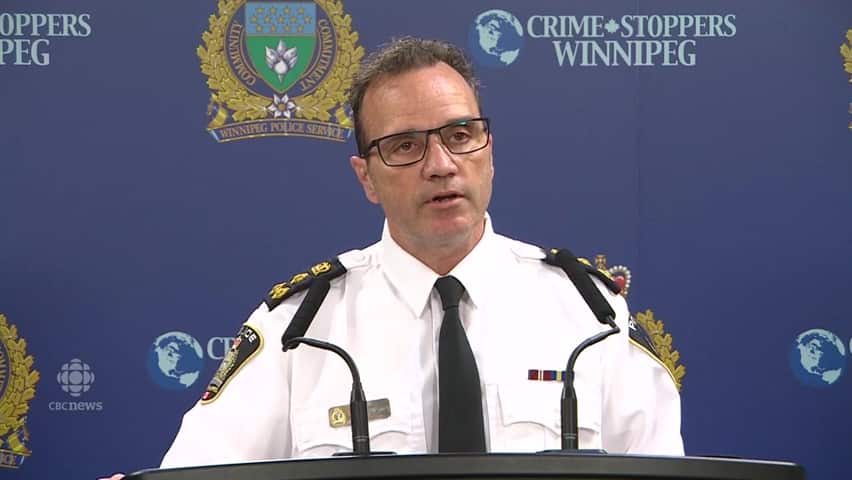 'We found evidence of a crime, it just wasn't a hate crime'

Smyth said he is disappointed by the alleged staging and fears it will promote cynicism. The incident took place the night before the start of Passover, a significant Jewish holiday.

Alexander Berent, 56, Oxana Berent, 48, and Maxim Berent, 29, have all been charged with public mischief and were released after being arrested, police say. They are slated to appear in court in May.

Oxana Berent said she would never invent a story about an anti-Semitic crime, given her family's experiences.

"My grandmother's family, they died in the Holocaust. Just her and her little brother survived, the whole family. We don't joke about that," she said, through tears.

After the reports of the vandalism and attack surfaced last week, the chief executive officer of the Jewish Federation of Winnipeg said the group was "horrified and saddened."

"I just can't fathom how or why people would want to do such a terrible act," said Elaine Goldstine.

Federation spokesperson Adam Levy called it "the most brazen act of anti-Semitism that we've seen in our community, and perhaps ever."

In a written statement Wednesday afternoon, the federation said:

"We are shocked and deeply disturbed by today's news. It is deplorable that anyone would make false allegations of anti-Semitism, especially claims of such a serious nature, for any kind of gain.

"False complaints of criminal acts of anti-Semitism are not only illegal, they undermine the important work necessary to counter anti-Semitism and hate in all forms.

"We reiterate our appreciation of the work of the Winnipeg Police Service and their continued support for the Jewish community."

Smyth wouldn't speculate on a motive for staging the incident, nor would he comment on a previous report of a hate-motivated incident at the same restaurant.

Ran Ukashi of B'Nai Brith Canada said he's never heard of an alleged fabrication of a racist incident on this scale in Canada.

He noted all of Winnipeg rallied behind the Jewish community.

"I can see this as a betrayal of the community and a betrayal of also the police," Ukashi said at Winnipeg City Hall. "It's a waste of time, and of course people might roll their eyes at incidents in the future and think 'Oh is it true or is it not?' when in reality we know that the preponderance of incidents that are reported are in fact true."

Winnipeg Mayor Brian Bowman called the alleged fabrication disgusting and said if the mischief charges are proven in court, the actions of the accused would represent a "breach of trust" in the community.

Westworth United Church minister Loraine Mackenzie Shepherd had planned an interfaith prayer vigil for Thursday to respond to the incident at Bermax. After consulting with members of the Jewish community, the church decided to cancel the event, she said.

"We decided we are all too raw right now to hold anything," she said.

The church sanctuary will be open Thursday in case anyone who hasn't heard about the cancellation shows up and needs space to process the news.

The news of the charges against the Bermax owners is shocking and saddening, said Shepherd, who plans to address it with her congregation and encourage them to not let it distract from the real problem of hatred and intolerance.

"We want to stay firm and clear and calm in our message of support for the Jewish community that we continue to stand against anti-Semitism and against hate directed towards any group because of their identity," she said.

With files from Aidan Geary, Austin Grabish and Cameron MacLean