Nearly every day of the week, volunteers and staff of Bear Clan Patrol guide hundreds of people through a warehouse where they can access fresh food donated by local grocers.

Selkirk Avenue food security program serves an average of 117 people per day; helped over 400 on one day

Nearly every day of the week, volunteers and staff with Winnipeg's Bear Clan Patrol guide hundreds of people through a warehouse where they keep donated products, earmarked for people who have difficulty accessing healthy food.

Karen Munroe is one of the many who go home with free produce, bread and sometimes meat thanks to the citizen patrol's food security program at 584 Selkirk Ave.

"I've been coming here... since it opened, getting healthy food like apples, oranges, grapes, tomatoes, that I can't afford to buy," she told CBC News.

A report commissioned by the Bear Clan and released recently by the University of Manitoba found the food security program is meeting a need in the nearby Point Douglas neighbourhood, and significantly improving people's access to fresh foods.

Munroe says that's true. When asked what impact it's making in her life, she said, "a good impact, a really good one."

"I've been eating healthier and I've lost weight from not eating junk [and switching] to eating tomatoes, grapes — all those good foods."

Access to healthy food in the area is a problem, say patrons, as is the price point for such foods.

"It's helped us [because] we haven't really been able to afford a lot of groceries," said Christine Murchison, who stopped by the Bear Clan "den" for food.

"It gave us fruit and vegetables which we rarely could afford to buy."

The average household income in Point Douglas is just over $39,600, according to the U of M study. That's significantly lower than the Winnipeg average of just over $58,500.

The unemployment rate for Point Douglas is 9.5 per cent, compared to 5.9 per cent for the rest of Winnipeg, according to the study.

The researchers found the Bear Clan program serves an average of 117 people per day, although some days that number is much higher. One day in September this year, the program served 422 people, including 122 children.

Brian Chrupalo, the board chair for the Bear Clan, said the number of people accessing the program is increasing every month.

"To see it develop to where it is now, how it's expanded even from January to now, the amount of people that are coming here … we see people lining up around the corner," Chrupalo said.

"So clearly there's a need for it and a huge demand for the service we're providing here."

Bear Clan Patrol has a partnership with six grocers in Winnipeg, who donate food that would otherwise be bound for the garbage bin.

Volunteers pick up food that's near or past its best-before date — which is generally still perfectly safe to eat — or otherwise deemed not suitable to sell.

See how the Bear Clan food project helps those in need: 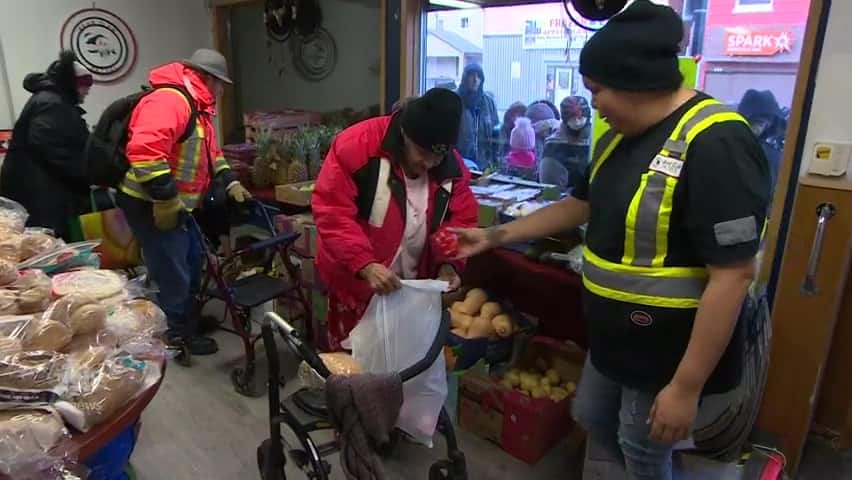 11 months ago
1:10
Nearly every day of the week, volunteers and staff of Bear Clan Patrol guide hundreds of people through a warehouse where they keep donated products earmarked for people who have difficulty accessing healthy food. 1:10

From there, patrons are guided by staff and volunteers to select food. Selections are based on factors like whether the patron knows how to cook with the food, what they already have at home, their personal tastes and any health conditions, such as diabetes.

Although the food is donated by grocery stores, Bear Clan covers costs for the vehicles to pick up and deliver the food and for employees.

The U of M report says Bear Clan's program is different from other charities of its kind because it provides choice, freshness and frequent access to healthy food.

It's also based right in the community.

"People are walking from close proximity to come and get this stuff," Chrupalo said.

"They can't sometimes go to the bigger organizations like Winnipeg Harvest and Siloam. They're all doing great work, but at the same time, we're right here in the community, community-based, and we're helping the people that are in this area."

The study also said patrons, many of whom have chronic illnesses, reported that their health improved as a result of the increased food access — something Chrupalo said he's also heard from people using the program.

"It's a huge benefit for the community for this food distribution program to be going on."

With files from Shannah-Lee Vidal