Bear Clan finds up to 1,300 dirty needles at 1 location

More needs to be done to give drug users a way to safely dispose of their used needles, the leader of the Bear Clan says after volunteers found as many as 1,300 syringes at just one spot during a patrol last week.

Clean needle distribution rising, but so are efforts for safe disposal: Street Connections

More needs to be done to give drug users a way to safely dispose of their used needles, the leader of the Bear Clan says after volunteers found as many as 1,300 syringes at just one spot during a patrol last week.

Bear Clan leader James Favel says the used needles were found in and around a stairwell between apartments at 363 Manitoba Ave. on Friday.

While it's the largest cache of needles the group has found in one location, such finds no longer surprise Favel.

"It's proof that the mental health issues that [are] pervasive in our community are not being addressed. The people are able to sit there, pound down 1,300 syringes worth of junk, and nobody noticed," he said.

It's definitely out of the ordinary, says Shelley Marshall, a community health nurse with Street Connections, a Winnipeg Regional Health Authority agency that operates a van that supplies clean needles as well as condoms and other harm-reduction services to people on the street.

"It's significant when Bear Clan finds 1,300 needles the community. It's really unusual to find that many in one spot," Marshall said. "That's usually the result of someone being evicted and their needles being thrown out. Outdoor drug use tends to be sporadic. You'll find 10 or 100 in one place," she said.

The number of clean needles distributed in Winnipeg has risen significantly every year since 2013, and so have Street Connections' efforts.

They're on pace to distribute two million needles in 2018, a new record.

For 16 hours every day, the Street Connections van responds to calls from injection drug users and the community, picking up sometimes hundreds of needles from a site.

There are also drop boxes throughout the city for safe disposal, including some on Hydro poles.

They provide users with biohazard boxes for safe disposal of the sterile needles they supply.

Marshall would like to do more, but there's only so much funding.

"We're cobbling together the resources to continue serving people who inject drugs," she said.

They have to continue distributing clean needles, Marshall said, to meet public health goals, such as stemming rising rates of hepatitis A and B among intravenous drug users.

She says usually, big caches of needles like the one the Bear Clan found on Manitoba Avenue are left behind by homeless drug users, who might not have another way to dispose of them.

"We don't want needles to ever end up in the community," Marshall said. 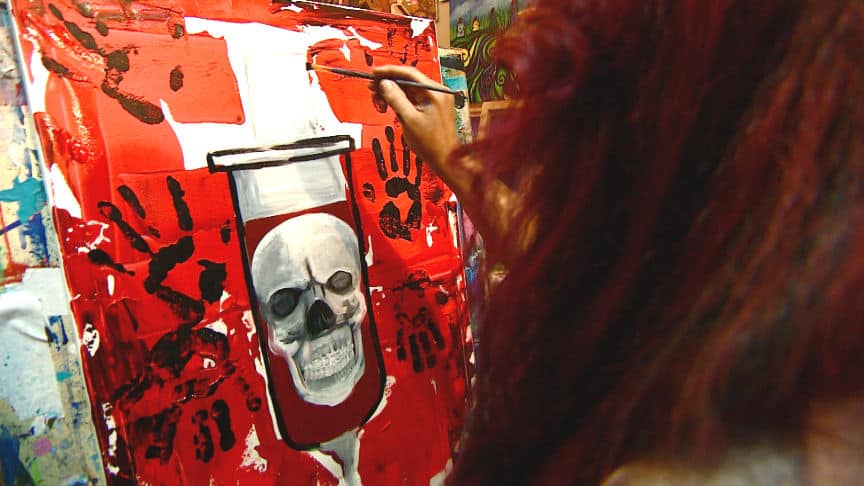 3 years ago
1:35
Winnipeg artist Jackie Traverse is starting a support group specifically for families facing what she calls the "demon" of the drug scene, meth addiction. 1:35

A very small proportion of people who use drugs discard their needles that way, she said.

"Most of the clients we serve will actually pick up needles and discard of them safely when they find them in the community. There's a lot of concern for children among the people we serve, so I wouldn't want people who inject drugs to be painted with all the same brush."

Nine Circles Community Health Centre, which provides care for people with HIV, is a distribution point for Street Connections' needle exchange program and has a drop box behind its West Broadway location.

Local businesses also stop by to pick up the kits, he said.

In a pinch, users can drop their needles in a pop bottle with a lid before throwing them in the garbage, he said.

Some people in the community have been collecting plastic laundry soap containers with lids to give to users instead of the kits, he said.

"If people felt uncomfortable or really conspicuous carrying a sharps container around, that was a bit of a barrier, but they didn't feel quite as concerned if they look like they're going to the laundromat," he said.

"Anything we can do to convince people to have something available so that they're putting their needles in a safe place and not leaving them out for the community."