It's been exactly two months since Seidu Mohammed and Razak Iyal almost froze to death walking across the border into Manitoba from the United States, and while they're grateful to be in Canada, they're struggling to cope.

Everyday activities like eating, dressing and bathing a struggle

It's been exactly two months since Seidu Mohammed and Razak Iyal almost froze to death walking across the border into Manitoba from the United States, and while they're grateful to be in Canada, they're struggling to cope.

Arriving with frostbite after a seven-hour trek across snow-covered farmers' fields, the Ghanaian men both had all their fingers amputated. Mohammed also lost his thumbs and parts of his ears.

The hardest part, they say, is having to depend on others for help with everyday activities like getting dressed.

I hope we can stay forever.- Seidu Mohammed

One of the things he's relearning is personal hygiene. Using the toilet and taking a shower are still a challenge.

Still, he says, he's the lucky one; with one full thumb, he can still do a lot for himself, and he wonders when he'll be able to cook again.

"We have African food called foufou and peanut butter soup — that's the favourite I used to cook," he says. "I'm just thinking about it now, how can I do this thing?" 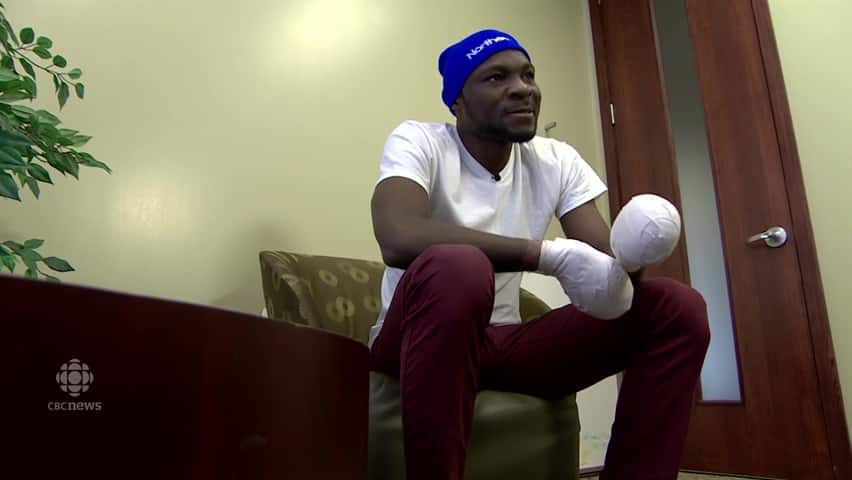 4 years agoVideo
2:09
It's been exactly two months since Seidu Mohammed and Razak Iyal almost froze to death walking across the border into Manitoba from the United States, and while they're grateful to be in Canada, they're struggling to cope. 2:09

Mohammed, 24, struggles even more with the basics of life. An occupational therapist is teaching him to eat by strapping spoons and forks to the stump where his fingers used to be.

"I'm trying to be independent for myself because I don't want them always to be doing things to me. If they're not there, what am I gonna do?" he asks with a shrug.

Doctors have talked to him about amputating a toe so it can be fashioned into a thumb, but he refuses.

"I don't want them to touch my toes. And I've even spoken with my mother ... I ask her and she say no, no, no, no, no," Mohammed says, adding he played soccer at a very high level in Ghana and hopes to play someday for Canada's Paralympic team.

Both men are still living in a lodge attached to Winnipeg's Health Sciences Centre, but they are preparing to move to a private home run by Hospitality House Refuge Ministry.

The head of the organization, Karin Gordon, gave them their first tour of the house this week.

Gordon apologized for what she described as a "construction zone," but modifications to the house are necessary to accommodate the two men who can't use their hands the way they used to.

"We've changed all of the doorknobs to levers, and we're changing all of the faucets to levers instead of knobs," Gordon said.

The toilets will be replaced with bidets; there may be an electronic fob system installed so the men don't need house keys.

The renovations will cost thousands of dollars, paid for by churches and private donations.

"It's a great challenge but it's also a wonderful privilege to be able to journey along with people as part of their initiating their life in a new country," Gordon says.

Iyal says this is a big step towards independence. "We are looking forward for this and I hope we're gonna feel happy."

This opportunity is exactly why they decided to make the risky journey across farmers' fields, across the border and into Canada.

Iyal says he was facing jail, torture or even death at the hands of a rich and powerful member of parliament representing his region.

"The police in Ghana, they are very corrupt. If you don't have money to give the police, you can't get justice over there," he says.

Iyal won't explain why he's in danger, saying he'll tell the whole story at his refugee board hearing next month.

However, he says his wife and mother are still being threatened.

I know I lost my fingers but it is better [than] to go back and be killed or go to jail.- Razak Iyal

"I talk to my wife and she go out for market or whatever, [and] they say, 'We know your husband is in Canada. We pray they deport him back so that we can get him.'

"I know I lost my fingers but it is better [than] to go back and be killed or go to jail."

Mohammed has a different story.

He says he was outed as a bisexual man during soccer training camp in Brazil in 2014 after the team manager found him with a same-sex partner.

"He started screaming and yelling at me, telling me I'm wicked, I'm a disgrace to my country," Mohammed says. "After he left, I lock my door then I started to be afraid."

Mohammed says his father, a strict Muslim, disowned him. He believes he'll be persecuted — or worse — if he goes back, and he doesn't believe the government or police will protect him.

"I want Ghana government to get rid of the anti-gay attitude because they are doing discrimination," he says.

They say they don't regret their decision to cross on Christmas Eve, which turned out to be one of the coldest nights in southern Manitoba that month.

Mohammed says after his asylum claim was denied — he doesn't know why — and he was twice rejected for a work permit, he knew he was about to be deported.

Iyal, too, says time was running out, with U.S. Immigration officers looking for him.

They'll make their cases to a member of the Immigration and Refugee Board of Canada at hearings in Winnipeg next month.

Meanwhile, members of Winnipeg's Ghanaian community have started a GoFundMe campaign to help raise money for their support and expenses.

"We are looking for the future now," Mohammed says.