The families of missing and murdered Indigenous women and girls say they are being left in the dark by the national inquiry into their loved ones' deaths and disappearances.

The families of missing and murdered Indigenous women and girls say they are being left in the dark by the national inquiry into their loved ones' deaths and disappearances.

Families should be engaged "first and foremost" by the inquiry, Hilda Anderson-Pyrz said at a news conference hosted by the Assembly of Manitoba Chiefs on Tuesday.

Anderson-Pyrz's sister, Dawn Anderson, died in 2011 in Leaf Rapids​, Man., under mysterious circumstances, she said. RCMP ruled her death accidental, so she's unclear whether her sister will be included in the inquiry.

"My family doesn't believe for a minute that my sister died of exposure due to intoxication.… I feel like I'm one of those families that falls between the cracks," said Anderson-Pyrz, co-chair of a coalition representing the families of missing and murdered Indigenous women and girls.

"There's very little information being provided to us as family members." 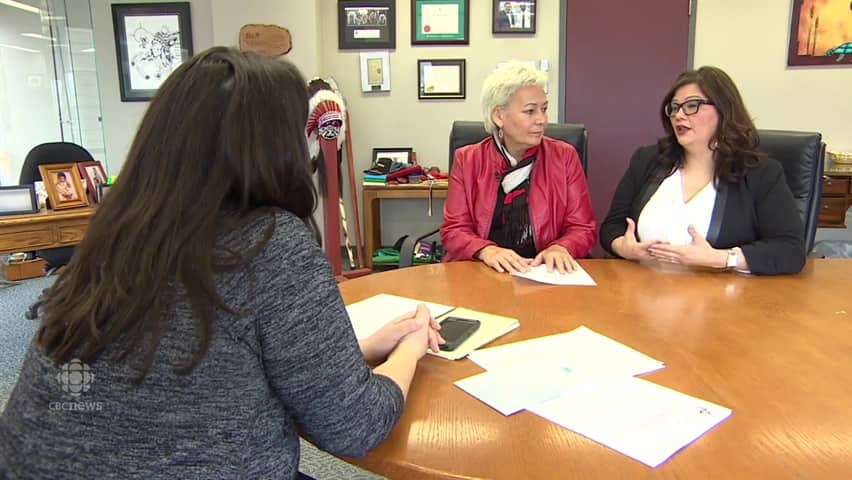 4 years agoVideo
2:11
The families of missing and murdered Indigenous women and girls say they are being left in the dark by the national inquiry into their loved ones' deaths and disappearances. 2:11

Many people are being directed to a website to follow the developments of the inquiry, which began seven months ago, but families in the North without reliable internet service are having difficulty accessing the information.

Anderson-Pyrz wants the inquiry to print out records of its progress and keep families up to date through radio and television announcements.

Angie Hutchison, a support worker with the Winnipeg Indigenous non-profit organization Ka Ni Kanichihk, said Tuesday that the basics about the inquiry are still a mystery to families.

"The inquiry has continually stated that they are putting families first, however there has been a real disconnect between what is being said and their actions."

For example, an email list she and others have joined to get updates from the inquiry has so far sent no messages to recipients other than confirmation their addresses are registered, she said.

"Our team is in the process of responding to emails, and apologize if you haven't got a response to date," said Waneek Horn-Miller, community relations director with the national inquiry into missing and murdered Indigenous women and girls.

She said her team is in the process of reaching out to community organizations in Manitoba and others across Canada.

The national inquiry will be releasing its first newsletter Wednesday to mark International Women's Day, she said.

"​We are also working on reaching out to northern and community radio stations, to get as much information to as many smaller communities as possible," Horn-Miller said n a written statement.

Assembly of Manitoba Chiefs representatives say they are concerned about provincial family liaison units because in the community there is widespread "mistrust and cynicism" toward Manitoba Justice's victim services program.

Sandra DeLaronde, another co-chair of the MMIW families coalition, said in the past, victim services in Manitoba have not been culturally appropriate and have not assisted families where deaths were deemed non-suspicious.

A CBC news investigation in 2016 found dozens of cases where police say there is no evidence of foul play but the families of missing and murdered Indigenous girls and women maintain their loved ones may have been victims of homicide.

In some cases, CBC found evidence of unexplained injuries and a failure to interview key witnesses.

DeLaronde said all families, in the North and south, need to be supported through the missing and murdered Indigenous women inquiry to prevent further trauma to them but also to ensure they can be active participants in the process of gathering information to address systemic problems.

"Families want answers," she said. "It is a national tragedy. [The inquiry] needs to have the scope and the time to do the work right; otherwise the issue will continue."