Chief Arlen Dumas of Mathias Colomb Cree Nation has defeated four other candidates to replace Derek Nepinak as grand chief of the Assembly of Manitoba Chiefs.

Arlen Dumas, chief of the Mathias Colomb Cree Nation, has been elected grand chief of the Assembly of Manitoba Chiefs.

Dumas was elected after the first ballot with 33 out of 54 possible votes. He defeated four other candidates to succeed Nepinak:

"I am honoured to be so strongly supported by my colleagues along with my community members, family and friends," Dumas said in a news release. 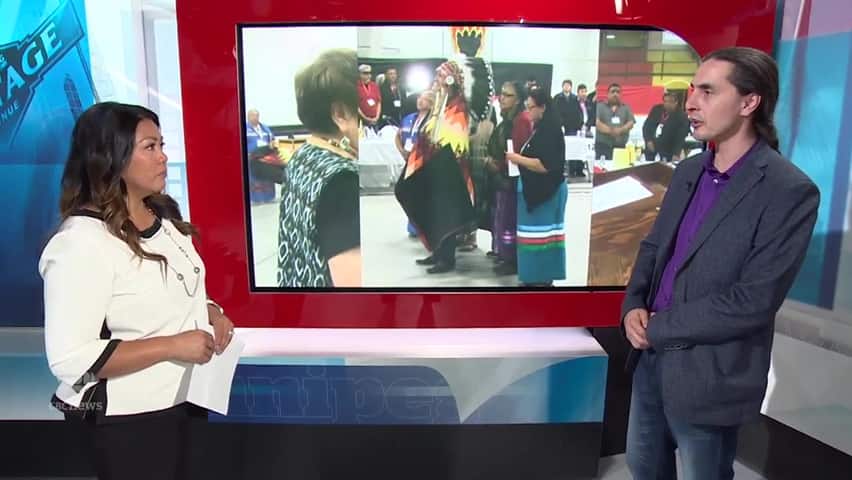 Dumas, who was born and raised in Pukatawagan, Man. ,was elected chief of MCCN in 2008 at the age of 33.

In an interview with CBC Manitoba's Up to Speed on Wednesday, Nepinak called Dumas a friend and said he is well-respected among First Nations leaders in Manitoba.

"The chiefs demonstrated their respect and their hope for his vision by giving him a resounding first-ballot victory, which in our politics is a landslide win," he said.

Nepinak said Dumas will face many of the same challenges he did did during his time as grand chief, including managing relationships with the federal government, the Province of Manitoba and other indigenous organizations.

Nepinak said he hopes Dumas will make hunting and conservation issues a priority, as well as gaming and housing.

He also offered the new grand chief some advice.

"Always walk with respect. Be humble," he said. "Don't be afraid to stand up and talk when the time arises."

Nepinak, who held the position of AMC grand chief since 2011, announced he would not seek re-election, explaining that he did not support running under the Indian Act system.

"We are not self-governing, but we are actually playing to the tune of federal governments and the funding they provide through the Indian Act political system," he said.

In a post on Facebook last November, Nepinak said he will continue to live his life in the service of Indigenous people, but will not "accept any more titles within the colonization system."

In addition to serving as MCCN chief, Dumas has served as vice-chief of Manitoba Keewatinowi Okimakanak, as well as on various committees with AMC. Recently, Dumas has led a group seeking to buy the Hudson Bay Railway and Port of Churchill.