Gibril Bangura came to Winnipeg from Sierra Leone in February 2014 and was told he would never make it as an artist. Now he has his own art show, which is being held this afternoon at Seven Oaks General Hospital. 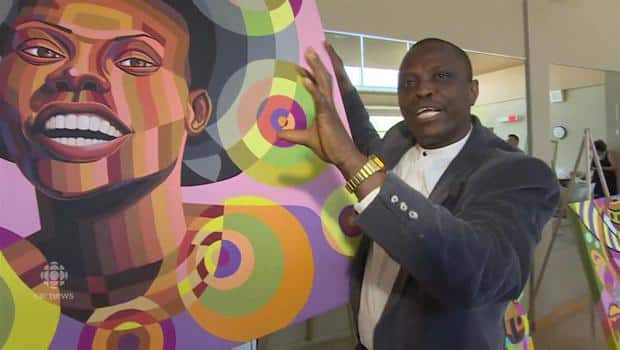 Bangura decided to prove them wrong. He has peddled his artwork around town endlessly since he arrived, using his masterpieces on the covers of greeting cards.

Now he has his own art show, which is being held this afternoon at Seven Oaks General Hospital. He's the first artist to utilize new art space in one of the main hallways at the hospital.

Bangura calls his work "happy paintings," something he has struggled with.

"I had this upbringing where I really suffered a whole lot, and this has been a problem within me," he told CBC's Up to Speed host Ismaila Alfa.

"I was fighting hard to get away from all the things on my mind, it has always been there. Then I began to go away from the kind of anger I used to show in my paintings back then, and I began to paint beautiful colours. I try to go away from reality."

Now, when he picks up a paint brush, he said he feels the "joyous flow" coming through it.

He said for him, it is all about connecting with people.

Bangura's art is on sale and will be displayed in one of the main hallway arteries (between the cafeteria and emergency room) at Seven Oaks Hospital over the next four months. A portion of the proceeds will go to the Seven Oaks General Hospital Foundation. The foundation is hoping to use the space for two-to-three different up and coming artists each year.

Gibril Bangura will be showing his works of art at Seven Oaks General Hospital from 2 p.m. to 5 p.m. on Thursday, April 30.