Surveillance cameras behind the Aboriginal Peoples' Television Network (APTN) headquarters in Winnipeg recorded the brutal attack of a man in the city's downtown area Saturday. 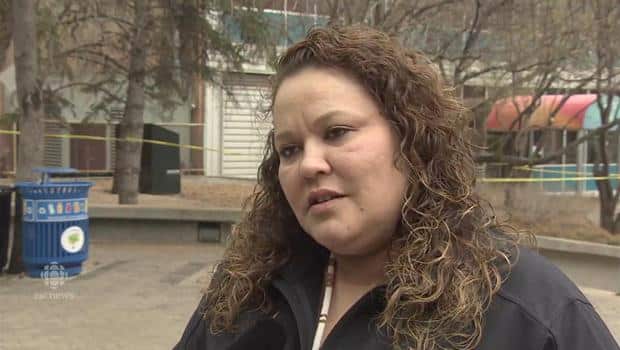 5 years ago
1:39
Surveillance cameras behind the Aboriginal Peoples Television Network (APTN) headquarters in Winnipeg recorded the brutal killing of a man in the city's downtown area Saturday. 1:39

Surveillance cameras behind the Aboriginal Peoples Television Network (APTN) headquarters in Winnipeg recorded the brutal attack of a man in the city's downtown area Saturday.

The body of Stony Stanley Bushie, 48, was found in an alley behind 333 Portage Ave. on Saturday evening.

He was one of two men who were found dead in the downtown area that day. Police think they were likely both killed by the same person.

​Naomi Clarke, an executive producer at APTN, told CBC News that one of the building's security guards discovered a body behind its Portage Avenue building at about 6:30 p.m. Saturday.

The guard called police, who arrived and spent hours investigating the scene. Clarke said the building's surveillance cameras recorded the man being beaten to death with what appeared to be a blunt object.

Police have since confirmed that the body found behind the Portage Avenue building was that of Bushie.

Clarke said when she heard about the body, APTN news cameras were dispatched to record the scene.

"We decided we needed to send a camera and capture what was going on in our own backyard," said Clarke, adding that Winnipeg police then seized that footage and a news camera for the purpose of their investigations.

"[Police] felt they had the right to do so," she said.

"I said it was illegal, in our opinion, they were doing that, that we were trying to do our jobs and they were preventing us essentially from doing our job that night."

Clarke said police gave the equipment back to APTN about an 1½ hours after it was seized. Still, she said police had no right to take their camera and that footage, which recorded the scene after the crime and wouldn't have advanced the investigation.

"It was a violent murder and so it was pretty gory, and they didn't want those images going out and potentially identifying the victim."

Clarke said police must have assumed APTN would have "broadcast gore for the sake of broadcasting gore."

"We're professionals and we would have the utmost respect for the family and the deceased," she said. "It was still my argument they were not allowed to legally seize that camera and footage."

APTN has since published still images taken from footage of the crime scene, blurring out certain aspects out of respect for the victim's family and friends.

Clarke added that APTN has co-operated with the authorities since the moment Bushie's body was located, and turned surveillance footage over to police Saturday night.

Images of a person of interest were released by the police on Sunday — images that Clarke said did not come from APTN's surveillance cameras.

Clarke said some of the staff at APTN have seen raw photos of the incident.

"That's had an impact, of course, but overall on the staff and building, a lot of them are obviously having safety concerns and feel violated. We had a smudge ceremony this morning with our elder — we wanted to do it in the back, but that scene hasn't been released."

Police have issued an alert to the city's homeless shelters, asking people on the streets to stay in pairs and not go into secluded areas.