Provincial court Judge Murray Thompson has found Andrea Giesbrecht of Winnipeg guilty of disposing of the remains of six infants in a U-Haul storage locker.

Andrea Giesbrecht has been found guilty of disposing of the remains of six infants in a U-Haul storage locker.

"All of these children were likely born alive. There is no evidence of complications in these pregnancies," provincial court Judge Murray Thompson said Monday in finding the 42-year-old Winnipeg woman guilty on six charges of disposing of a body of a dead child with intent to conceal the delivery.

Each charge carries a maximum sentence of two years behind bars. Giesbrecht will remain free on bail until her sentencing hearing.

Her defence lawyer, Greg Brodsky, said Giesbrecht is content the judge reached a conclusion in her case.

"She's not happy with the result of the conclusion, but she's happy that it's coming to an end," he said.

When asked if he knew why his client kept the bodies of her dead children in a locker, Brodsky said, "No."

Brodsky said his client will wait until she hears details of the sentence before deciding whether to appeal.

The judge said in his ruling he was convinced that Giesbrecht was the mother of all six infants — five males and one female — and that she stored them with the intention of concealing their births as they decomposed in plastic bins and pails.

"These bodies were not stored for purposes of preservation," Thompson said.

What caused the deaths of the infants could not be determined because the remains were too badly decomposed.

Giesbrecht did not testify during her trial, leaving many questions surrounding the babies unanswered.

Their bodies were found in plastic grocery bags, in some cases wrapped in towels and then sealed in household containers. One of the infants was found encased in concrete, and another in a substance similar to laundry detergent. 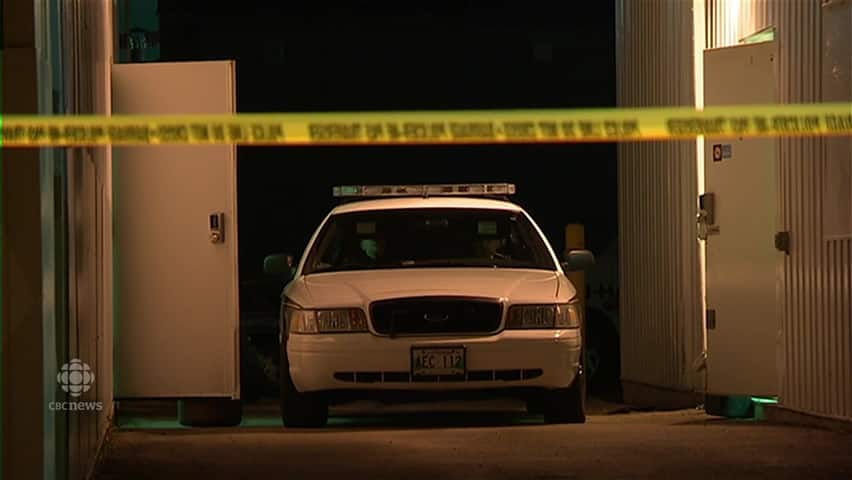 4 years agoVideo
2:01
Andrea Giesbrecht has been found guilty of disposing of the remains of six infants in a U-Haul storage locker. 2:01

Thompson said the disposal of the remains was "done in an effort to contain the smell of human decomposition and decay."

In order to determine guilt, Thompson said, Giesbrecht had to be shown to have disposed of a baby's body in an effort to conceal its mother had given birth to it. The Crown also had to show the child was likely alive when it was born and that Giesbrecht would have known the child was alive.

The Crown in making its case, satisfied each of the criteria, Thompson said. As the mother of two sons, Giesbrecht understood birth and pregnancy, he said.

"All of her actions lead to one conclusion, that Giesbrecht was aware these children were likely to have been born alive and she wished to conceal the fact of their birth."

The infants' remains were found Oct. 20, 2014, by employees at the Winnipeg U-Haul storage facility in a locker Giesbrecht rented under her maiden name, Andrea Naworynski.

Giesbrecht took additional steps to conceal the fact she had rented the locker, Thompson said. She gave U-Haul an incorrect home address and refused help from a friend who had once offered to move storage items for her.

Employees called police after finding an infant's limb when they went in to clean out the locker because rental payments had not been made.

Giesbrecht was arrested the same day.

She pleaded not guilty to all six charges when her judge-only trial began on April 18, 2016.

Initially, the Crown looked into laying homicide charges in the case because they could not prove the children "proceeded in a living state from the body of the mother," Thompson said.

The goal of the law Giesbrecht was found guilty of, Section 243, is to facilitate the investigation of potential homicides, Thompson noted.

'It wasn't a disposal, she was saving'

In October, Giesbrecht's lawyer argued in court that "conceal means to hide, it does not mean to keep. Dispose means to get rid of, not to save."

In a phone interview last week with CBC News, Brodsky maintained that position, as he did after the decision was read Monday.

"Concealment is not a disposal. And the fact that she paid the money by way of contract to keep the products of conception would mean that she was saving them, not disposing of them," he said.

"It wasn't a disposal; she was saving. For what purpose I don't know."

But the judge rejected Brodsky's argument. He said the manner in which the infants were stored caused the bodies to decompose and that meets the definition of disposal.

Due to limitations of the charges Giesbrecht faced, she could not be compelled to provide a blood sample, but police were able to locate her DNA on a sanitary napkin left in her closet.

The court heard there were no other women living in the home at the time the menstrual product was found.

Forensic biologist Christine Crossman testified later at trial that DNA found on the sanitary napkin matched that of the babies found in the storage locker. DNA tests also linked the babies with Giesbrecht's husband, Jeremy Giesbrecht.

The husband had a vasectomy in 2011, but told the court he did not go for a followup check to see if the procedure was successful.

A Winnipeg forensic pathologist testified that umbilical cords were attached to the remains of at least two babies. One of the infants was found liquefied in a plastic bag, another as a skeleton with no tissue and another was encased in a concrete slab found in a bucket.

The court was also told a large Tupperware tub contained two bags, each with remains inside. There was also a smaller tote that contained one body and three pails that each contained a body.

One of the bags contained several other items, including three toy cars, size 4 children's Scooby Doo underwear, an infant's socks, a plastic beaded necklace and McDonald's Happy Meal instructions for a toy.

All six infants were between 34 and 42 weeks of gestation.

Thompson said Giesbrecht was healthy and none of the babies showed signs of congenital defects or injuries.

Medical expert Dr. Sharon Naugler told the court the likelihood of Giesbrecht delivering six stillborn babies was one in 500 trillion.

During the trial, Crown prosecutor Debbie Buors said the infants were "carelessly packaged" and "cast aside," hidden away and unloved by the woman who did everything to conceal her pregnancies.

If the Crown could prove the babies were definitely born alive "we'd be here on a whole different set of charges," Buors said.

​The trial heard Giesbrecht had 10 therapeutic abortions between 1994 and 2011. An obstetrics and gynecology expert testified Giesbrecht was pregnant at least 18 times between the ages of 20 and 38.

There is still no explanation offered as to why the remains were placed in a storage locker.

"I've seen strange cases in my time. This is one of the stranger ones, or maybe the strangest," Giesbrecht's lawyer Brodsky said.

Media outlets were given a rare opportunity Monday to stream the judge's decision live. It was carried on CBCNews.ca. 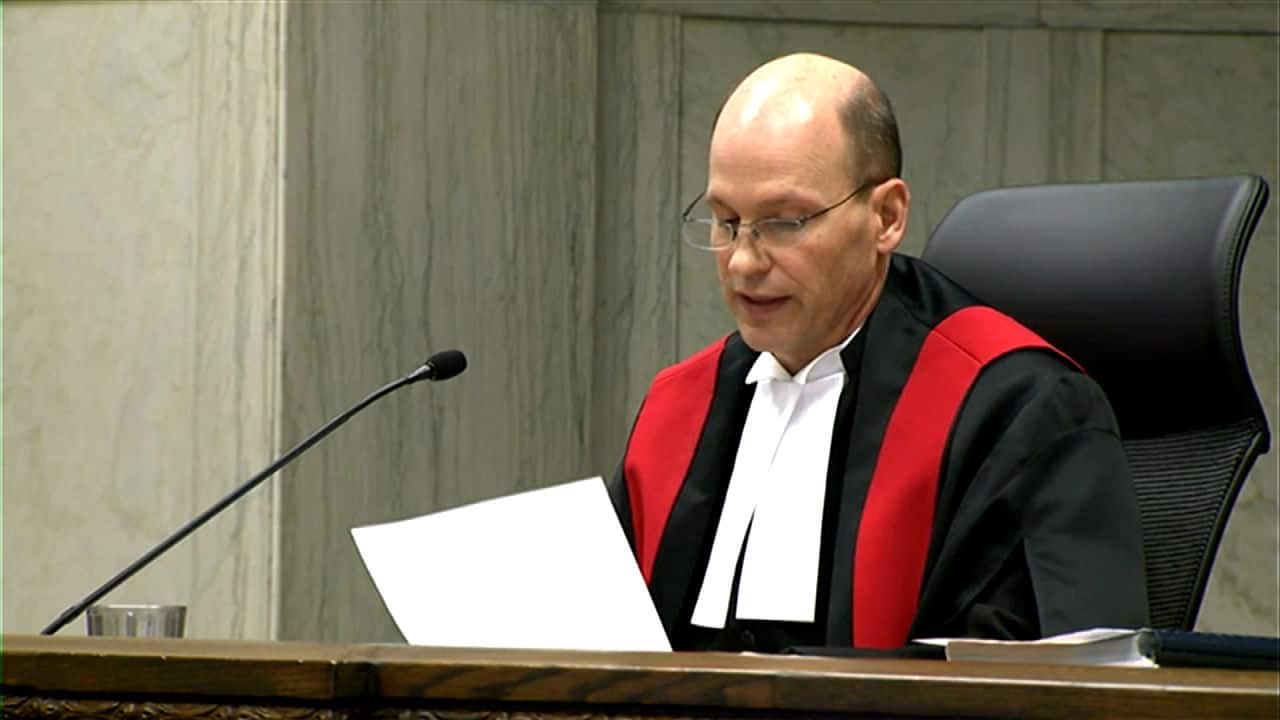 With files from The Canadian Press and Caroline Barghout