Angela Gladue says she felt "disposable" when a Winnipeg taxi driver refused her a ride when she wouldn't pay upfront after being chased down Portage Avenue.

An Edmonton woman says she's still in shock after being refused a cab ride when she asked a Duffy's Taxi driver for help Monday night.

Angela Gladue, who was in Manitoba to perform at the Winnipeg Folk Festival last weekend, said she was being chased down Portage Avenue by a strange man when she hopped in a cab for refuge.

Gladue said she was taken aback when the driver asked for cash upfront.

"I said 'Yes, I do have money, but you have to go now. I will pay you, just start driving — there is a man coming and I am really scared,'" said Gladue, a powwow dancer who dances with the Ottawa electronic music group A Tribe Called Red.

Gladue said she was in fear for her safety and couldn't think of anything else but getting away.

She said she has been asked to pay upfront by Edmonton taxi drivers in the past and has done so, reluctantly.

The driver wouldn't go, even when the man who was chasing her caught up and began pacing back and forth beside the cab, she said.

"I was, like, 'Are you refusing me service right now? My life is in danger,'" she said.

"Then I brought up missing and murdered Indigenous women and what he was doing felt like racism toward me, and I told him that."

Gladue said she told the driver she was going to report him, took video of his cab number, and then got out when she saw another taxi pull up.

She said she was so upset at this point she didn't notice if the man who was chasing her was still outside.

She explained to the second driver what had just happened and said he told her to walk the four blocks to the Fairmont hotel.

"I had to beg him, and I started crying — by this point, I was just in tears because I just felt humiliated," she said. 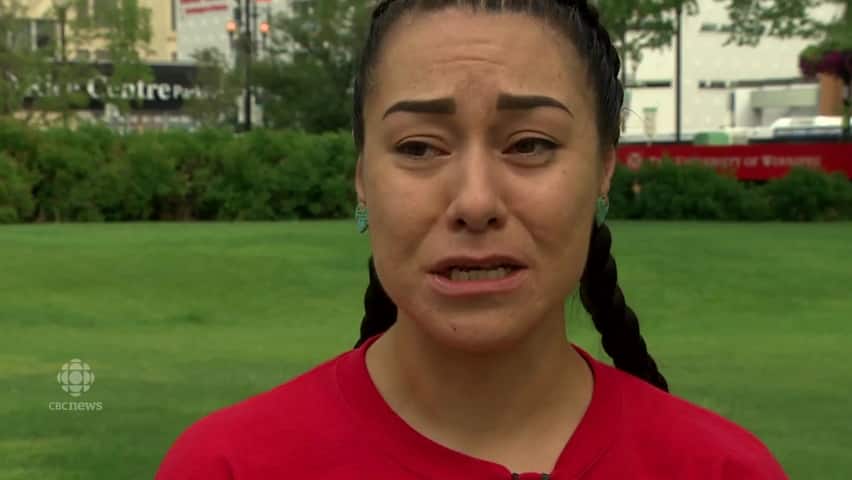 3 years ago
0:39
Woman in Winnipeg to perform at the Folk Festival, says cab driver insisted on payment upfront. 0:39

'This is the reality I have to think about'

Gladue, who is Cree, said she thinks about MMIWG every day. She said growing up, her mother told her stories about violence against Indigenous women and ingrained safety messages into her.

"Even when I was walking back from the studio [Monday] I was, like, 'There's a white van, watch out for that van, are they going to circle around?'" she said.

"I might seem like a crazy person or super paranoid, but this is the reality I have to think about all the time."

Gladue said she has donated her time as a choreographer and jewelry designer to MMIWG fundraisers and awareness events.

She hopes sharing her experience will draw attention to this issue.

"I just felt disposable, like I didn't matter," she said.

Gladue said she learned about Ikwe Safe Rides after telling Winnipeg friends about what happened to her. The donation-based ridesharing group for women has currently over 17,000 members on Facebook, where it operates.

She said she tried to report the driver to Duffy's but the supervisor's email inbox was full.

In an emailed statement to CBC News, the taxi company said it has not received a formal complaint but has "reached out to the parties in question" and "initiated an internal investigation."

"This is a terrible situation," the statement said. "No one should feel unsafe while walking the streets of Winnipeg."

Gladue said she also reported her experience to the City of Winnipeg, which now regulates the taxi industry.

The city confirmed it has received Gladue's complaint and is investigating.

The Winnipeg Parking Authority "does look into every complaint that is received through its designated complaint process, which is laid out on the Vehicle For Hire web page," a city spokesperson said in an email to CBC News.

The spokesperson said there have been 48 formal complaints on vehicle-for-hire operations since March 1, 2018.

The city's Vehicles for Hire bylaw outlines circumstances under which a driver can ask for prepayment.