A group of people with health issues living at a downtown Manitoba Housing highrise say they feel stuck in a dangerous, dirty building and their complaints are not being heard by Manitoba Housing staff.

A group of people with health issues living at a downtown Manitoba Housing highrise say they feel stuck in a dangerous, dirty building and their complaints are not being heard by Manitoba Housing staff.

The six tenants gathered in the lobby of the highrise on 444 Kennedy Street to speak with the CBC about their worsening health and safety concerns, including problems with bed bugs, cockroaches, mice and crime. They say their attempts to advocate for improvements have been met with eviction notices.

On Tuesday, MLA Nahanni Fontaine brought the concerns up during question period. She asked the government whether the Kennedy Street building would be cleaned up and the issues with crime addressed.

John Dunnec has shared his one-bedroom apartment with cockroaches for the past four years.

"It's horrible to live here," said Dunnec, who suffers from end-stage renal disease and can't work or afford to live anywhere else.

Manitoba Housing runs a pest-control program in the building, and before units are sprayed, tenants must prepare their suites by cleaning and taking everything out of cupboards, he said.

Not everyone complies, said Dunnec. He keeps his own unit clean, he said, but the cockroaches crawl in from the neighbour's suite.

"Things that are dirty, it's a risk to me. I could be sick and die, quite frankly. It affects your self-esteem, your self-worth," he said.

"I would love to move but I'm kind of stuck here."

His neighbour, Fern Barthelette, is also fed up. He has three traps lined with dozens of dead American cockroaches in his bachelor suite.

"I really hate bugs but I mean it's not my fault that I can't empty my cupboards. They expect us to about two times a month and live like that," said Barthelette, who has borderline personality disorder, depression and anxiety. 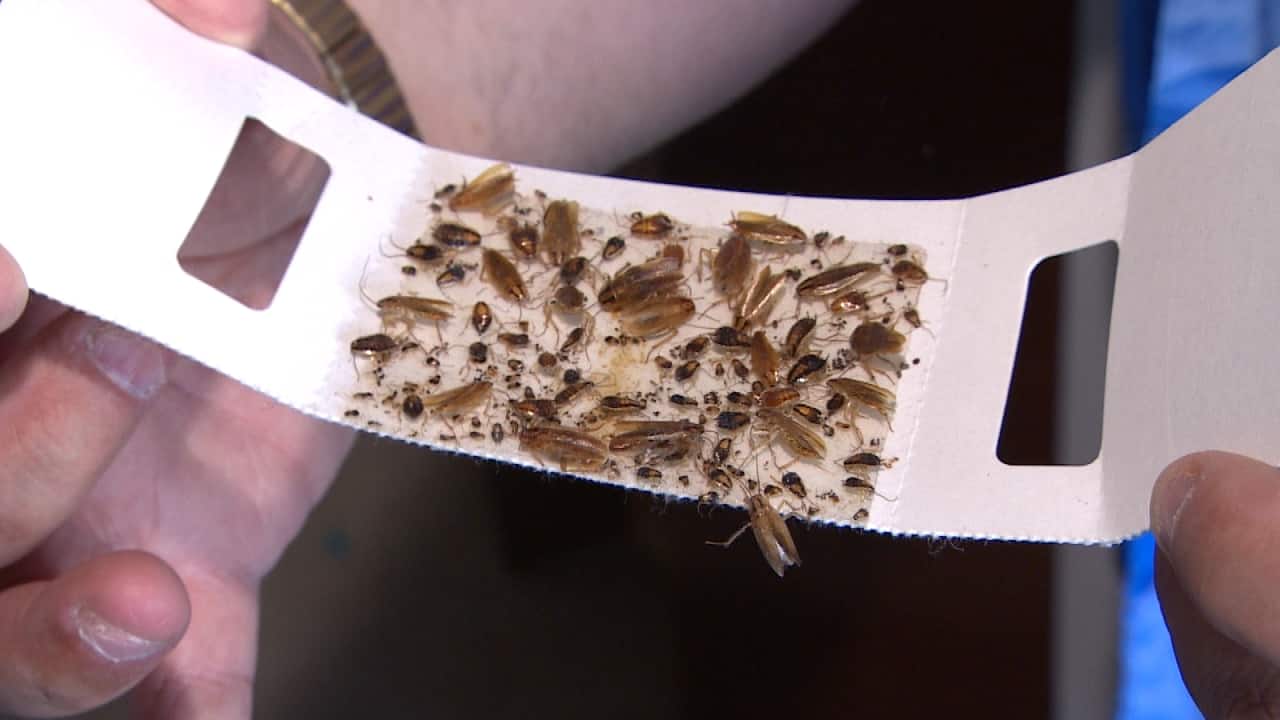 4 years agoVideo
2:27
A group of people with health issues living at a downtown Manitoba Housing highrise say they feel stuck in a dangerous, dirty building and their complaints are not being heard by Manitoba Housing staff. 2:27

He's unable to reach into his cupboards to clear everything out twice a month because of arthritis, he said. Manitoba Housing has given him two eviction notices for his failure to comply with the measures.

"When they give us those eviction notices my anxiety goes through the roof and same with my depression," he said.

The criminal activity in and around the building and near-constant police presence is also a concern for tenants.

"This whole neighbourhood is a war zone," said Dunnec.

Last year, he said, police uncovered a crack den in the unit across the hall from his. In December 2016, there was a homicide at the building. Other serious assaults have happened in recent months, he said; parties and drug deals happen all the time.

"It's like being in Las Vegas where people just walk around with open liquor. It's not a safe place," he said.

He said he's repeatedly asked building management to extend on-site security staff hours, as currently, security only works overnight,  and he's complained about the bugs. But it doesn't get him anywhere, he said.

Barthelette has also tried to ask for help from building management for cleaning his house before the bug treatments. He too, worries about his safety.

"They threaten us with the eviction notices. We're classified as troublemakers and we're the ones being punished for wanting to have a safer building, meanwhile they're letting in people that shouldn't be in the building at all."

A spokesperson for Manitoba Housing said the last treatment for bedbugs and cockroaches at the building was on May 5, and inspections happen prior to treatments to streamline the process. The Integrated Pest Management Group, created by the province in 2008, deals with all issues with pests across Manitoba. Assistance is available to people who need help preparing their units for treatment, according to the spokesperson, if they meet with the tenant services co-ordinator.

Requests for an interview to both Manitoba Housing and the Minister of Families, Scott Fielding, were declined because of a media blackout during the Point Douglas byelection.

The tenants hope someone listens to their concerns and offers more help.

Cari La Riviere has lived in the building for five years and hopes this is the year she sees some improvement in the living conditions.

"The pest problem is constant, the way you're dealt with from management just stomps all over your mental health, the criminal element that's been coming into the building in this last year has been unreal. You're not safe in the neighbourhood, but now you're not even safe in the building," she said.

She agrees that 24-hour security would help, but a little kindness from Manitoba Housing staff would also go a long way. She's also facing an eviction over unpaid rent, which she said will be paid by the end of the month.

"They don't work with us. They are not at all helpful to the tenants. And that's not what I was given to understand what Manitoba Housing was all about when I was first moving in here."

But the threat of the street looms large, and she doesn't have any other options.

"We need the help. We can't advocate for ourselves. And they know it."