'They didn't want me,' says witness who tried to pummel dogs with bat. 'They really, really wanted him.'

A Winnipeg man who tried to break up a vicious attack by a group of dogs that sent three people to hospital says the animals were going for blood.

Devin Wasnik says the dogs, who terrorized people in a Winnipeg motel parking lot early Saturday morning, were intent on mauling one of the men.

He says he was effectively ignored as he tried to beat the dogs off with a small bat.

"They didn't want me, even though I was hitting them."

The chaos was described as something like a scene from a horror movie.

"I know lots of people were traumatized just being there," Winnipeg Police Service spokesperson Const. Rob Carver said at a Saturday press conference. "It must have been an absolutely terrifying scene."

He said staff at the veterinarian hospital compared the attack — which involved three adult dogs and one puppy — with Stephen King's 1981 horror novel Cujo, about a rabid St. Bernard.

"The term 'Cujo' was used for even the puppy, so these were violent dogs," he said.

Two people, who Carver said know each other, are still in hospital with "severe, life-altering injuries."

An employee at Capri Motel confirmed the attack happened at their parking lot, which is on Pembina Highway near Bishop Grandin Boulevard. By the afternoon, splatters of blood stained the snow and puddles of water.

Police received a report of a fight in the parking lot around 12:30 a.m. Saturday — but that assessment changed within minutes, Carver said.

Wasnik says he couldn't ignore the commotion outside his motel room.

"When I saw this guy getting like mauled by these dogs, I jumped in my car and I tried to run one over."

His adrenaline taking over, Wasnik leapt from his vehicle and pounded the dogs with a bat, but they ignored his attack. Instead, the man they wanted dragged himself into Wasnik's vehicle, he says. The bites caused deep gashes across his arms and right calf.

"When I saw the amount of blood that he was hemorrhaging like I'm so shocked he's alive, I'm so shocked. He was so scared, like, 'I'm done, I'm done, What am I going to tell my mom?'" Wasnik remembers him saying.

Thirteen police units, including general patrol, canine and tactical support — plus the Winnipeg Fire Paramedic Service and City of Winnipeg Animal Services — were required for the incident.

Devin Wasnik explains how he tried to break up the vicious dog attack: 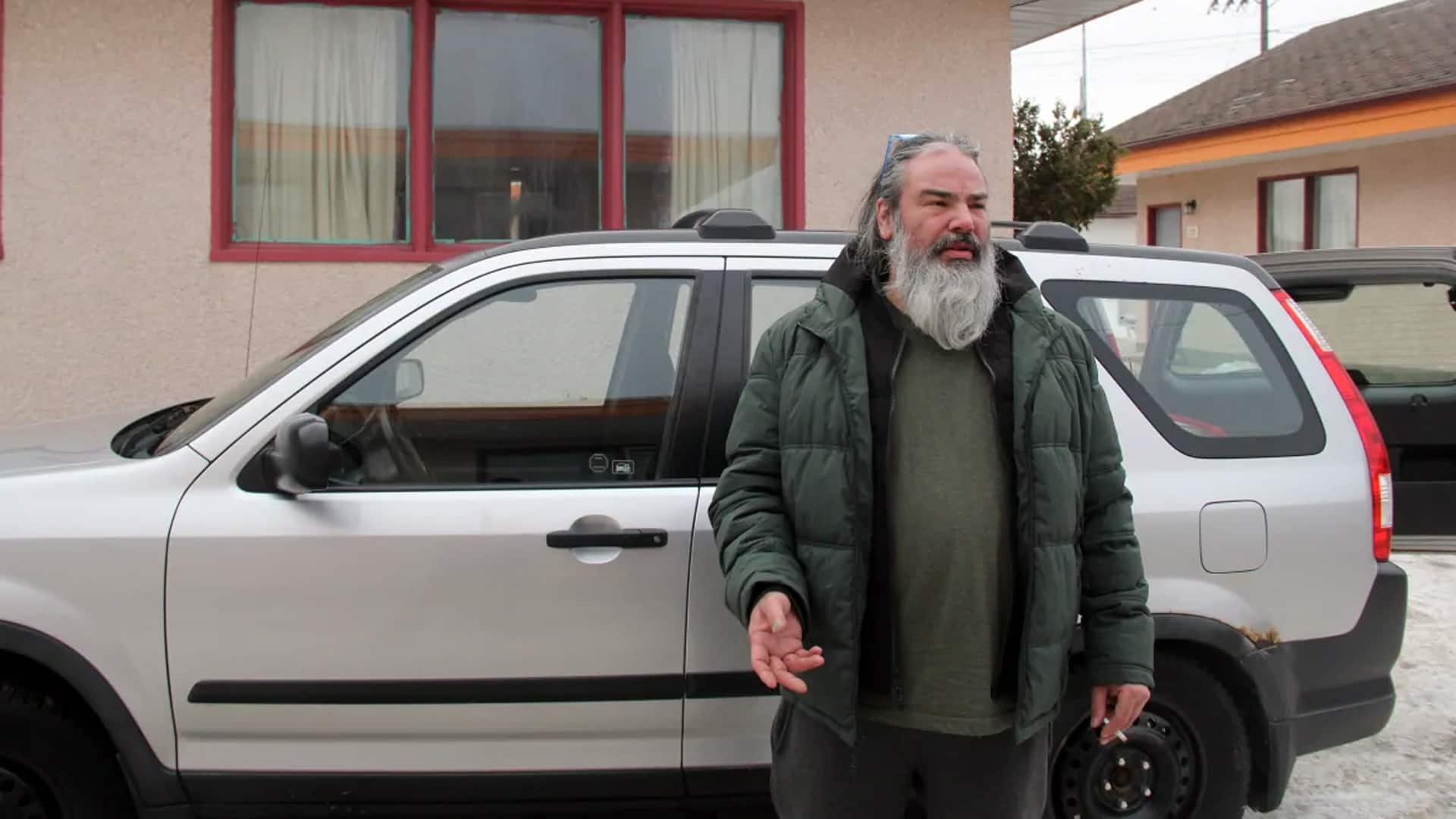 11 months agoVideo
2:42
The three people attacked by the pack of dogs were taken to hospitals. A Winnipeg man who tried to break up a vicious attack said one of them appears to be the dogs' owner, although police have not finished doing interviews yet. 2:42

Police said the dogs tormented people in the parking lot before crossing Pembina Highway and leaving the area. Two made it across the road unscathed.

Officers found them in nearby neighbourhoods and shot them — a decision Carver said is never made lightly.

"No officer would ever put down a dog with any other option, and I believe last night they had just run out of every option," he said. "You can't have dogs of this nature running around the neighbourhood. Someone could have got killed. We're actually lucky no one got killed last night."

Violent dog no longer at large

The other two dogs — an adult and a puppy — were hit by a vehicle on the road, Carver said. The puppy was taken to a veterinarian and treated.

But the adult dog was still on the loose overnight, with police warning people in the area to avoid the dog and call 911 if they spotted it. Carver said police units were out until around 2 a.m. looking for the fugitive dog until the canine unit lost the track.

The runaway animal was found late Saturday morning and is no longer at large, police said.

Carver said police received multiple calls during the chaotic scene, which caught the attention of people in nearby apartment buildings and in the Pembina Highway motel's suites and parking lot — some who were almost attacked themselves.

"I think people were trying to go out and maybe help them, but then being chased back into units by the dogs," Carver said.

The three people attacked were taken to hospitals. Carver said one of them appears to be the dogs' owner, although police have not finished doing interviews yet. He said the dogs are believed to be pit bull-mastiff crosses.

"I believe the most [seriously] injured of the three is now being determined to likely be the owner," he said. "You can imagine, and I'm just going to surmise here, but if you are the owner of dogs and it was this kind of incident, you're not exactly leaping up to go, 'Hey, those are my dogs.'"

Carver said it's too early to say whether the dogs' owner could face charges, though possibilities range from bylaw infractions to criminal charges.

He said all three victims are from Winnipeg. Police don't believe any of the victims were staying at the motel.

Police had no updates Saturday afternoon on the condition of the people who were injured.

With files from Dana Hatherly