A farmer near Lucan, Ont., got a surprise when one of her cows gave birth to rare set of triplets on New Year's Day. 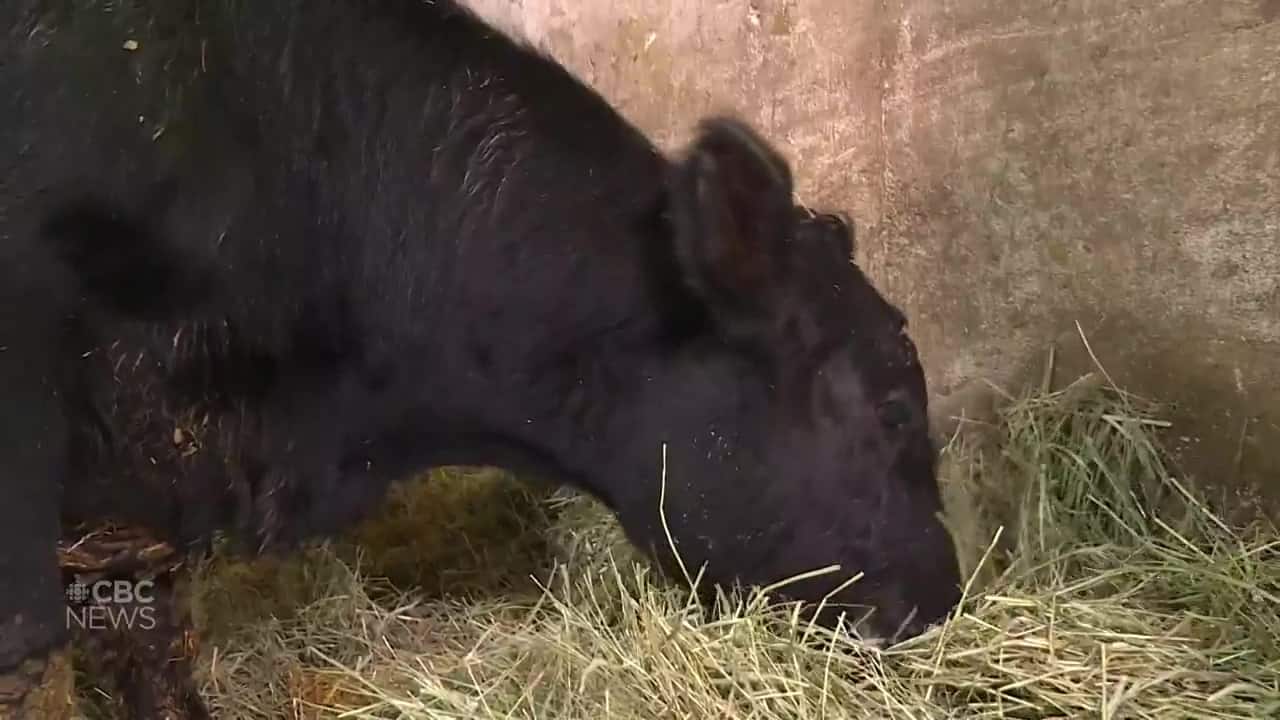 A farmer near Lucan, Ont., got a pleasant surprise when one of her cows delivered a rare set of triplets on New Year's Day.

Belinda Bowman is the owner of the BB Cattle Company in Granton, Ont., a hamlet just south of Lucan. One of her cows delivered a rare set of triplets.

"It's not something I was expecting, that's for sure."

Bowman said she noticed one of her cows was in labour on Jan 1. When she returned to check on how the animal was doing, she thought it was twins at first.

"We realized there was a third calf with no mom assigned to it and as soon as we stood that baby up, the mother of what we thought was twins cooed to it and rounded all three of them up."

Bowman named the calves Sharon, Lois and Bram, at the suggestion of one her social media followers.

The odds of a cow delivering triplets is between 10,000 and 100,000 to one, according to Dr. Stephen LeBlanc, a veterinarian and professor at the University of Guelph who studies cattle reproduction and health.

"We don't have a lot of stats because it's rare," he said. "Certainly because it's not the biological norm for cattle. They usually just have one calf at a time, or occasionally twins. Those calves would be at a greater risk for still birth or mortality after they're born."

"It's an uncommon occurrence to be sure."

LeBlanc said while twins and triplets among cows are rare, it does happen and female twins in particular run the risk of being infertile if they're born as part of a mixed-sex set. When they do, they're called freemartins because they can exhibit masculinized behaviour and possess a set of non-functioning ovaries.

"As far as I know it's unique to cattle. It may happen in other species. It has to do with how the placenta is formed and there's some exchange between the two fetuses even though they have separate placentas. It happens early in embryonic development and it's a quirk of biology."

It isn't the only quirk these triplets have been born into. Bowman has also found a wet nurse in the form of a dairy cow named Buttercup to help out Sharon, Lois and Bram's with weening.

"We brought Buttercup onto the farm and it's the best money I've spent in a long time. She is sweet. I got lucky that way. She coos to those cows like they're her own," Bowman said.

Before Buttercup came along, Bowman and Jeremy O'Shea, who works alongside her at the farm, were giving the triplets up to nine bottles of milk a day.

Now, Bowman said, all five live together, like a modern-day human family.

"A family of five. Two moms. Everything goes in this world now, so why not in my barn?"