A necropsy has linked dozens of mysterious pigeon deaths in an east London neighbourhood to Avitrol, a controversial and highly toxic pesticide that has been outlawed in London and several other parts of the province.

A necropsy has linked dozens of mysterious pigeon deaths in an east London neighbourhood to a controversial and highly toxic pesticide that has been outlawed in London and several other parts of the province to protect vulnerable bird species.

Starting in late August, residents at a cluster of apartment buildings along Mornington Avenue began seeing dozens of pigeons falling from the sky, lying on their backs, walking in circles, or seemingly convulsing as part of a languishing death, then left to rot where they fell.

A CBC News investigation into the bird deaths triggered three provincial investigations and led to landlord Northview Properties REIT to fire Brampton, Ont.-based Husky Pest Control; the company hired to deal with a pigeon infestation at Northview-owned buildings in the area.

Now a necropsy on one of the dead birds found in the area suggests it died from corn laced with Avitrol, a restricted avicide outlawed in London and other parts of Ontario to protect endangered peregrine falcons.

'Avitrol is likely the cause of death'

The bird was examined by Dr. Brian Stevens, a wildlife pathologist with the University of Guelph who also works with the Canadian Wildlife Health Cooperative, a national network of scientists and researchers who monitor wildlife disease across Canada.

Stevens said the bird that was sent to the University of Guelph lab by CBC News had no obvious signs of trauma or underlying disease.

When he dissected the bird and looked at its internal organs, he found the pigeon's crop, an expanded muscular tract near the throat that acts like an esophagus to temporarily store food, was filled with corn. The bird's gizzard, or stomach, also contained digested corn.

"I submitted samples from that bird for Avitrol testing," he said. "[The samples] came back positive for Avitrol."

"There's no evidence of any other disease that has killed this bird. It looks like the sudden death of the bird, combined with the secondary presence of Avitrol, is likely the cause of death."

Pesticide is supposed to be non-lethal 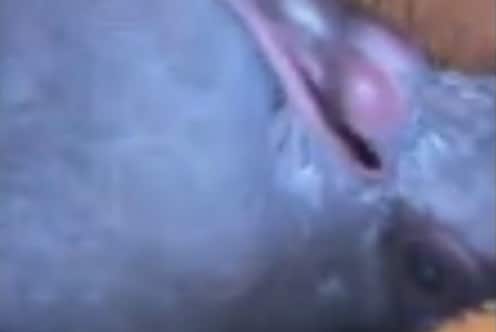 5 months agoVideo
0:44
A London, Ont. woman cradles a seemingly convulsing fledgling pigeon in her arms as it dies from suspected pesticide poisoning. 0:44

According to the Pesticide Management Education Program at Cornell University in Ithica, New York, a lethal dose of Avitrol for a pigeon is 3.7 mg of Avitrol per kilogram of corn.

Stevens said there is no way to tell how much of the pesticide the bird ingested, but the lab where the sample was tested estimates the corn inside the bird's crop contained around 100 mg of Avitrol per kilogram.

"The levels were above the calibration range, so it's just an estimate. I can't say for certain how much this bird had in its system," he said. "There's no other reason this bird would have died."

According to the manufacturer, when administered correctly, Avitrol isn't supposed to be fatal. The pesticide was designed to be administered in low enough amounts to simply scare birds away with "little to no mortality" by causing at least one of the birds to experience neurological symptoms caused by the pesticide.

"It's supposed to scare off the flock and that bird, if it's given a non-lethal dose, should recover and then determine this isn't a safe place to be and fly away. That's the theory behind it," Stevens said.

Except, that's not what happened, according to residents. They reported seeing dozens of sick, disoriented and dead birds all around their homes, including pigeons, starlings, mourning doves and blue jays, many of which were thrown into the trash because they were being left to rot on lawns, sidewalks and parking lots.

The problem is, Stevens said, pesticides don't always work the way they're supposed to and avicides, much like rodenticides, sometimes end up killing species that were never intended to be targeted in the first place.

Stevens said he performs a number of necropsies on raptors each year that appear to have died after eating rodents that have been poisoned by humans.

"We don't have a good handle on a lot of these poisons that are out there in that, this is the way we've been using it for a really long time. I think people are starting to realize, sure, it's doing what we want it to do but it may be having broader impacts than we expect."

It's a lesson Hershel Upadhyay, the owner and director of Brampton, Ont.-based Husky Pest Control, has likely had to learn the hard way.

He told CBC News his company had been looking after the Northview-owned properties for approximately two years and the application of Avitrol at the buildings on Mornington was "the first time ever" his company had used the pesticide.

He said his company checked to see if the chemical couldn't be used under city bylaws, despite the fact use of pesticides is governed by provincial and federal legislation.

"We are not using it anymore. We have discontinued using it," he said, noting that since CBC News first reported the story Husky has lost a number of jobs, including its contract for buildings owned by Northview.

"This job has cost us a lot of money. We're losing business like crazy. It's unfortunate it's happened. We're a small company," he said. "We can't even afford a lawyer."

Upadhyay said he employs eight staff members and, to his knowledge, the Avitrol used at the Mornington Avenue job site was mixed according to label instructions in accordance with federal law.

He also said he is fully cooperating with an investigation by the Ministry of Natural Resources that is trying to determine whether poisoning the birds was contrary to the Ontario Wildlife Conservation Act.

As for the dead birds, Upadhyay said he was sending a staff member to the job site to pick them up several times a day.

"We were picking them up," he said. "We had been going there on weekends."