Modular homes can be built quicker and cheaper, both pluses in a city short of housing

As London continues to face a staggering shortage of affordable housing, city staff are looking to modular housing as a partial solution to a problem that's grown worse since the COVID-19 outbreak.

This week a city council committee gave in-principle approval for staff to explore the construction of modular permanent housing units to address the need. It's an idea in its early stages, there's no funding and it's not yet clear exactly what form the housing will take

Kevin Dickins, the city's acting manager of housing, said the severity of London's housing crisis requires innovative approaches and this is something staff want to explore.

"We've been very clear all along: We are in a housing and homelessness crisis in London," Dickins said. "Anytime that we can look to build permanent and affordable housing quickly and easily, it's something that we should be looking to do."

He said some companies are building two- and three-bedroom units that are stackable and can be fitted with elevators if needed.

A modular housing form means construction, site preparation and zoning approval can happen at the same time, which means the units can be built quickly and often more cheaply than standard housing forms.

That matters in a city where staff say there was a need for 3,000 affordable housing units in London before the COVID-19 outbreak hit in early spring.

"Each unit is essentially pre-fabricated in a factory," said Dickins. "It's transported to the site, they're fastened together."

He said a market is developing for this type of housing, and said Vancouver and Toronto have used forms of modular housing with some success.

Dickins said the locations aren't being released publicly yet to avoid interfering with any re-zoning that would be required.

At this point there is no city funding attached to the modular housing idea, but down there road some city money will be needed along with federal government money, which Dickins is now pursuing.

For now the city and its Housing Development Corporation will work together to seek money from senior governments and look at options for housing designs and providers. The committee's endorsement must be ratified by council at its Tuesday meeting.

Staff plan to report back when they have a firmer idea about the cost and funding sources for the project.

Dickins said modular housing won't provide a complete solution but it may provide some relief for those waiting for a place to live they can afford.

"We're really excited about this," said Dickins. "It's an opportunity for us to move forward a strategy where we can try to accomplish the development of something safe, esthetically pleasing and permanent." 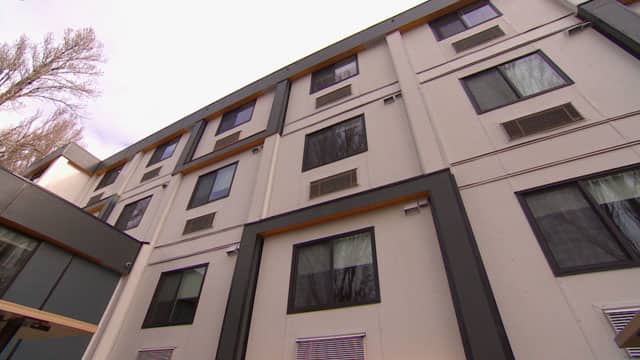 3 years ago
4:59
Canada's housing crisis, particularly in Vancouver, is a well-documented problem, one that has been without a fix so far — but some officials believe that modular housing is the solution. Proponents point to plans in other big cities like New York, London and Dublin as the blueprint to solving the housing crisis here 4:59