Aylmer police are reviewing video footage taken Sunday at the controversial Church of God, where about 75 people crammed inside for a sermon and to sing Joy to the World, none wearing masks or socially distancing. 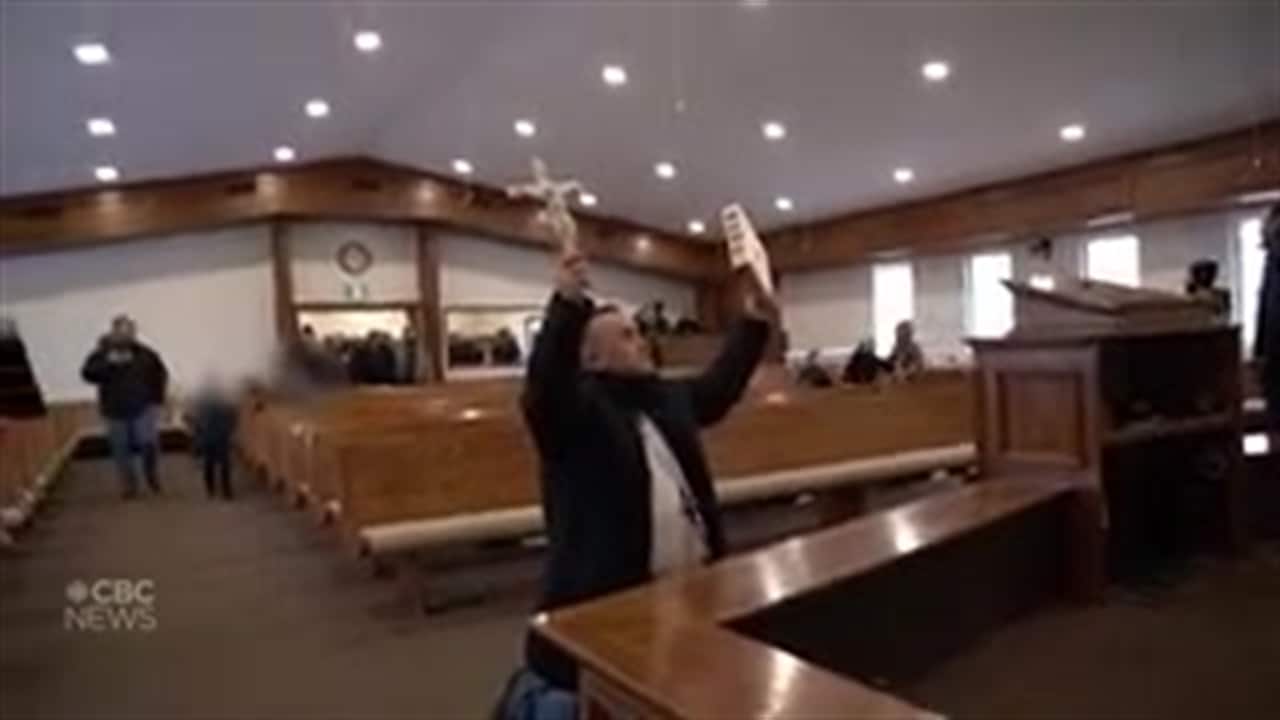 1 month ago
0:51
Video posted to YouTube by the Church of God in Aylmer, Ont. shows the pastor preaching in the parking lot, then inviting the congregation inside the church on Jan. 24, 2021. 0:51

Aylmer Pastor Henry Hildebrandt continued to defy the province's stay-at-home order, leading about 75 people into the Church of God building in the small town, delivering a brief sermon and leading the congregation in a song.

All of it was posted to the church's social media channels prompting Aylmer police to go through the footage in an attempt to identify the congregation members present so charges can be laid.

"We're reviewing all of the evidence that has been gathered and the officer assigned to it is going through it and will be laying charges against everyone that we can identify in the church service," Aylmer Police Chief Zvonko Horvat told CBC News Monday morning.

Officers didn't attend the church service but did get a number of complaints about it, Horvat said.

The hour-long video begins in the Church of God parking lot, with Hildebrandt preaching. He then invites whoever wants to join him to come inside for a tour of the building.

The congregants file in and no one appears to be wearing masks or to be socially distancing, both public health measures aimed at slowing the spread of the deadly coronavirus.

Hildebrandt has been charged previously under the Reopening Ontario Act for defying the province's COVID-19 health measures. In the past, police have not targeted individual members of the congregation.

Joy to the World

Hildebrandt has become the face of the anti-lockdown movement in Aylmer, Ont., where 2,000 people marched through the streets of the small town to protest masking and other other public health measures.

After listening to Hildebrandt speak, the congregations sings Joy to the World. At one point, Hildebrandt jokes that he forgot to tell people that masks are available at the doors, to the amusement of the crowd.

Ontario's emergency orders were put in place earlier this month and ask that people stay at home, leaving only for essentials. The province has asked people to limit close contact to only people in the same household.

Religious services are allowed to have a maximum of up to 10 people, and outdoor gatherings are limited to five people, socially distanced, and wearing a mask. Organizers can be fined a minimum of $10,000 for breaching the orders, and each attendee could receive a $750 ticket.

"Aylmer Police are reviewing evidence of an Emergency Orders breach that has occurred during the service and are currently in the process of identifying individuals who participated and violated the orders," police said in a statement.

The police service will also consult with Southwestern Public Health about how to work with the Church of God group to reduce the risk of exposure and harm within Aylmer.

"Community safety and well being and enforcement of laws is our top priority during this global pandemic. Aylmer Police are asking the citizens to exercise patience as we sift through the evidence and lay appropriate charges during the latest blatant violation of the emergency Orders by this particular group," Horvat said in a statement.

"Irresponsible actions of those involved will not be tolerated."

Tiny Aylmer, Ont., has has 348 confirmed cases of COVID-19 since the pandemic began, and currently has 27 active cases.