Canadian artist Tom Benner, known for his larger-than-life sculptures and focus on nature and the environment, has died in London, Ont., the city he called home. He was 72.

Lifelong resident of London, Ont., had a deep 'love of nature and the environment'

Tom Benner, the Canadian artist whose larger-than-life sculptures depicted nature and forced audiences to reflect on themselves in relation to their environment, has died.

Benner lived and died in London, Ont. His family confirmed his death Wednesday at age 72.

Benner's art was part of the movement known as London Regionalism in the 1960s and '70s, challenging how the artist situates themselves in the art world and in the community.

"When I think of Tom's work, I think primarily of his love of nature and the environment," said Catherine Elliott Shaw, acting manager of the McIntosh Gallery at Western University and its former curator.

"He did an amazing series of art works that tried to focus people on the disappearing natural habitat, animals themselves, their place within our purview of life, but he was also interested in humour and he knew that if he could use that humour, he could reach people better. That's not to say his work wasn't serious, but he knew how to use humour to make people look at his work and take the message in as a person."

In London, Benner's White Rhino — an aluminum sculpture of a large rhinoceros — stands in front of Museum London.

About his art, he said: "Each piece is strongly rooted within a tradition of narrative and storytelling, but is also equally concerned with materiality. Some stories are grounded with historical research, scouring book stores and libraries for information, some stories come in the form of dreams, memories.

"My sculpture is not solely about the individual piece, but also about the process, the materials, and the space it occupies."

WATCH | Tom Benner explains his  exhibit at Charlottetown's Confederation Centre of the Arts 12 years ago: 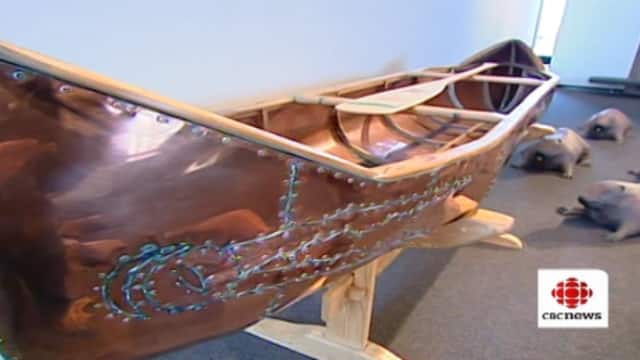 Call of the Wild

13 years ago
Duration 3:57
Artist Tom Benner has a new exhibit at Charlottetown's Confederation Centre of the Arts

Benner's work has been displayed across Canada, including at Union Station in Toronto and at Charlottetown's Confederation Centre of the Arts, where he created an iconic Moose that stands outside the building.

"He meant a lot to the culture of this region and to Canadian art in general," said Cassandra Getty, the curator of art at Museum London.

"He asserted his own unique voice and way of working that was immediately recognizable. He was very prescient in his work about idea of how humankind was threatening the environment."

On his website, Benner's biography notes he was living with his wife Pauline and brother-in-law.

His brother is the artist Ron Benner, also a London resident.

"I used to go over to their house in Grade 9, Grade 10, and they were very, very funny. Tom at the time was making these huge boulders out of fibreglass. We would lift them over our heads, sort of Fred Flinstone-type stuff, to show how strong we were. It was hilarious," Gibson recalled.

"He had humour but he was also very serious about his art."

Tom Benner was best known for his large sculptures made out of cold, rolled, riveted aluminum and copper. In the 1980s, he created a series of works that were about threatened or extinct species, including the white rhino.

"He had messages to get across that were quite serious, but he used humour to help get those messages across," Getty said.