Lobster with 4 claws to escape the dinner table

A four-clawed lobster that came with a shipment from Nova Scotia will never see the dinner table despite having double the usual amount of claw meat, the Maine wholesaler that acquired it says. 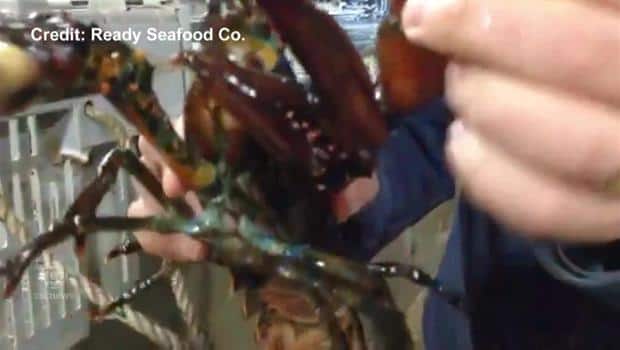 5 years ago
0:22
Ready Seafood Co. bought the lobster, which has four fully formed claws, from a Canadian dealer. 0:22

A Portland, Maine., seafood wholesaler has acquired a lobster that will never see the dinner table despite having double the usual amount of claw meat.

Ready Seafood Co. bought the lobster, which has four fully formed claws, from a Canadian dealer. The critter has three claws on one arm and one on the other. Lobsters normally have two claws — one for pinching and one for crushing.

Ready Seafood's in-house marine biologist Curt Brown on Thursday said he's never seen a four-clawed lobster in more than a decade in the business. He says a genetic mutation most likely caused the extra claws.

The crustacean will be handed over to the state Department of Marine Resources, Brown said. He said he'll suggest the agency try to breed it in captivity. A spokesman for the department said he hasn't heard anything about the creature yet.

Brown said the extra claws turned out to be a stroke of luck for the lobster, which is otherwise a sturdy hard-shelled lobster that likely would've made good eating.

"If this lobster had two normal claws, it would've ended up down Commercial Street or somewhere in Shanghai," he said.

Genetic defects sometimes cause lobsters to have different coloration than their typical brownish hue. The University of Maine has said blue lobsters are about a 1-in-2 million occurrence, and other colours are much rarer.

But Adam Baukus, a marine researcher with the Gulf of Maine Research Institute, said it's difficult to say exactly how uncommon it is to find a four-clawed lobster.

"There are all these traits that could have some weird genetic twist, and this is one that we rarely see," he said.

The lobster arrived at Ready Seafood on Sunday along with a shipment from Nova Scotia. Brown said it's a female lobster and was most likely caught off of Canada.

He said his wife has named the lobster "Clawdette."