Life in the Arctic: Where old ways and new collide

The search for the lost Franklin ships has brought attention to Cambridge Bay, a community in the heart of the North where old traditions and modern conveniences come face to face. 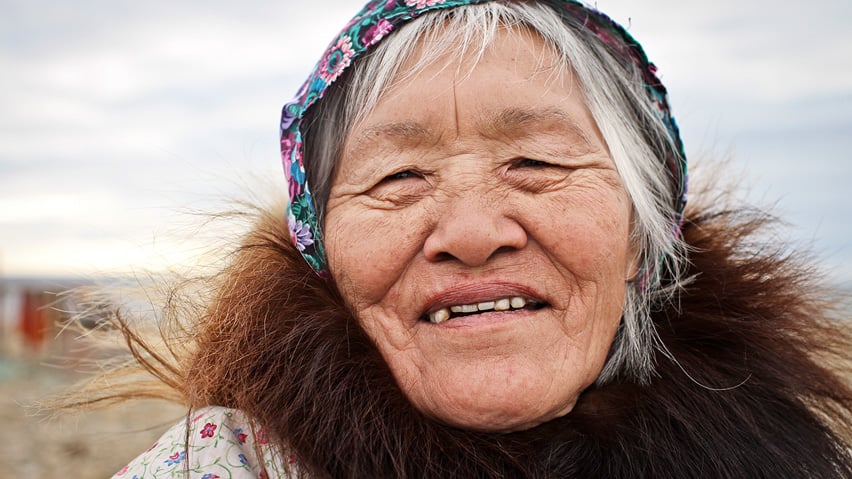 In the heart of Canada’s North, Cambridge Bay is a community caught at a crossroads. Both an economic hub and a bedroom community for the region’s active resource sector, the tiny Arctic hamlet is also home to a people steeped in a culture centuries old. Their language and traditions rooted in a nomadic past that some locals fear is giving way to the modern conveniences offered by life in town.

Situated roughly in the middle of the Northwest Passage on Victoria Island, Cambridge Bay is a go-to stop for Arctic-faring sea traffic and a central staging area for researchers taking advantage of a short summer weather window.

"We really only have a couple months to work up here", says Matt Debicki, the person in charge of logistics on the Martin Bergmann, a research ship taking part in the search for explorer Sir John Franklin’s lost ships.

The Bergmann wintered in Cambridge Bay, where its crew and Parks Canada-backed research team have been working to ready the ship for its mission.

"Planning is everything. For most things, you can’t just run to the store", Debicki says of working in the North.

Lay of the land

Cambridge Bay is located on the southern edge of Victoria Island, some 850 kilometres north of Yellowknife, an hour and 40 minute flight from the hamlet’s largest urban neighbour.

The High Arctic community has a year-round population between 1,500 and 1,700 people. By comparison, Iqaluit is home to about 6,700 people and Rankin Inlet on Hudson Bay has a population of about 2,300 based on census data collected last year.

The Canadian government announced Thursday that it is launching a search for the two ships involved in Sir John Franklin's doomed 1845 quest for the Northwest Passage, the very passage where tourists are now venturing.

For full coverage of the Franklin search, visit cbcnews.ca/franklin.

Known as Iqaluktuttiaq, meaning ‘good fishing place’ in Inuinnaqtun – the traditional language spoken in the region – the many lakes and rivers surrounding Cambridge Bay abound with Arctic char and trout, which remain a staple in the local diet.

The region’s waterways are home to one of the world’s largest populations of the salmon-like Arctic char, luring sport anglers from around the world who use the community as a launching point to access Nunavut’s many remote fishing lodges.

For those not in the mood to fish or hunt for dinner, there is a Co-op and a Northern store, where one can purchase anything from groceries to an all terrain vehicle (ATV), albeit at premium prices.  A two-litre carton of milk can cost $6, while the same quantity of orange juice will run over $12. Eggs average around $6 for a dozen of the large brown variety, and a 250 gram box of oatmeal cookies is $14 – prices as high as double what one might expect at a trendy southern Canadian supermarket.

While the staples are available, Cambridge Bay lacks some of the comforts taken for granted down south.

"There is no hairdresser," for one, says Rebecca Verlinden, the manager of one of Cambridge Bay’s two hotels. "There is a real lack of amenities."

It's a reality Verlinden says came as a shock when she first made the move north nearly two years ago. Verlinden quit her job in Nova Scotia to take a contract managing the 25-room Arctic Island Lodge.

"I came for the adventure … and the money. The money is huge." Verlinden says she makes nearly twice as much as she did at her previous job managing a truck transportation company – a deal made sweeter with Northern Residents Deductions – a tax measure meant to offset the high cost of living in the North.

"Hunting, fishing and boating, those are my hobbies," says George Hakongak. The 49-year-old Cambridge Bay local is of a generation that remembers spending childhood winters in an igloo and still spends as much time out on the land as he can.

I want to live somewhere else. I love the North, but I can't stay here.

His teenage daughter, Nuka, shares her father’s passion for the outdoors, but is yet to learn to gut a fish – a task she leaves to her dad. She prefers to spend her nights – such as they are in the land of the midnight sun – watching movies or hanging out at her friend’s house.

With high-speed internet and satellite TV, people in Cambridge Bay don't seem to mind the lack of a movie theatre or bookstore.

The long and ever-looming winter seems to imbue the locals with an urgency to get while the getting is good, while the nearly perpetual daylight in summer will find kids playing outdoor basketball, riding their bikes or fishing from the pier at all times of the day or night.

Growing up in the North

Cambridge Bay has one of the youngest populations in Canada, with a median age of 24 years, significantly lower than the national average of 40.

"People tend to stay close to home," says 18-year-old Nuka Hakongak, who grew up in Cambridge Bay. "Some venture out to go to school, but I know a lot of home-bodies, people who will stay in Cambridge."

Hakongak left to complete Grade 12 in Edmonton, her mother’s hometown. "I wanted a more academic challenge," she said.

"I want to live somewhere else. I love the North, but I can't stay here."

Cambridge Bay has a high school and a Nunavut Arctic College campus, but Hakongak says the larger class sizes and a more diverse range of experiences offered in the city drew her south.

The crash of a First Air passenger plane last year – the same that claimed the life of renowned Arctic researcher Martin Bergmann – has led the teenager to reconsider becoming a pilot.

"I still want to work in aviation", says Hakongak, who plans to study aircraft maintenance in Alberta starting this fall.

Evidence of habitation in the Kitikmeot Region where Cambridge Bay is situated goes back as far as 2000 B.C. (about 4,000 years), to the pre-Dorset people. Little is known about those early Arctic inhabitants, but their heirs, the Dorset are known in Inuit legend as ‘the first inhabitants’ and may have been the first North Americans encountered by Vikings in the 11th century.

The ruins of a Dorset longhouse can be seen a short drive from Cambridge Bay, while a number of Thule homes and stone food caches remain. The culture of the Thule – the ancestors of the contemporary Inuit – dates back about 1,000 years.

Cambridge Bay became the site of an RCMP and a Hudson’s Bay outpost in 1921, earning some early notoriety when the Maud, the ship once belonging to famed Norwegian explorer Roald Amundson and sold to the RCMP in 1926, sank. The wreck of the Maud still sits just outside town, although a Norwegian plan to repatriate her may see the wreck moved.

The Cold War left an indelible mark on the North with the construction of the Distance Early Warning (DEW) Line in 1955. The joint Canadian-U.S. string of radar stations stretching along the North coast from Iceland to Alaska saw one of the largest manned stations built in Cambridge Bay – strategically situated in the middle of the Arctic.

"The community changed everything," says Renee Krucas, director of the Kitikmeot Heritage Society.

"People went from living nomadic lives to shopping at the Co-op."

Hundreds of Inuit were hired to build and work at the DEW Line station, which is now known as CAM-MAIN – part of the North Warning System – and many stayed.

Cambridge Bay will also be home to the High Arctic Research Station as part of the Harper government’s Northern Strategy, its central-Arctic location serving strategic as well as scientific purposes. Construction is scheduled to be completed in 2017.

Once widespread in the Kitikmeot region, Inuinnaqtun is now only spoken in four communities. Cambridge Bay and Kugluktuk, a day apart by boat across the Northwest Passage, serve as the centres of Copper Inuit culture along with the summer camps of Bay Chimo and Bathurst Inlet.

Named by western visitors for their use of copper gathered from the hills around Kugluktuk, the Copper Inuit maintain some distinctions from the greater, Inuktitut-speaking Inuit population dominant throughout the Northwest Territories and Nunavut.

"Their language is tied to every aspect of their culture. It's more than communication, it represents where they come from. It’s so much more than a language," says Krucas.

"They are some of the friendliest people I’ve ever met," a trait Kurcas partially attributes to the fact the language is precipitously close to being lost.

"They welcomed visitors and adopted many Western practices, including the language," says Krucas.

Through the work of her group, the Kitikmeot Heritage Society, Krucas and a team of elders living in Cambridge Bay are working to preserve the language and traditional ways of life.