More than 200 Canadian lawyers who were disciplined between 2010 and 2015 misappropriated about $160 million of their clients’ funds, a CBC News investigation has found.

More than 200 Canadian lawyers who were disciplined by their law societies between 2010 and 2015 misappropriated about $160 million of their clients' funds, a CBC News investigation has found.

But most of those lawyers were never charged with crimes. CBC could find evidence of criminal prosecutions involving fewer than 10 per cent of the total number of disciplined lawyers in that time frame.

An analysis of public records over six years shows law societies sanctioned 220 members for taking or mishandling money from clients or overcharging them, either negligently or intentionally.​

Lawyers were punished for a variety of infractions, including helping themselves to clients' trust funds, keeping money that belonged to a deceased client's estate, mishandling of client funds, charging for services not provided and charging fees that were so unreasonable that they constituted misconduct.

While some lawyers argued they were not guilty of deliberately doing anything wrong, many others admitted to misappropriation. Some said they lied to regulators when clients complained or when they were caught in spot audits.

Penalties ranged from admonitions and fines to suspensions and disbarments. In some cases, law societies allowed lawyers facing disciplinary charges to resign.

Bette Hawley of Ottawa hired lawyer Luc Barrick in 2010 and paid him a retainer to help with a housing problem. Barrick was later found by the Law Society of Upper Canada to have "misappropriated and/or misapplied" about $360,000 from his clients.

The Law Society determined he had misappropriated $650 from Hawley.

"Any misappropriation of in-trust money should be treated as a criminal offence. It's stealing money," said Hawley.

Barrick left Canada in 2011 for France and was disbarred in October 2013.

He told the CBC he left Canada for health reasons and all accusations that he improperly used trust funds are unfounded. He says he intends to return to Canada one day to try to overturn his disbarment.

Criminal convictions are rarely a consequence for lawyers who take clients' money. CBC's investigation could only identify 19 examples of criminal prosecutions between 2010 and 2015. Six of the prosecutions involved lawyers who were disciplined prior to 2010.

One reason for the small number of charges or convictions may be the higher burden of proof required in criminal cases.

In 2015, an Ontario Superior Court judge acquitted a disbarred lawyer of fraud, saying that bad work by a lawyer doesn't necessarily constitute fraud.

"It becomes very daunting for investigators to even think about investigating, let alone think about facing a potential prosecution, so often what happens is they simply rely on regulation to solve the problem for them," he said.

"In other words, if they've been dealt with by the law society, political masters and police managers will feel that will suffice and that there's no need to pursue a criminal prosecution."

The CBC investigation found Ontario and Quebec had the highest number of disciplined lawyers, but the types of punishment meted out were different.

In Ontario, 71 lawyers were disciplined for taking money from their clients between 2010 and 2015. Seventeen lawyers were suspended and 49 were disbarred for their misconduct. Others still await punishment.

CBC News calculated that the median duration of each temporary disbarment handed out in Quebec was 12 months.

The Law Society of Manitoba has referred 10 cases involving lawyers it disciplined to the police since 2010. None of those lawyers faced criminal charges.

"In every instance where a lawyer is convicted of misappropriating client funds there would be a report made to the authorities," Law Society of Manitoba spokesperson Kris Dangerfield said in an email.

"We do not receive confirmation from the authorities confirming whether in fact they have chosen to commence an investigation into the lawyer's conduct."

'Too easy to steal'

Alice Woolley, president of the Canadian Association for Legal Ethics who teaches at the University of Calgary, says no matter how harsh a punishment is, the lawyer will think he's the one who won't get caught.

"If you make it easy for people to cheat, they cheat. If you make it hard, they don't cheat. If people are stealing money that means it's too easy to steal money," she said in an interview.

Woolley says the best way to bring the numbers down is by stopping the lawyers before the money is taken.

"You want to make it so if I have a problem today, I can't fix it this way."

"We basically asked the question, does what we do as a legal regulator make any difference?" he said.

"And when we answered it 'Not really,' it was a pretty profound conclusion for us to come to.

Pink says there are usually symptoms such as poor accounting and accounting mistakes. If the lawyer keeps getting away with it, that can eventually lead to missing money.

He is working to get provincial legislation changed so that the law society can regulate law firms and address these accounting problems before they escalate.

Woolley says change can be difficult in a profession that is self-regulated.

"The problem with self-regulation is that it stops innovation, it stops people from making the changes that need to be made because they're afraid of what it might mean for the profession." 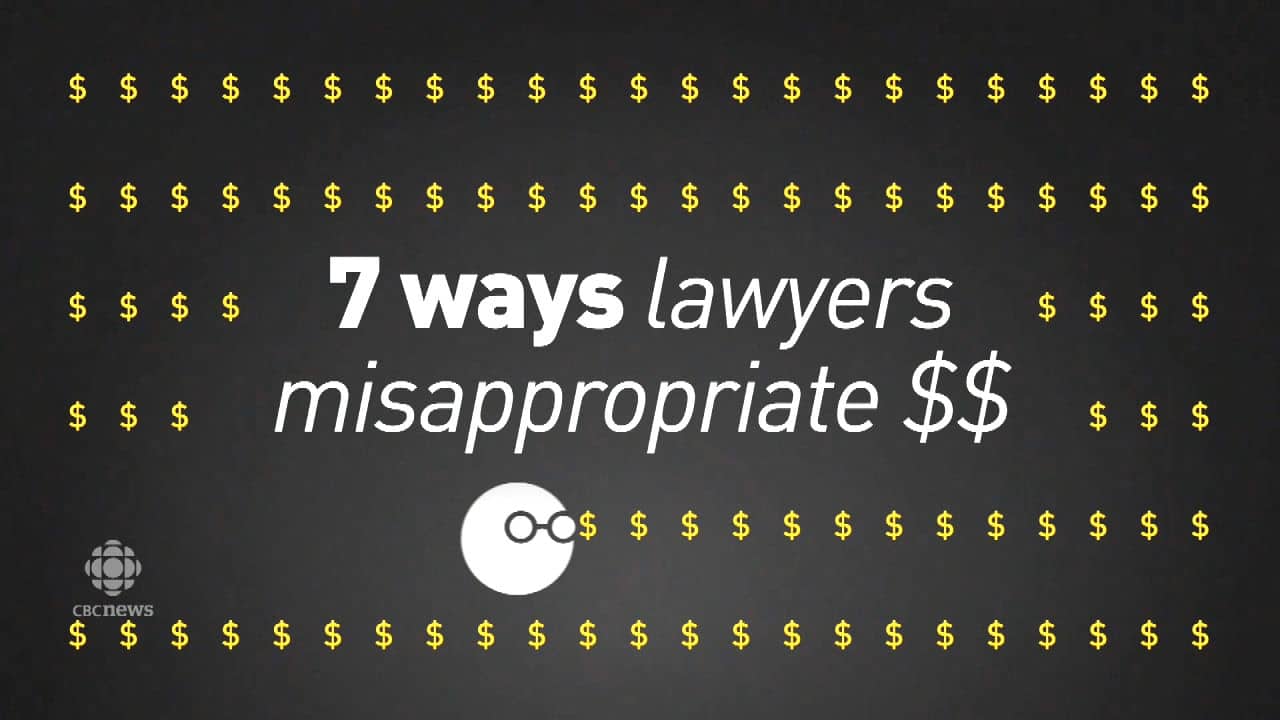 4 years ago
1:17
More than 200 Canadian lawyers who were disciplined by their law societies between 2010 and 2015 misappropriated about $160 million of their clients' funds, a CBC News investigation has found. 1:17

A note on methodology: CBC News compiled information about discipline cases and prosecutions between Jan. 1, 2010, and Dec. 31, 2015, by collecting material from provincial law societies, legal and court databases and media reports. We included all instances in which lawyers were sanctioned by their law societies for improperly taking or mishandling money from client trust funds or overcharging clients to an extent that led to professional misconduct. This includes deliberately overcharging, charging for services never provided, outright fraud and breaching law society rules respecting client funds. Because there is no single comprehensive source for this information, it is possible not all relevant cases of discipline and criminal prosecution were captured. In about 30 discipline cases, it was not possible to provide an estimate of the amount of money clients may have lost.

With files from Joseph Loiero and CBC Reference Library