Knowlton Nash, longtime anchor of CBC's The National, dead at 86

Knowlton Nash, a decorated Canadian journalist who went from selling newspapers as a boy in Toronto to serving a decade as anchor of CBC's The National, has died at age 86.

Toronto-born Nash was one of Canada's top journalists 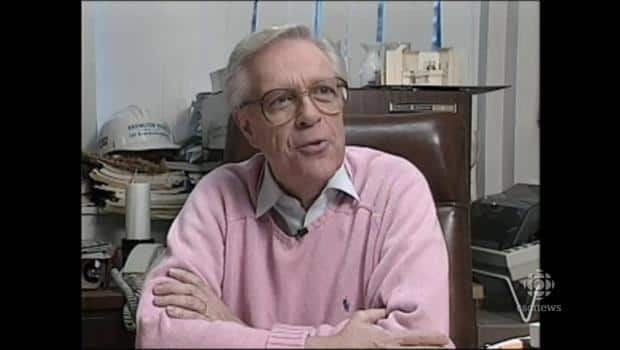 7 years agoVideo
3:04
Knowlton Nash, a decorated Canadian journalist who went from selling newspapers as a boy in Toronto to serving a decade as anchor of CBC's The National, has died at age 86. 3:04

Knowlton Nash, a decorated Canadian journalist who went from selling newspapers as a boy in Toronto to serving a decade as anchor of CBC's The National, has died at age 86.

Born Cyril Knowlton Nash in Toronto in 1927, it didn't take him long to find his calling. At eight years old, he put together his own newspaper. At 10, he operated his own newsstand. Later, during his first big journalism job as night editor with the British United Press, a Toronto-based wire service, he wrote an estimated 4,000 articles.

"Journalism has been the love of my life," Nash told The Canadian Press in 2006.

Journalism loved him back.

Shortly after taking a job in Washington with the International Federation of Agricultural Producers — during which he moonlighted as a freelance writer filing stories for a range of Canadian publications — Nash landed a job as Washington correspondent for CBC's Newsmagazine. The high-profile role and his legendary work ethic thrust him into the spotlight.

During the post, he tracked down Cuban revolutionary Che Guevara for an exclusive interview. He was one of the last reporters to interview Robert F. Kennedy before the New York senator's assassination in 1968. Nash also dodged gunfire in the Dominican Republic as U.S. forces fought with rebels, something he later had some fun with on the program Front Page Challenge.

"I don't put myself first. I put work first," Nash said, during a CBC Life and Times documentary released in 2001.

In Washington, Nash went on to cover the Cuban missile crisis, space launches at Cape Canaveral and the riots surrounding the 1968 Democratic National Convention in Chicago. But in 1969, he took a management role at the CBC, a career move that surprised many of his colleagues.

It didn't go well. In 1970, just one year after Nash had begun his new role, then Prime Minister Pierre Trudeau blasted the CBC for its coverage of the October Crisis, calling it a propaganda vehicle for the FLQ. Nash reacted by sending a directive to limit coverage of the crisis.

Nash later owned up to the error, saying: "It was my fault. We went too far — farther than we should have."

Nash's management work did, however, give him a rare understanding of the CBC's history and culture, something he would write about in several well-received books, including The Microphone Wars: A History of Triumph and Betrayal at the CBC and Cue The Elephant!  Backstage Tales at the CBC.

Birth of an anchor

In 1978, Nash returned to the screen as chief correspondent and anchor at The National.

His return upset some, but Nash's steady presence won over. While critics said he had an unemotional delivery, he was beloved by Canadian audiences.

As the face of The National, Nash covered all the major stories, from the collapse of Joe Clark's government to the 1980 Quebec referendum on the sovereignty question, and Trudeau's 1984 "walk in the snow" resignation.

Nash's look also left an impression on TV viewers — wearing thick-rimmed glasses and in bold attire such as a pink shirt under a suit jacket — although management eventually forced him to give up the colour, according to CBC archives.

On screen, Nash's voice was engaging and amiable, but he believed in a straight-faced style of news presentation so as to not distort a story.

"It's inconceivable to him to actually contaminate a report with his own view. I think he'd probably blow up if he tried," said longtime CBC producer Mark Starowicz.

Nash officially retired from CBC News after hosting The National on Nov. 28, 1992, handing over the reins to Peter Mansbridge, with whom he had been sharing hosting duties since 1988.

Defender of the CBC

Nash hosted several more programs at the CBC after his retirement, and continued to have a close connection to the public broadcaster.

After dramatic cuts to the CBC's budget in 1996, Nash spoke out in an interview with TVO.

"These cuts are really into the bone … it's fundamentally hurting the whole concept of public broadcasting," he told host Steve Paikin.

"People are thinking about money and jobs and the future rather than what they should be doing: thinking creatively about how we can create a better program."

In 2006, Nash criticized the CBC for choosing to push back The National so it could air a popular ABC reality show in the 10 p.m. ET slot.

Nash was named an officer of the Order of Canada in 1989, became a member of the Order of Ontario in 1998, and was given honorary degrees from several Canadian universities, including the University of Toronto.

He is a member of the Canadian News Hall of Fame, and was given the President's Award of the Radio and Television News Directors' Association in 1990.

Along with his books on the CBC, Nash also wrote his memoir, History on the Run, about his time as a foreign correspondent, as well as history books like Kennedy and Diefenbaker: The Feud that Helped Topple a Government.

In 2002, Nash was diagnosed with Parkinson's disease. "There are a lot worse things that could be happening to you … with Parkinson's, you just have to cope with it and get on with it," Nash told the Hill Times in 2010.

Nash split time between Florida and Toronto during his retirement, alongside his wife of four decades, Lorraine Thomson, who also worked as a host with the CBC.