Terrified of ticks? There's lots you can do to protect yourself, Guelph expert says

Headlines and social media posts about ticks that can cause red meat allergies or that have spread far and wide in just two years may have you feeling nervous about what you might encounter on your next hike. Katie Clow from the Ontario Veterinary College offers a reality check.

Just the word can conjure up images of a small thing engorged with blood, making you cringe and feel itchy.

But Katie Clow says there's no need to fear the blood-sucking arachnids.

"Some people will say, 'Well, now I'm afraid to go outside,'" she said.

"That's not the message that we want to take home. We'd rather empower you to take preventative measures as much as you can so that you can still enjoy the great outdoors, and go for a walk with your pet and just know how to protect yourself."

Clow is an assistant professor in the department of population medicine at the Ontario Veterinary College at the University of Guelph.

She says ticks have been creeping and crawling — or hitching a ride — to new places and making themselves at home as the climate changes.

"In the spring, ticks are great at hopping on a migratory bird, they take a blood meal, and then four to seven days later, they end up somewhere completely new," Clow said.

There are 800 tick species around the world. About 40 call Canada home, although we may not notice most of them because they aren't interested in feeding on us or our pets.

But more ticks could be making their way here.

In particular, researchers are keeping an eye on the lone star tick and the Asian longhorned tick.

The lone star has made headlines because it can cause a rash, headache, muscle pain, and, the U.S. Centers for Disease Control and Prevention (CDC) says on its website, "allergic reactions associated with consumption of red meat have been reported among persons bitten by lone star ticks."

The tick has quickly spread across the U.S. to areas near the Canadian border and there have been reports of it entering the country.

Clow says there's no evidence yet that there's an established population in Canada, but notes the climate could support the survival of the ticks.

Watch: CBC's The National took a look at the lone star tick. 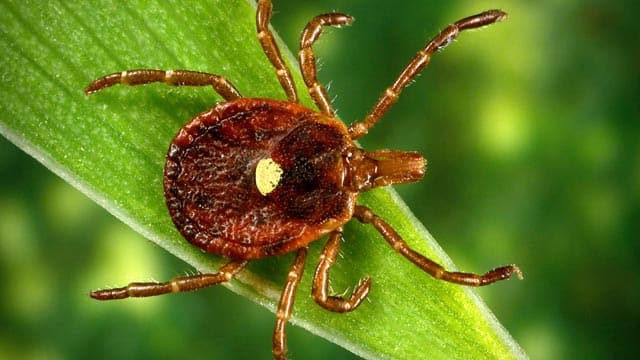 4 years agoVideo
1:52
Allergic attacks are hard to detect because symptoms don't show up right away 1:52

The Asian longhorned tick is an interesting case because scientists and researchers don't really understand how it made its way to North America, Clow said.

They are invasive in Australia and New Zealand, but were first reported in the U.S. in 2017.

Since then, the ticks have spread quickly and as far north as New Jersey, Pennsylvania and New York, but so far, not north of the border. The CDC notes female ticks can lay eggs and reproduce without mating and thousands of ticks can be found at a time on an animal.

A bite can make people and animals seriously ill, although as of May 28, 2019, the CDC noted "no harmful germs" have been found in ticks collected in the U.S.

"We are actively monitoring any tick submissions that would potentially allude us that this tick has been introduced," Clow said.

"Right now we have no evidence that it's been detected in Canada at all but because it has expanded so rapidly across the United States, it's certainly a concern."

How to prevent tick bites

Clow's research interest is on the black-legged tick, the one that can spread Lyme disease. Health Canada says you know you've been bitten by an infected tick if you develop a rash, sometimes shaped like a bull's eye, or if you have a fever, fatigue, muscle or joint aches or swollen lymph nodes.

In all cases of ticks, Clow says people can take simple steps to stay safe and prevent tick bites.

The tips are ones you've likely heard before: stay on marked trails, cover up as much as possible, wear light coloured pants, you can even tuck your pants into your socks, and use DEET, although she notes DEET isn't 100 per cent foolproof.

For dogs, there are tick preventatives, like medication or patches, which will kill a tick once it starts feeding.

"When you come back inside, doing a really good tick check on yourself and your pets is sort of the biggest take home message because then if you do find a tick, you can remove it quickly before it's had time to feed very long and transmit anything," she said.