Thalmic Labs of Kitchener, Ont., has begun shipping pre-orders of its Myo armband, a device that allows people to control computers and other devices with arm movements.

Applications for the Myo armband include use in medical settings, and for wireless computing and gaming 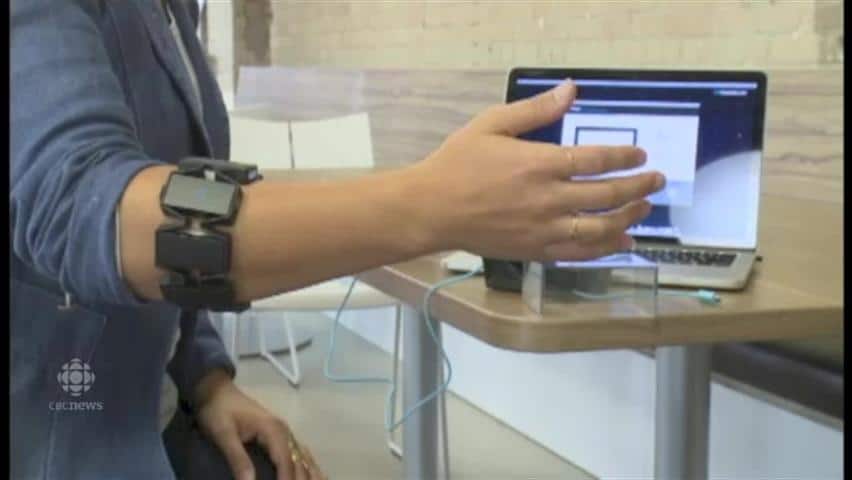 Thalmic Labs, a startup based in Kitchener, Ont., is shipping pre-orders of its highly anticipated Myo armband, the latest innovation in the burgeoning field of wearable tech.

The device allows users to control and manipulate computers, video games, smartphones, robotic devices, drones and other technology with arm gestures and movements. The company says Myo uses a new type of biosensor, which can pick up electrical impulses in a person's arm muscles.

Aaron Grant, one of the co-founders of Thalmic Labs, says over 40,000 pre-orders for the armbands have been placed. Each armband costs $149.

Grant says developers who placed pre-orders will get their armbands first, followed by a release for the general public in September. A number of developers have already had a chance to experiment with the Myo in order to find new ways to make use of it, he said.

One of the things that has hung over the head of the industry is the  Minority Report -type interface, from the Tom Cruise movie.- Darrell Etherington, staff writer at TechCrunch

"It's been kind of overwhelming the number of different ideas we've heard and the things people have already built," Grant told CBC News.

"We've seen applications in medical settings, surgeons using it to navigate through diagnostic imagery when they're in the operating room, we've seen lots of things in gaming."

Darrell Etherington, a staff writer with TechCrunch, has tried the device. He says the buzz around the Myo leading up to its launch has been positive among technology journalists.

"One of the things that has hung over the head of the industry is the Minority Report-type interface, from the Tom Cruise movie," said Etherington. "People really want to be able to make that a reality, where you can interact with your computing devices in a really immersive way."

But Etherington says the main challenge for Thalmic Labs as a new company is to use the hype to create a regular and profitable business stream.

"Samsung can release a product like their smartwatches, which haven't been selling well, and they don't care because they have plenty of room to burn," said Etherington.

"But with something like the Myo, it really has to do well in its first iteration if we want to see it stick around.

Etherington adds there is an extra layer of risk for Thalmic Labs, since the majority of its operations from design to logistics are done in-house and not outsourced.

"It must be a massively expensive undertaking to do what they've done," he said.