A sprinkler system could have made a big difference at the fire-ravaged main building at the St. Jacobs Farmers' Market north of Waterloo, Ont., according to Woolwich Fire Department Chief Rick Pedersen. The building was destroyed by a fire early Monday morning. 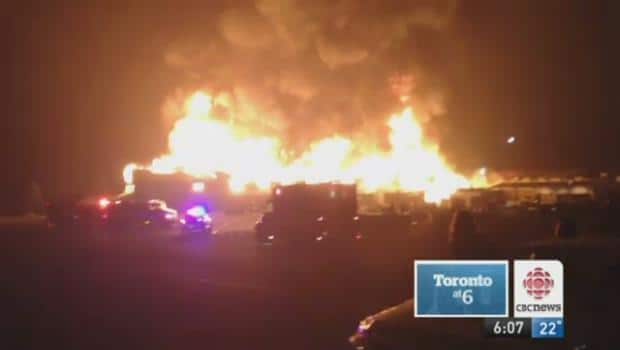 A sprinkler system could have made a big difference at the fire-ravaged main building at the St. Jacobs Farmers' Market north of Waterloo, Ont., according to Woolwich Fire Department Chief Rick Pedersen.

The building was destroyed by a fire early Monday morning.

"It’s older construction, heavy timber, which would [require a sprinkler system] if it was built to today’s code. But back then it wasn’t required," said Pedersen of the building, which he estimated at 24,000 square feet and described it as "combustible."

Pedersen said a sprinkler system could have saved the building or minimized the damage.

Pedersen made the remark at a news conference at noon on Monday as he briefed media on the latest on the fire that destroyed the popular southern Ontario tourist destination and local landmark.

Damage from the fire could be as high as $2 million, according to Pedersen.

Martin said that the fire department received a call around 1:48 a.m. ET regarding a fire at the market.

"On arrival, the farmers' market building — the main building — was totally involved in fire, coming out through the roof. At that point we concentrated on the other buildings around here, where the livestock sales happen," said Martin.

No one was hurt in the fire, said Martin.

The office of the Ontario Fire Marshal is now investigating the cause of the blaze.

Forty-five firefighters from four different stations battled the fire, according to Pedersen. The blaze was under control by around 6 a.m.

There did not appear to be any major damage to surrounding buildings, he said.

Woolwich Mayor Todd Cowan said the loss of the St.Jacobs building is devastating.

"The biggest word is shock — shock and devastation for the area. But you know this a community that is used to barn raising and rebuilding and I think that the community is already starting to come together," he said.

Dawn McClure and Jim Bowie of Elora were among hundreds of people who flocked to the scene as fire crews tended to the remnants of the blaze.

"I feel sorry for them, Bowie said through tears referring to the vendors who lost everything in the fire.

"You're in our prayers," said McClure. "This is probably the worst time of year for that to happen.

"It's going to put a few of [the vendors] out of business," she said.

Cowan said around 60 vendors have been affected by the fire, and the township plans to do anything it can to help rebuild the market.

"We're going to help fast-track the building site plans and the building permits and whatever we can do to help," he said.

The cause of the fire has yet to be determined.

"We’ve been going to the market as long as it’s been established. Sometimes it’s more of a social outing than a purchase day, but we quite enjoy the market and the produce they have and the people we meet there," he said.

However, he said the region was not planning to offer financial assistance.

"There are a number of vendors and they certainly will be impacted, but a lot of these people operate out of their farms or other locations, so in terms of the market, it will be a loss of opportunity, but I think that we’ll see the outdoors vendors will carry on and the indoor vendors will find other opportunities for business."

Sheila Shantz, the manager of the market, said she would like it to be open "as soon as possible" but must wait to talk to the fire department and the fire marshal, before determining if it can open Thursday.

St. Jacobs market is open Tuesdays during the summer, and from 7 a.m. to 3:30 p.m. on Thursday and Saturdays all year round.

"Right now we are very concerned for our vendors and just worried about getting them back and working again," said Shantz.

"Speaking with the vendors out here this morning we’re all prepared to take that walk, and do the building that we need to do," she said.