BlackBerry opened an autonomous driving research centre Monday, as it tries to make itself an indispensable under-the-hood piece of the automotive industry's weaponry in the self-driving vehicle arms race.

'They could absolutely dominate the market' for autonomous vehicle operating systems 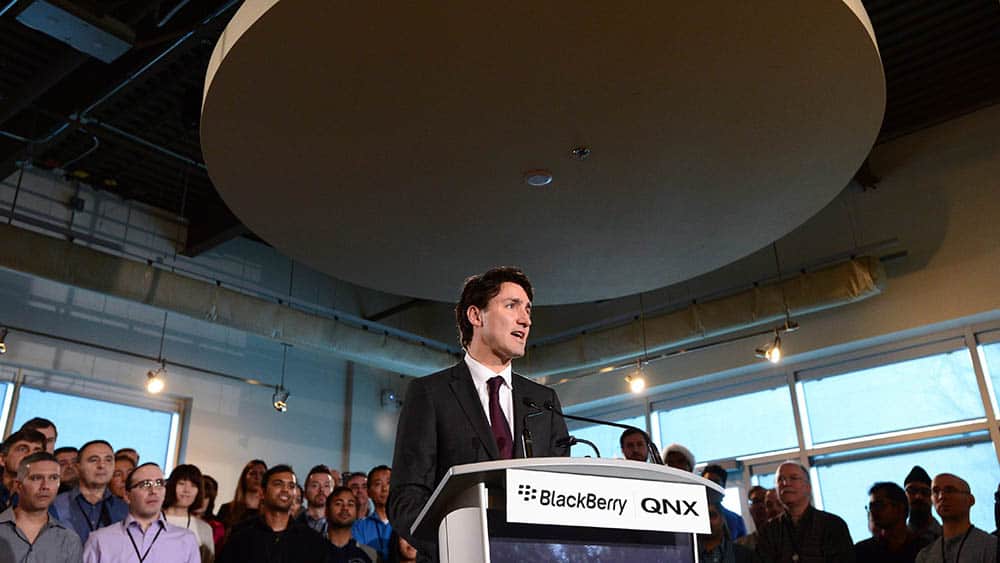 "Our innovation track record in mobile security and our demonstrated leadership in automotive software make us ideally suited to dominate the market for embedded intelligence in the cars of the future."

"With the opening of its innovation centre in Ottawa, BlackBerry is helping to establish our country as the global leader in software and security for connected car and autonomous vehicle development," Trudeau said.

"This centre will create great middle-class jobs for Canadians, new opportunities for recent university graduates, and further position Canada as a global hub for innovation."

Betting on future of autonomous vehicles

The move by BlackBerry Ltd (BB.TO) to open the autonomous driving research center is a way for the company to make itself an indispensable under-the-hood piece of the automotive industry's weaponry in the self-driving vehicle arms race.

BlackBerry — once known for its phones but now betting its future on the more profitable business of making software and managing mobile devices after largely ceding the smartphone market to the likes of Apple and Samsung — is expanding subsidiary QNX's Ottawa facility to focus on developing advanced driver assistance and autonomous vehicle technology.

If they can prove that they have the whole package and the security, they could absolutely dominate the market.- Sam Fiorani, an analyst at Auto Forecast Solutions

After a detour where QNX's industrial-focused software was used to reinvent the now-discarded BlackBerry phone operating system, BlackBerry is focused on how its embedded software interacts with the explosion of sensors, cameras and other components required for a car to drive itself.

BlackBerry said it plans to recruit and hire local software engineers to work on ongoing and emerging engineering projects for connected and autonomous cars.

The company recently received approvals from the Ontario Ministry of Transportation to test autonomous vehicles on Ontario roads as part of a pilot program.

The company will also be working with University of Waterloo, PolySync, and Renesas Electronics to build an autonomous concept vehicle.

But while deep-pocketed Silicon Valley has invested heavily in the artificial intelligence and machine learning required for autonomy, more financially-constrained BlackBerry has not, eyeing instead a niche role as a trusty sidekick.

"What QNX is doing is providing the infrastructure that allows you to build higher-level algorithms and to also acquire data from the sensors in a reliable manner," said Sebastian Fischmeister, a University of Waterloo associate professor who has worked with QNX since 2009.

"Our play in this is that we provide the software foundation for these high-performance compute platforms," QNX head John Wall said in an interview on Friday .

BlackBerry and the university's research teams got the green light to test Ford Motor Co (F.N) Lincoln vehicles with autonomous features on Ontario's public roads late last month. The company has also inked a deal to work directly with the Detroit-based carmaker as it works to get fleets of robot ride-sharing vehicles to market by 2021.

'Could absolutely dominate the market'

Wall said the company is in advanced discussions with "more than one or two" other major global automakers about similar partnerships, but also cautioned that the hype of robot cars would take a long time to be fully realized.

'BlackBerry is helping to establish our country as the global leader in software and security for connected car and autonomous vehicle development.'- Prime Minister Justin Trudeau

"If they can prove that they have the whole package and the security, they could absolutely dominate the market" for autonomous vehicle operating systems, said Sam Fiorani, an analyst at Auto Forecast Solutions.

Risks remain, including the challenge from chipmakers such as Intel who, eyeing demand for their processors in future robot cars, could discount or give away their own security and safety software in order to sell more hardware.

"Some of these companies can afford to lose a lot of money in their pursuit of adoption and market share," said Chris Rommel, who leads embedded technology research at VDC Research.

Daniel Bader, a technology analyst with Mobile Nations, thinks BlackBerry has what it takes to dominate the industry.

Ahead of the curve

"They have probably the best shot at making a long-term difference out of any of the companies right now, including Apple, Google and Tesla, only because they're already in millions and billions of cars, and they have so many existing relationships with the Big Three Detroit automotive companies like Ford and GM and Chrysler," he said.

"The companies that have gone with competitors have regretted it and have actually moved over to QNX as a result, so BlackBerry's benefitted greatly from being in the game early and having extremely positive reception from the manufacturers themselves."

Right now, QNX is not a huge part of their revenue stream, Bader said, but the industry is set to take form over the next five to 10 years, and BlackBerry is ahead of the curve.

"BlackBerry's got so much mastery of this already with QNX — it's already five or 10 years ahead of the competition," Bader said, noting the company is moving away from smartphones to position itself as a software company.

"Even though we'll see the BlackBerry brand continue to exist on phones, that story is going to be less and less important to the company's bottom line in 2017 and beyond," he said.