“Tonight is the end of one chapter for me and the beginning of another, for Guelph, for the Green Party, for Ontario,” Schreiner told supporters during his victory speech Thursday night. “I’m ready to take my seat at Queen’s Park.”

'Tonight is the end of one chapter for me and the beginning of another': Schreiner 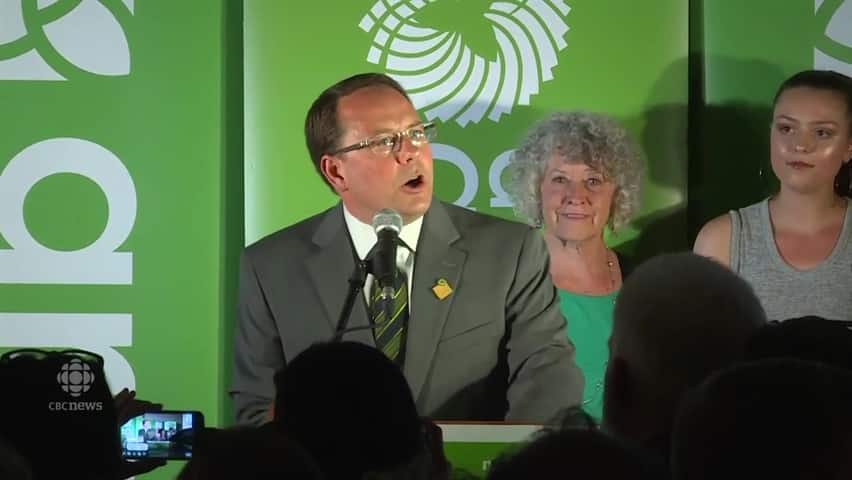 Green Party Leader Mike Schreiner has made Ontario history by winning a seat in Guelph.

"Tonight is the end of one chapter for me and the beginning of another, for Guelph, for the Green Party, for Ontario," Schreiner told supporters during his victory speech Thursday night. "I'm ready to take my seat at Queen's Park."

Schreiner told cheering supporters he got into politics to leave a livable future for his children.

"I commit to you that I will work hard for you. I will work hard to make sure that we protect the people and places we love in this province," he said. "Over the last nine years, I've learned so much about this great province and this city, this party and probably most of all I've learned a lot about myself. We are blessed. We are so blessed to live in Guelph and to live in Ontario."

He also thanked former premier Kathleen Wynne for a supportive ear over the years.

"I've had the opportunity to talk about a lot of what I've accomplished before having a seat at Queens Park, and it's partly because premier Wynne listened when I came to her with ideas about how we could make Ontario better and acted on some of those ideas and I want to thank her for that," he said.

With all 80 polls reporting in Guelph, Schreiner took about 45 per cent of the vote.

Voter turnout in the riding was about 63 per cent.

There is no incumbent in Guelph because former Liberal MPP Liz Sandals, who most recently served as Treasury Board President until January of this year, opted not to run in this election. She said she was ready to become "a full-time grandmother."

Sandals has held the seat since 2003.

Sly Castaldi ran as the Liberal candidate, replacing Sandals. She is known in the community for her work as the executive director of Guelph-Wellington Women in Crisis.

Agnieszka Mlynarz made an impact on voters during all candidates debates, representing the NDP. She recently earned her masters of arts at University of Guelph and did advocacy work as a student.

The Progressive Conservatives caused a bit of a stir when the party named former city councillor Ray Ferraro the candidate in Guelph. Ferraro was called out on social media for not attending all of the candidate debates. He spoke out against media reports that said he didn't support PC Leader Doug Ford.

Schreiner has led the Green party in Ontario since 2009.

Other candidates in Guelph included Juanita Burnett of the Communist party, Ontario Party candidate Thomas Mooney, Libertarian Michael Riehl and Paul Taylor of the None of the Above Direct Democracy Party.