A new poll commissioned by the Council of Canadians found 68 per cent answered “yes” when asked if the provincial government should force Nestlé to sell the Middlebrook well in Elora to the Township of Centre Wellington. 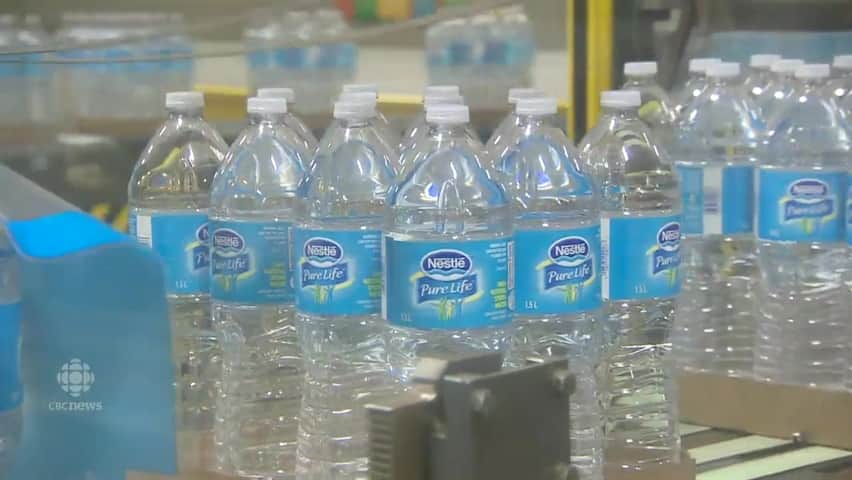 4 years ago
2:32
Nestlé Waters Canada may not be stealing public water, as some of its more hostile critics claim, but as Colin Butler writes, it is getting away with what some call a steal of a deal when it comes to an essential resource. 2:32

Nestlé Waters Canada should sell a well they purchased this summer in Elora, Ont., to the local municipality, a poll by the social action group Council of Canadians has found.

Of the 1,200 Ontarians contacted by phone earlier this month by the polling and market research company Oraclepoll, 68 per cent answered "yes" when asked, "Should the provincial government of Ontario require Nestle to sell the Elora well to the township?"

The Elora well is a "crisis point at the moment in Ontario as far as bottled water permits are concerned," Mark Calzavara, the Ontario-Quebec regional organizer for the Council of Canadians, told CBC News.

"It is the most important, or clearest contest, between a municipality and a bottled water company."

Nestlé placed a conditional offer on the Elora property, known as the Middlebrook well, in 2014 after the property had been for sale for about eight years.

The company was waiting for the Ministry of the Environment and Climate Change to approve a pump test for the well – something Nestlé is still waiting on.

In August, Nestlé announced it had purchased the Middlebrook well after an anonymous second buyer put in a no-conditions offer. Nestlé waived all its conditions to buy the property, then later learned the second buyer was the Township of Centre Wellington.

Township of Centre Wellington Mayor Kelly Linton told CBC News in August the township was not in a financial position to purchase the well previously, but an unexpected donation from the local Jack R. MacDonald Trust made it possible for the township to make a bid. The township didn't disclose how much it received from the trust.

Linton has said his township is in "heavy growth mode" and buying the well would have secured the future water needs of the community.

Since August, Nestlé and the township have been having discussions, although details of those meetings have not been made public.

"The minute we found out the township was the anonymous bidder, we immediately started thinking of ways that we could partner," Simard told CBC on Thursday.

"It will be something specific to Centre Wellington and to ensure that their community water supply needs are met first," Simard said.

We just can't see an acceptable solution coming out of that that involves Nestlé getting water out of that aquifer.- Mark Calzavara with the Council of Canadians

Linton said he could not comment on a partnership until the council had a chance to meet again to discuss it.

Mike Nagy, chairman of Wellington Water Watchers, said the township should avoid any kind of partnership.

"The public has said no to Nestlé and so should the mayor and [the] Township of Centre Wellington," Nagy said. "The rules have changed and this water will be 100% needed for community growth and can in no way be associated with or compete with corporate removal and profiting."

No 'acceptable solution' from partnership

In an interview in October, Linton said he did not want the province to expropriate the well from Nestlé.

But Calzavara said Linton is playing it safe and he doesn't want to antagonize Nestlé.

"All his problems would be solved if the provincial government expropriated the well and give it to them," Calzavara said, but plan B might be to purchase the well "or come to some kind of agreement" with Nestlé.

That "agreement," however, is not a proposed partnership, Calzavara said.

"That water isn't meant to be sold for profit, it's meant to be used for the people of the municipality, so it's not really an acceptable solution," he said.

"There's no point in having that discussion with Nestlé," he added. "We just can't see an acceptable solution coming out of that, that involves Nestlé getting water out of that aquifer."