A family of four from Guelph, Ont., has banished cell phones and computers, donned their cut off jeans, and combed out their mullets, vowing to live the low-tech life for a year. 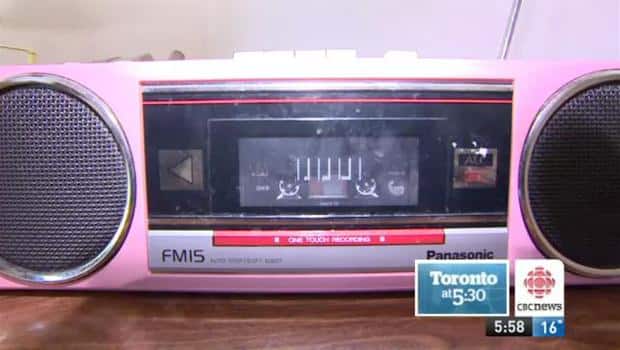 7 years agoVideo
2:16
A family of four from Guelph, Ont., has banished cell phones and computers, donned cut-off jeans and combed out their mullets, vowing to live the low-tech life for a year. 2:16

A family of four from Guelph, Ont., has banished cell phones and computers, donned cut-off jeans and combed out their mullets, vowing to live the low-tech life for a year.

Blair McMillan, his partner Morgan Patey, and their two sons Trey, 5, and Denton, 2, are playing an elaborate game of make-believe, pretending it is the year 1986 — the year Blair and Morgan were born.

They even dress the part, with mullets for the three boys, an 80s-inspired hairstyle for Morgan, a true Tom Selleck Magnum P.I. moustache for Blair and vintage clothing for all.

"No cell phones, no computers, no internet. I basically wanted to mold it around my household when I was growing up," McMillan told The Morning Edition host Craig Norris on Thursday.

"I used to live outside, playing outside, and I realized how different my kids are."

He said he noticed a number of "red flags" watching his kids grow up tethered to technology and decided he needed to take action.

"Our two-year-old was able to swipe and mimic us on the cell phone, which they do a lot, but he was learning how to play the games because Trey would always be playing the games," said McMillan.

"My 5-year-old would almost associate family with what mobile phone they had in their pockets. Say, for instance, an uncle would come and he knew he had an iPhone, he would see him, do a quick hello and reach into his pocket because he would want to play on his mobile games."

The family packed up their tablets, phones, computers and DVDs in plastic tubs and stowed them, along with three flat screen TVs, in Blair's parents' cellar.

Out of comfort zone

Blair says he now wakes up to AM sports radio in the morning, the family sits down and has breakfast together and the kids play in the backyard with the family dog after school.

"We're just always actively doing something. I think before, I was guilty myself — you just get in a comfort zone. You pop on the TV; we have 24-hour cartoon stations now; you pop on a cartoon for the kids... that's what kind of happens."

The McMillans will stay stuck in 1986 until next April. Blair says it was now or never.

"A lot of the technologies we use, rotary phone — those things, are kind of on the verge of being extinct so maybe if I wanted to do this project in five years I might not even be able to do it."