Counterfeiters get crafty: a spike in counterfeit money in Waterloo region

Waterloo Regional Police have seen a significant increase in the number of fake bills being passed off as real cash in the region this year. The fraud branch is hosting an information session Monday night to inform people what to look for and how to "know your note."

"We have seen counterfeiters cut the hologram out of smaller notes – say a $5 bill – put it on a $20," Det. Const. David Lea of the WRPS fraud branch told CBC News.

"There's a few $100 bills that we've seen that are very high-quality counterfeit notes," he added. "Really the only thing that people are going to notice the most is the paint comes off of the bank note because they don't add the varnish that's on the real notes."

This year, police have seen four times the number of fake Canadian bills being passed off as the real thing, Lea said.

That's just Canadian cash – they have also seen about 90 cases involving American money, which is on par with other years.

Denominations have been everything from $20 bills to $100 bills and counterfeiters are targeting smaller businesses and vendors at farmers' markets, like the one in St. Jacobs, Lea said.

"These counterfeiters are targeting these smaller stores when they're the busiest, if they've got somebody that they feel might be less experienced behind the counter, maybe a younger person or somebody that might be overwhelmed," Lea said.

He offered some tips to spot the fake bills.

"They're pretty obvious once you take a few seconds to look at it," Lea said.

Remember that counterfeiters are going to use a large bill for a low-priced item – the scheme is to get a large amount of real money back as change.

He also said people shouldn't be afraid to question if a bill is real if they suspect something is up. He recommended telling the person paying, "I don't think this bill is real. I'm going to call the police."

If it's a real bill, the person will likely stick around to talk to police.

"If they know that it's a counterfeit bill, they're going to leave the store as fast as possible," Lea said, adding while concerns about violence are justified, "The majority of fraudsters that I've ever dealt with are not violent people." 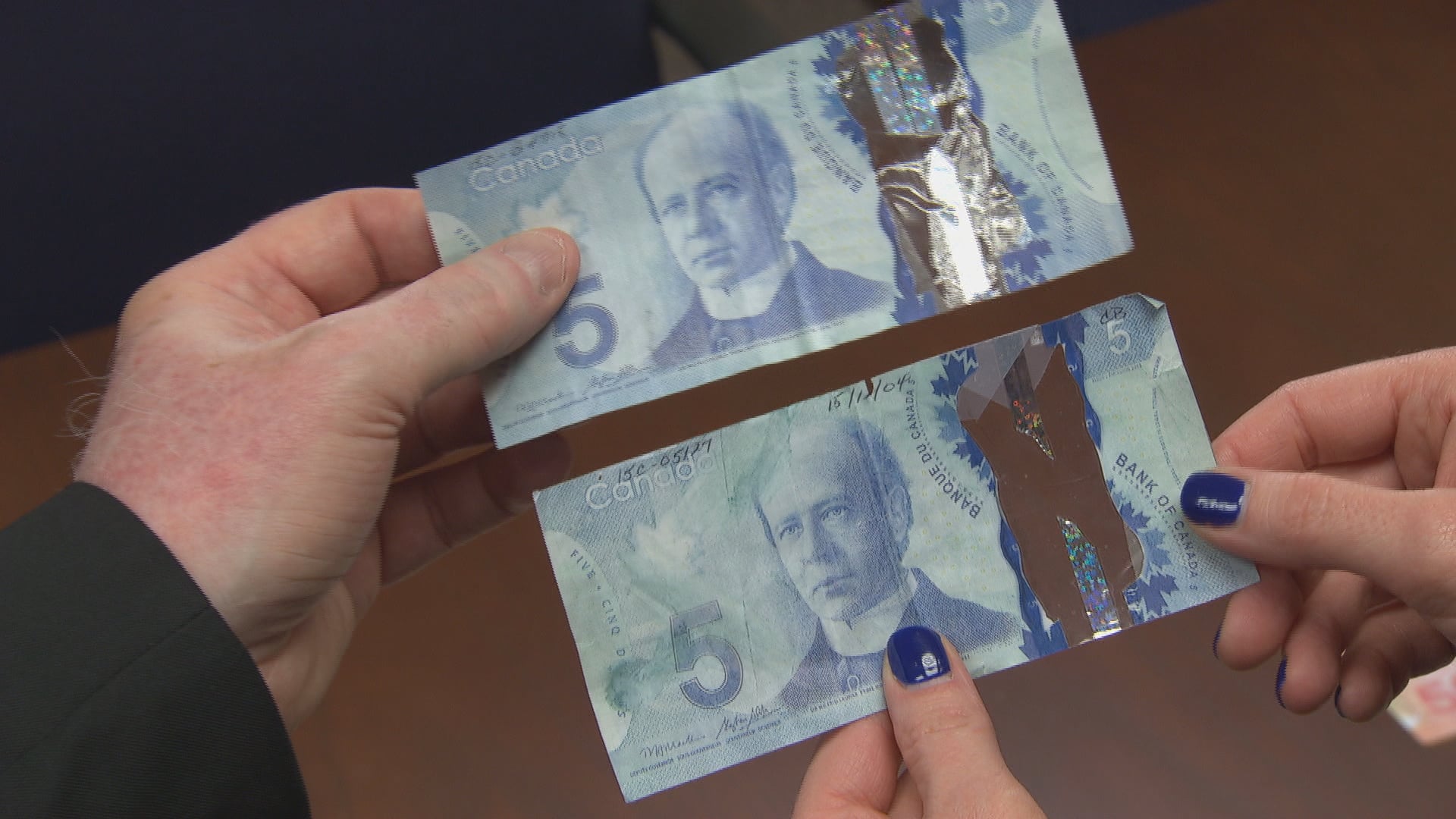 5 years agoVideo
2:36
Canada's plastic money is stumping counterfeiters. The RCMP estimate the number of fake bills passed on to retailers in 2015 dropped by 74 per cent compared with the previous year. 2:36

Police will be running a Know Your Notes social media campaign to remind people to be on the lookout for fake money.

Lea said it's important for businesses to be aware of the increase of fake bills, especially with the holiday shopping season upon us. If businesses accept counterfeit currency, they're out of luck.

"The person holding the bill last, it's kind of like a hot potato – that's the person that's going to be out the money," Lea said.