Court injunction comes too late to save Preston Springs Hotel

A heritage group in Cambridge received a court injunction to stop the demolition of the former Preston Springs Hotel, while work crews were in the process of tearing down the building. 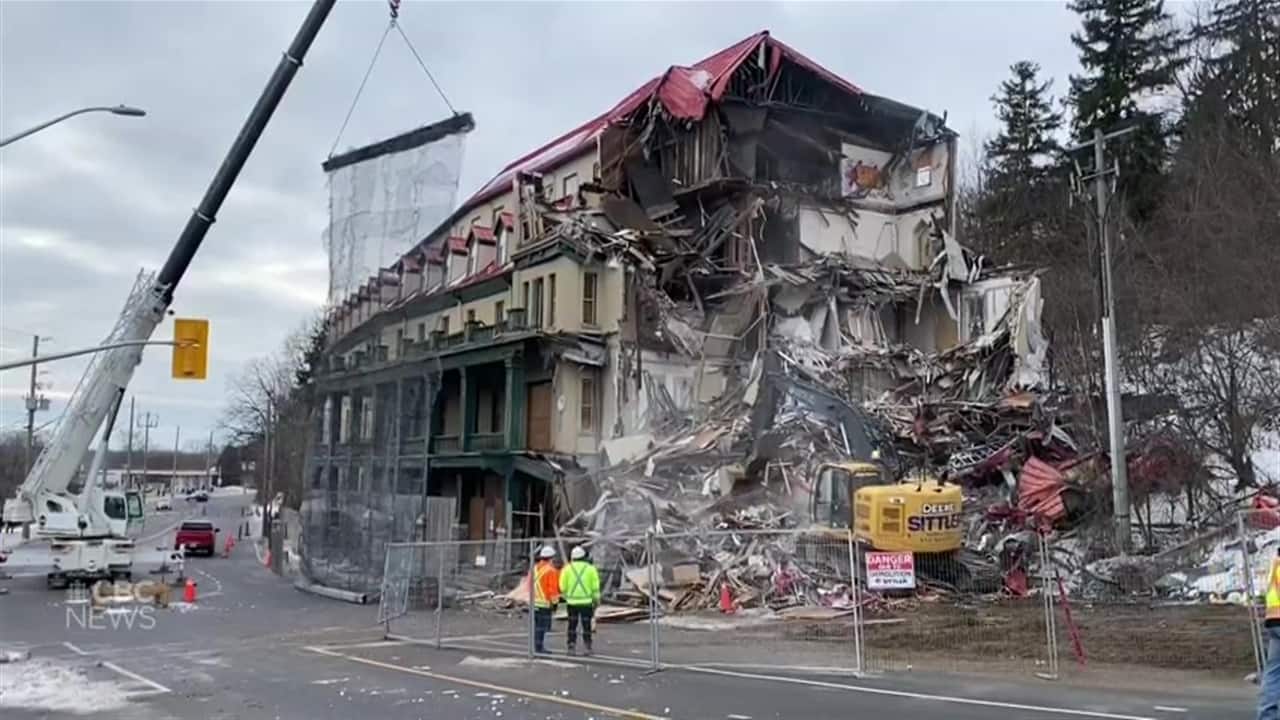 They came for one last look at a heritage building in Cambridge they had driven by for many years.

People physically distanced, some with cameras and others with signs protesting the razing of the former Preston Springs Hotel at the intersection of Fountain Street. and King Street W. on Thursday.

What was once a luxury hotel in the early part of the 20th century was slowly taken down by a large crane and an excavator.

The Architectural Conservancy Ontario (ACO) Cambridge and North Dumfries branch had been granted a week-long temporary interim injunction by the Superior Court of Justice Thursday morning, but chapter vice president Karen Scott Booth says they received word of the work stoppage just hours after demo crews had already taken out the tower portion of the building.

"By the time we actually were able to get that physical order to police to stop it, there was so much demolition underway that it actually created a dangerous situation," Scott Booth told CBC Kitchener-Waterloo.

"We could not in all good conscience allow that temporary injunction to hold up the demolition while the unsafe situation sat for a week. So we had to withdraw our application."

According to a statement from the City of Cambridge late Thursday afternoon, the ACO chapter didn't give official notice that it was making a court application to halt the demolition.

Now that the ACO has withdrawn that application, demolition has resumed, said Purcell.

"Preserving heritage is important and valuable to the community but not at the expense of public safety, and any further delay to the demolition of the building increased the possibility of someone being seriously injured or killed."

The demolition drew a crowd Thursday morning and some held signs protesting the work that said "demolition by neglect."

"It's just very difficult. Preston Spring has been a huge part of Cambridge forever, and it's a very emotional time to see this happen and it shouldn't be happening," said one woman, named Natasha.

"This is our heritage. It's so much more than what people think it is. People just say it's a building, they say it's an eyesore, but there's so much beauty to it."

Jacob Drung, a former student at the University of Waterloo's School of Architecture in Cambridge and now a Masters of Architecture student in Toronto, called the demolition "a total shame."

"It's a phenomenal example, a kind of mineral springs resort architecture, which we have very little of in Canada," said Drung.

"This was fabulous because of the number of windows, the natural light that it would have had. It would have been fantastic for seniors homes, mixed-use office complexes, even for residential, for a hotel."

The Preston Springs Hotel was built in the mid-1890s. It has been vacant and closed to the public for the last 25 years.