The Sept. 30 closing of the Kingston Penitentary, arguably the country's best-known prison, recalls many great tales that are now part of Canadian history. Here's seven things to know about Canada's most notorious prison. 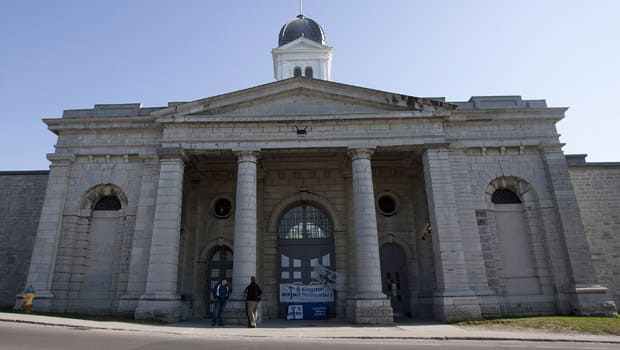 Even before Kingston Penitentiary closes its storied doors to some of Canada's most famous criminals, tourists are clamouring to get a peek inside the soon-to-be shuttered facility.

The official closing date is Sept. 30 and tours of the 178-year-old building begin Oct. 2. Tickets for the 90-minute tours, hosted by Kingston United Way, were all snapped up, including a second batch made available Wednesday that sold out in less than an hour.

Closure of Kingston Pen was announced by then public safety minister Vic Toews last year due to "crumbling infrastructure" and "costly upkeep."

But the 8.6-hectare site has figured in many great Canadian stories throughout the country's history. Here's a look at some of the biggest ones over the years.

The Penitentiary opens in 1835

When the first five convicts arrived from Toronto in 1835 to serve their time, the new prison, then named the Provincial Penitentiary of the Province of Upper Canada, was not yet open for business, and so the inmates had to be held at the county jail for five days.

It didn't become known as Kingston Penitentiary, or KP, until after Confederation in 1867.

The original rules for inmates stated that inmates "must not exchange a word with one another under any pretence whatever" and "must not exchange looks, wink, laugh, nod or gesticulate to each other," with violators receiving the lash.

The original facility was a single, large limestone cellblock with 154 cells in five tiers. Those cells were 74 by 244 cm in width and 200 cm in height.

The three other wings of the main building were completed by the 1850s and the dome that connects the four cellblocks was added in 1861. It was then the largest public building in Upper Canada.

There were children within KP's walls in the early years, incarcerated even at eight years old.

Antoine Beauche was given a three-year sentence at KP in 1845 when he was eight. "This eight year old child received... 47 corporal punishments [the lash] in nine months, and all for offences of the most childish character," according to an 1849 commission headed by a future father of Confederation, George Brown.

The report also records that inmate Elizabeth Breen was flogged six times when she was only 12 years old.

If such stories conjure up memories of a Charles Dickens novel, know that the great English writer visited KP in 1842. Dickens made a mention of it in his book American Notes, inexplicably writing, "There is an admirable gaol here, well and wisely governed, and excellently regulated in every respect."

Escapes from KP were few and far between. Two of the most famous escapes involved going over the wall with a ladder.

In 1923, the man who has been called Canada's most notorious criminal, bank robber Red Ryan, led four inmates over the wall after first setting fire to a shed as a distraction. Ryan went back to robbing banks, was captured three months later and ended up back in KP.

A model prisoner, he was released on parole in 1935, became a poster boy for prison reform, even hosting a radio program. However, in his leisure hours, Ryan had secretly returned to robbery until he was shot dead by a policeman during a botched liquor store holdup in 1936.

Bank robber Tyrone William Conn, who had already escaped from three other prisons, got over KP's 10-metre perimeter fence one night in 1999 by using a hand-made ladder and grappling hook he constructed in the prison shop. Thanks to a dummy he made by stuffing clothing with paper, his escape was not discovered until the morning.

Two weeks later, police tracked Conn to a basement apartment in Toronto. He accidentally shot himself during the standoff.

This may result in part from KP being the maximum security prison where inmates who cannot be safely integrated into other incarcerated populations are held.

In another story, we list some of KP's famous inmates from the past, including Grace Marks in 1843, whose story is told by Margaret Atwood in Alias Grace; James Donnelly of the Black Donnellys; Marie-Anne Houde for the murder of her step-daughter Aurore Gagnon in 1920; Edwin Alonzo Boyd, leader of the Boyd Gang; escape artist and writer Roger Caron; serial Killer Clifford Olson; and wife-killer Helmuth Buxbaum. Buxbaum died in KP in 2007.

There were at least three big riots at KP.

When a riot broke out in 1932, Communist Party of Canada general secretary Tim Buck was in a KP cell serving time for sedition. While guards were ordered to fire shots through the peep-hole of cells where and when they detected a commotion, they also fired seven shots into Buck's cell, which the government later admitted was just "to frighten him."

In 1954, soldiers were called in to help quell a riot involving 900 inmates that would cause $2 million in damages.

In 1971, a riot lasted four days, with six guards held hostage and two "undesirable" inmates beaten to death by the rioters. Much of the central block was destroyed, including the interior of the central dome.

The prisoners demanded that legendary journalist Ron Haggart hear their grievances. Haggart negotiated an end to the uprising, likely averting a bloodbath.

Caron, then a KP inmate, wrote about the riot in his books Go Boy! and Bingo!

KP was a "dumping ground for bad guards," with some guards terrorizing fellow staff and inmates, according to a 1989 report commissioned by KP's warden.

In 1999, at new warden Monty Bourke's request, the RCMP began an investigation code-named "Correct zero" that would use inmates as paid informants.

Eight guards were fired, although one firing was overturned. Two of the implicated guards killed themselves before the investigation went public.

An informant told CBC Radio News in 2001 that, under instructions from special prison investigators, he bought and sold booze, marijuana, cocaine and heroin through some guards, giving them a cut.

One guard agreed to a $180,000 mortgage from a mob-connected inmate who was one of the police informants.