CBC's executive vice-president of English Services Heather Conway is defending management's handling of the Jian Ghomeshi scandal, saying it was not the role of the broadcaster to investigate someone's private sex life. 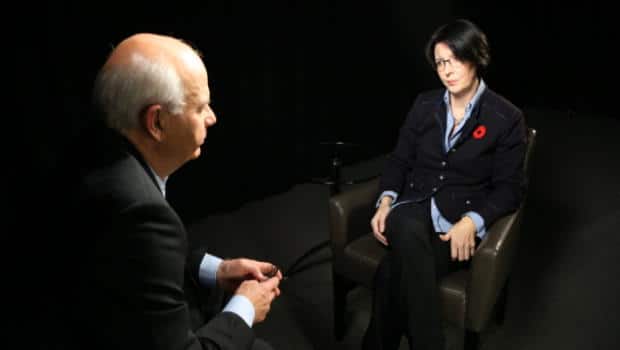 6 years agoVideo
3:54
The CBC's head of English programming talks about who knew what and when regarding the Jian Ghomeshi affair 3:54

CBC's executive vice-president of English Services Heather Conway is defending management's handling of the Jian Ghomeshi scandal, saying it was not the role of the broadcaster to investigate someone's private sex life.

CBC News chief correspondent Peter Mansbridge sat down with Conway to talk about who knew what and when regarding the Ghomeshi affair, including what changed between the CBC's internal investigation in June to the days leading up to Ghomeshi being fired in October.

The former Q radio host is facing allegations from women who claim he was physically violent to them without their consent.

"Well, I think what the focus was in June was to assure ourselves that there was nothing in the workplace. And that we had nothing outside of the workplace," Conway said. "So when we did the [human resources] investigation we didn't have a means to investigate, right, we’re not the police."

"So if somebody makes allegations about rumours of somebody’s private sex life, does the employer automatically say, 'I want to start diving into your private life? I want to see everything you have, because of allegations and rumours?'

Conway said that Ghomeshi told the CBC in April that the Toronto Star was looking into allegations about non-consensual "rough sex" and that it might be embarrassing for the broadcaster.

Ghomeshi acknowledged he had engaged in "rough sex" but denied he had done anything wrong, Conway said.

"I don’t have a movie in my head of what rough sex is, right? I hear that, I think 'OK, it’s out of my comfort zone, but it is in the realm of a person’s private life.'"

Conway said the CBC's human resources department began to investigate in June after it became aware of allegations of non-consensual behaviour that may have crossed over into the workplace.

Conway said that in their investigation, Ghomeshi's entire human resources file was looked at. She said there were no complaints in that file.

Conway repeated what she said in an email last week, that things shifted after CBC received evidence in October in which it became "an issue not about somebody’s private sex life but about somebody inflicting injury on another human being."

Conway wouldn't go into detail about what that evidence was, only that it was evidence of "an injury to a woman" and that it "moved out of the realm of sex entirely and into an issue of violence against women."

In a separate interview with CBC's As It Happens host Carol Off, Conway said the evidence consisted of videos, photos and text messages. She said she never saw the evidence, but that it was viewed by CBC's executive director of radio and audio, Chris Boyce, and Chuck Thompson, head of CBC's public affairs.

Conway was also asked why, when presented with the evidence, the CBC did not take it to the police.

“The material in question was part of a record that was characterized by Mr. Ghomeshi and his lawyers as a proof of consent," Conway said. "Our threshold at the CBC is not one of legal consent. My expectations of the behaviour of the people at the CBC and people who represent it  is much higher than the low bar of legal consent."

​Ghomeshi has previously said he only participates in sexual activities that are consensual for both partners. He denies wrongdoing and says he will "meet these allegations directly."

Conway also addressed the issue of a former Q staffer who alleges Ghomeshi made lewd comments on two occasions on a single day in 2007. On another occasion, he groped her, the woman alleges.

The woman said she was initially scared to speak out, and confided only to close friends and colleagues. By 2010, she says she’d had enough and spoke to a colleague knowledgeable with union affairs, but didn’t file a formal complaint. Q executive producer Arif Noorani has said, "at no point was an allegation of sexual harassment brought to my attention."

Conway said that while that particular complaint was not documented, it was "not well handled."

"It appears that there was a variety of issues around that, it is being investigated by the third-party investigator that we have hired, and obviously our hope is we will get some resolution on that complaint when she has the opportunity to investigate thoroughly."

But Carmel Smyth, national president for the Canadian Media Guild, criticized Conway's remarks, saying she was "deeply disappointed" that Conway "has seen fit to assign blame" in advance of the investigation.

"One would have thought there would be enough respect for the process that she'd have the patience to await the findings of the investigation," Smyth said.

She said Conway attempted to exonerate management while singling out one element by saying, "it was not well handled."

"Is this not specifically what the independent investigator has been engaged to determine?" Smyth asked. "The real question is, what did CBC management know and what did they do about it?"