The annual ice melt in Canada's North is occurring earlier and earlier, and some researchers say that and other climate-related changes are affecting the mental health of populations in Inuit communities. CBC's Sabrina Fabian reports from Rigolet, Labrador.

As millions of Canadians eagerly anticipate the arrival of warm weather, many people living in Canada's North will be lamenting the end of winter.

For the Inuit, milder temperatures mean the sea ice is melting, making travel more difficult. This ice melt is happening earlier and earlier in the spring because of climate change. In the tiny community of Rigolet, in Nunatsiavut — located on the northern coast of Labrador — research shows this is affecting the mental health of the population.

For Derrick Pottle, 60, the land is the gateway to his livelihood. He says 95 per cent of what he consumes comes from the area around Rigolet.

"It's our identity as Inuit people," says Pottle, one of Rigolet's 300 residents. "It's our connection to who we are. It's where we come from and it brings us back to our roots."

Going out on the land is a tradition that's been in Pottle's family for generations. Where travel was once by sled dogs, Pottle now uses a snowmobile. In winter, he hunts and traps on the sea ice at every available opportunity. Other than by plane, the sea ice road is the only way in and out of the remote community.

But the sea ice is becoming less reliable, preventing Pottle from going to many of the places he used to visit while growing up. He says he notices the ice is melting a month earlier in the spring and forming a month later in the winter than it did 25 or 30 years ago.

In fact, temperatures are rising in the Circumpolar North twice as fast as in the rest of the world. Other residents like Karl Michelin are witnessing the impacts first hand.

"It's like every winter is different," says Michelin. "Nowadays it's hard to predict the ice in a lot of places. Before it used to be easy to predict. But now it's changed ... there's bad ice in places."

In 2008, while working on her PhD at the University of Guelph, researcher Ashlee Cunsolo was invited to take part in a community-led study on the effects of climate change in Rigolet. She was part of a team that interviewed 100 people. Everyone interviewed spoke of the impact the changing climate was having on their mental health: increased anxiety, sadness, anger, grief and loss.

"People talked about feeling depressed and feeling trapped in the community," says Cunsolo. "Feeling unable to get out."

"One person described it like feeling like a caged animal," she adds. "The conditions weren't allowing for those regular trips out on the ice or into the environment ... so you feel trapped in the community."

Cunsolo is now the director of the Labrador Institute at Memorial University, in Happy Valley-Goose Bay, N.L. She frequently travels to Rigolet to further her research in the correlation between mental health and climate change.

Her research also indicates some people are turning to alcohol and drugs to help alleviate the stress and fill the empty time.

Pottle doesn't mince his words when asked how climate change is making him feel.

"It pisses me off, basically," he says. "I mean if I said to somebody that lived in southern Canada you have to live a certain lifestyle or you have to go here [and] you have to adapt.... It certainly changes my life. Our lives."

Cunsolo refers to it as "creeping climate change." Instead of a singular event like flood or drought, the Inuit people are faced with this new reality slowly over time. It's the kind of change most other Canadians are less likely to notice.

"Up North those subtle changes can mean the difference between ... hunting, or not feeding your family," says Cunsolo.  "Not being able to travel to the places that you need to go to feel well, or following in the footsteps of thousands of years of Inuit culture."

The term eco-anxiety is becoming more common among scholars around the world. Robert Gifford is a professor of Psychology at the University of Victoria. He is one of the few people in Canada who has studied this growing phenomenon.

He explains eco-anxiety as, "a kind of fear of what's next."

"The fear that nature is changing permanently or at least permanently within the lifetime of the people who are alive," says Gifford. "Fear for children."

Children, he says, can be particularly susceptible to eco-anxiety. He points to a recent study in Australia, where the topic has been examined more closely. He says eco-anxiety appeared in the answers children gave when asked how they thought climate change was going to affect them.

"About a quarter of these children were worried that the world might end before they got old," explains Gifford.

He acknowledges it will take time before Canadians become fully aware of the extent of climate change and the impacts it could have on their psyche. However, anticipating it is paramount as incidents become more frequent.

"It's very important to have time to build up the mental health infrastructure that's needed for this," says Gifford.

In Rigolet, there are already mechanisms in place to help the people adapt.

Inez Shiwak, who grew up in Rigolet, has been involved in the research since the beginning. She found that sewing alongside her mother and her nephew helped her find links to her culture in other ways than going out on the land.

She helps organize classes at the local community hall in the evenings, where local people teach traditional skills like snowshoe making and sewing traditional coats they call dickes.

"It helps people to relieve stress," says Shiwak. "There's no need to go out and say, 'OK, maybe I should go have a drink.' But really you don't need to. You can just go out and have fun with other people. You don't need to have alcohol or drugs to make it fun."

Thanks to a partnership with the University of Guelph, Shiwak has also helped create a mobile app, called eNuk. Currently in the pilot phase, the app is designed to help Rigolet residents who get out on the land share their findings with others. Depending on the season, residents can indicate where the hunting is good, where the ice is unsafe or where to find good berries, for example.

They can also say how the experience made them feel, which will enable them to get help if they need it, explains Cunsolo.

When it comes to adapting to climate change she believes the Inuit can serve as an example for other communities faced with similar circumstances.

"I think globally we're not going to reverse the changes." Cunsolo says. "And even if we cut all emissions now it's going to continue warming. So what we have to look at now is how do we take care of ourselves in these moments." 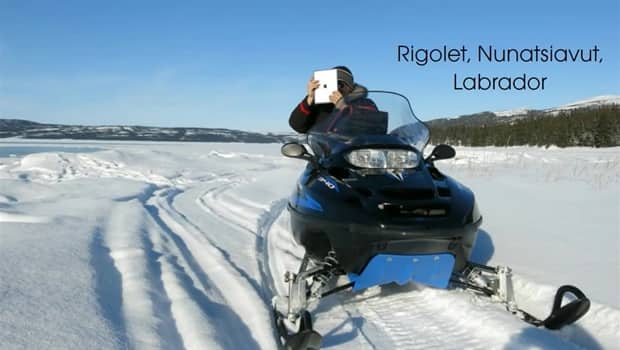 Ossie Michelin checks out eNuk, an app made by -and for- Labrador Inuit to share information about the changing land.

4 years ago
0:51
Ossie Michelin takes us to the community of Rigolet, Nunatsiavut, where Labrador Inuit and researches have developed eNuk, an app to share pictures and information about the changing land. 0:51

Sabrina Fabian is a bilingual reporter based in Halifax with more than 10 years experience. She has worked in TV, radio, online and in print. She is originally from Montreal and previously worked in Banff and Calgary.