Indigenous, Jesuit canoeists pull together on long journey toward reconciliation

A core group of about 30 paddlers from across Canada featuring Indigenous and Jesuit members are trying to complete the Canadian Canoe Pilgrimage, a month-long journey along an ancient trade route used by Indigenous people and voyageurs.

Bitten by bugs, his scraped knee bandaged to stop the bleeding,  Paul Jacques was beaming after a long day paddling on the French River. He was proud to be travelling on an ancient trade route used by his Indigenous ancestors.

He was equally pleased with the new bonds being formed with the Jesuits in the massive canoes, who organized the gruelling 850 kilometre-trip in the spirit of reconciliation.

A core group of about 30 paddlers from across Canada will have many moments on the water.

They are a mix of Indigenous, Jesuit and others all committed to completing the Canadian Canoe Pilgrimage, a month-long journey between Midland, Ont., and Montreal along a route used by Indigenous people and, later, the voyageurs plying the fur trade. Their planned journey should bring them into Montreal on August 15.

'My heart says that I need to do this'

Jacques says he can't fully explain why he chose to take a month away from his work as an electrician in the Sault Ste. Marie, Ont., area for the trip.

"Once I get there I'm sure I'll  have a better sense of why I did it," he said. "But I think my heart says that I need to do this."

Fifty years ago, in 1967, two dozen Jesuits made the same journey in celebration of Canada's centennial. This trip has the same route and destination but a much different agenda.

"We talk about reconciliation as this big, broad concept," said trip organizer Erik Sorensen, a 27-year-old preparing to become a Jesuit priest. "I think it really starts at that individual and personal level and if we're going to have reconciliation here in Canada with Indigenous, Métis, [and] Inuit, it really has to start at that personal connection.

"That's really what this is about."

The days can be long as paddlers have to try to make up time lost in bad weather. Many have aching muscles and some sport huge blisters on their hands.

Evenings, on the other hand, are shorter for the paddlers. They're often so exhausted they are eager to get to their tents and sleep. But the campfire discussions still include talks about reconciliation.

On a recent night, as the light faded, Sister Eva Solomon, a member of Henvey Inlet First Nation and an Ojibway Sister of St. Joseph of Sault Ste. Marie, sat in a chair surrounded by a circle of her fellow paddlers, leading a quiet conversation about the struggle to find forgiveness.

"We are angry for as long as it takes," she explained in a soft voice. "Until we really believe we have been heard."

Four years ago, the Jesuits formally acknowledged their role in the harm done to Indigenous children in Canada's residential school system, including schools they ran in Spanish, Ont., not far from the canoe route.

On the trip, as planned, all paddlers work together, struggling against strong currents and lifting the eight-metre, 135-kilogram canoes on lengthy portages around rapids.

They have been pursued by clouds of mosquitoes, fought huge waves that threatened to swamp their canoes and have been beset by strong winds. The teamwork required in tricky — and sometimes potentially dangerous — situations has brought them together. 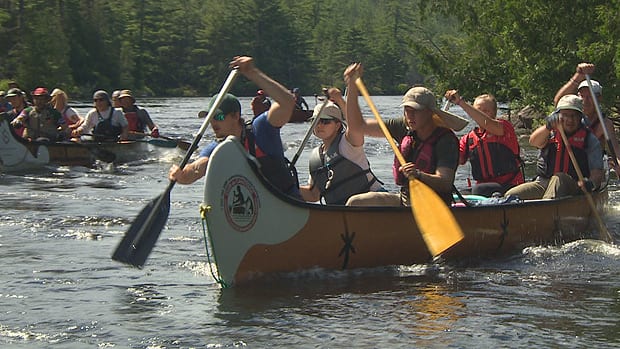 3 years ago
0:24
Canoers on a month-long journey along the French River in Ontario battle a "swift" — an area where the current is particularly strong 0:24

"That reconciliation, that we're trying to experience, is really in some ways dictated by our life as a community of living together and paddling and experiencing that together," said Sorensen.

"We've begun talking about things that are separating us, things that need to be talked about."

At the end of a long day of paddling, Jacques and Sorensen stood in golden light discussing the adventures of the day. Their canoes had been hauled to shore and overturned for the night.  Each man wore only one waterproof sandal because rushing water, in separate incidents, had carried off a piece of footwear from each man.

By coincidence, they had bought the same brand and by chance, one had lost a left while the other had lost a right, meaning between them they had a pair.

"Here, have mine," said Sorensen, offering Jacques his remaining sandal.

It didn't fit, but the gesture matched the growing camaraderie in the group.

"There's definitely a community that's forming and has formed," Jacques said. "I think our friendships are definitely going to be beyond this trip now."

Havard Gould is an award-winning journalist based in Toronto. He has reported from across Canada and the United States with special reports from London, Paris and Buenos Aires. He has, at various times, concentrated on politics and business. Now, however, his interests are almost unlimited. He can be reached through havardgould.com