Though most school boards offering online learning during the COVID-19 pandemic have set up dedicated virtual classrooms, some are adopting a hybrid model of teaching in-person and remote students simultaneously, leading to concerns from some parents and teachers.

For Steven Ferracane, a teacher in Vaughan, Ont., and some of his Grade 5 students, it was the first day of school all over again this week, as the York Catholic District School Board, north of Toronto, introduced a new pandemic scenario combining in-person and online learners in the same classrooms.

"It went OK considering it was our first day. The remote students, they all showed up on time, eager to learn," said Ferracane, who now simultaneously teaches 15 fifth-graders in a classroom at St. Raphael the Archangel Catholic Elementary School, with seven more logging on live from home.

"We're actually so happy to welcome them back to our school."

Though Ferracane believes this new hybrid model lays the groundwork in case of another widespread school shutdown due to a COVID-19 outbreak, he said it requires juggling his attention between the live students and remote learners — to whom he connects through his dedicated laptop — and means more work for him.

"I'm kind of looking at both of them at the same time, kind of bouncing a little bit back and forth.... As we progress, I'm hoping that we develop some sort of a routine," Ferracane said on Wednesday.

"But these are the situations, the circumstances that we're in.... It requires a lot of planning, a lot of collaboration with your colleagues, to bounce ideas off each other [and] share resources."

The hybrid scenario of teaching both in-person and remote students simultaneously hasn't typically been the format boards have adopted for their remote, elementary school learners this fall, with the majority establishing dedicated virtual classrooms.

In some cases, however, a school division may have paved its own way. Edmonton Catholic Schools, for example, asked elementary educators to choose between teaching in-class or online students, with some agreeing to the model of tackling both simultaneously, said Lori Nagy, the board's manager of media and community relations.

In other areas, virtual schools had to follow provincial directives. Regina Public Schools hasn't considered a hybrid model, said Terry Lazarou, the division's supervisor of communications, noting that the Saskatchewan Ministry of Education had told school divisions "that this was not an option."

However, as challenges with online school staffing and class reorganization continue in different regions, more could potentially opt for this hybrid approach, which has already earned some criticism from families and teachers.

"We'd finally got the hang of it and it was working. The teachers were wonderful.... [My sons] weren't really aware that they were separate," Cianfrone said, since all of their classmates were learning from home.

She's been so upset since learning of her board's switch to a hybrid model that, after commiserating with other virtual school families in the board, she started a petition urging the leadership to change its mind.

"The email that was sent home was saying that this is better for the kids, because kids would be happy to be a part of their home school. But the kids don't see their classmates," Cianfrone said.

"My son [Jobim] is extremely frustrated because now he knows that [other] kids are at school. He no longer sees the friends that he had on virtual anymore because they are now in another class.... It's frustrating to feel like you don't have a voice. You don't have a choice."

Cianfrone said she has multiple concerns, from teachers balancing the needs of two very different learner groups to whether remote students can effectively access an educator engrossed with an in-person class. Though she thinks teachers are doing their best, "it's just physically and logistically impossible to do that [hybrid] job and provide equitable education for all kids," she said.

"This is not the way you want your kids to learn."

York Catholic teacher Mary Marcello expressed similar concerns about difficulty connecting with students under the hybrid model. Her first day on Wednesday required three computers: one projecting onto an interactive board for her in-class learners and two more beaming her face and an information screen to her remote students.

"I am concerned that I won't be able to meet the individual needs of all the learners, both remote and face to face. I am concerned that I'm not going to keep them engaged enough.... They all have a right to education," said Marcello, who began September tasked to teach a Grade 2/3 split in person before being moved into an itinerant role. The latest shuffle sees her teaching a class of Grade 3s in-person and Grade 2s remotely.

"Every plan that is presented to us, we want it to work," she said. "It's unfortunate that it wasn't well thought out, that all stakeholders were not consulted to make this less disruptive, so that there wasn't a constant shift in class placements."

Calling the hybrid model "an imperfect approach during an imperfect time," Upper Canada District School Board's director of education nonetheless believes that amid the uncertainties of the pandemic, it's the choice that gives his district's families the flexibility to move between learning at school and at home — as well as provide continuity of learning in case of significant disruptions.

Stephen Sliwa and his colleagues at the eastern Ontario school district — which covers much of the region surrounding but not including the city of Ottawa — were taken aback by a post-Labour Day surge of about 20 per cent of families choosing virtual learning. An earlier survey had projected just six per cent would choose learning at home.

However, after examining various remote-school models being prepped across the province, the board found that "they either didn't make immediate sense to us pedagogically or were not affordable based on the resources the school district had or that we would not have the human resources in order to staff," Sliwa said.

What Upper Canada District ultimately put into place is a hybrid model in which its educators teach students in-person and virtually at the same time, as well as any students whose families have requested either online learning (not delivered live) or offline learning.

"We did have to take some very quick action ... to accommodate and to respond to the learning preferences that families had articulated and to make sure that we didn't contribute to the uncertainty of having to change the model once we were already midstream," he said.

WATCH | First day of school — again — as Ontario board moves to hybrid model: 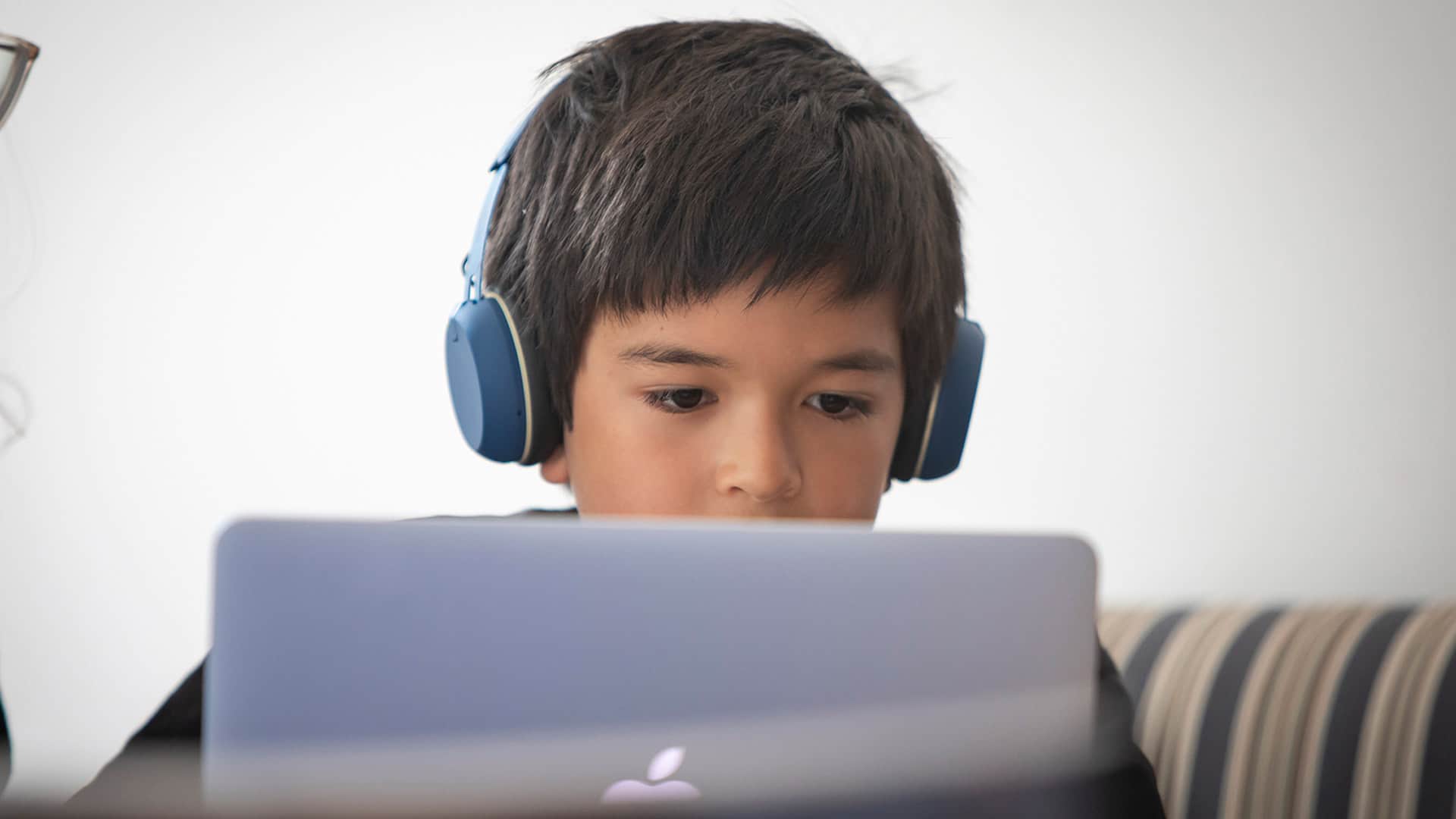 7 days ago
2:02
After an increase in demand for online learning, the York Catholic District School Board outside Toronto has moved to a hybrid learning model where the classroom is made of students in school and online, but many parents are frustrated with change and calling for full, online learning to come back. 2:02

Still, the best-laid plan on paper isn't what's happening in the classrooms, said Kavita Prakash, a parent in Almonte, Ont., whose nine-year-old daughter, Shyla Barr, is a synchronous virtual student at an Upper Canada District school.

"Their argument in favour of [a hybrid model] was our kids are joined with their classmates and — if we change our mind and want to get back in the classroom — it's an easy transition, which does sound good in theory," Prakash said.

"It was, in my opinion, doomed to fail."

As someone also currently teaching online — full time at an English CEGEP in Gatineau, Que., as well as on contract at Ottawa's Carleton University — Prakash is acutely aware of the struggles in reaching students through a screen.

"You do a song and dance in the classroom anyway, but now it is more so."

Add in myriad technological woes — from bandwidth issues that regularly kick online students off their connections to in-class noise drowning out their efforts to participate — and the result is virtual students like her fourth-grade daughter are consistently facing an uphill battle, Prakash said.

"I see her at a little desk [at home] with her hand up, asking questions and trying to get involved. And she feels ignored."

Though her daughter's teachers are making extra efforts to connect — one plays his guitar for all students at morning snack time, while another held weekend meetings to help get parents up to speed on online platforms — even the most exceptional educators cannot succeed since they're being forced to split their attention so many different ways, Prakash said.

"Teachers are being taken advantage of," she said. "It's not so much that I'm seeing online learning as a problem. It's how they're having these teachers do it that's a huge problem."

Passionate appeals from vocal parents like Cianfrone and Prakash can, however, put a chill on adoption of the in-class-and-live-online scenario.

Dufferin-Peel Catholic District School Board, located in the west end of the Greater Toronto Area, announced last week it would merge in-class and live online instruction in early November, citing the challenge of increasing numbers switching to virtual. This week it partially dialled back the plan — now to take effect in mid-November — after a torrent of protest from remote-learning families who had just settled into their virtual classrooms after earlier delays and problems.

Now, "we are looking at a combination of [dedicated] remote and hybrid, with a commitment required from parents to remain in their selected mode for the remainder of the school year," Bruce E. Campbell, the board's general manager of communications and community relations, said in a statement.

"This will mean that we will have to undergo reorganization in schools/classes only one more time for the remainder of the school year."