U.S. presidential candidate Hillary Clinton brought her new book tour north of the border Thursday night and told an audience of thousands in Toronto that truth and democracy are under attack not just in her country, but around the world.

Hillary Clinton warned Canadians that "democracy is under attack" not just in the United States, but in Canada and around the world, and she told a Toronto audience Thursday night that she will do everything she can to fight against the forces trying to undermine it.

"Democracy is under attack everywhere. It's not only my country," Clinton told a packed hall of an estimated 5,500 at the Enercare Centre. She pledged to use her voice and platform to encourage people to get involved and help tackle the things that are challenging democracy in the U.S. and globally.

"I'm not going anywhere except right into the middle of the debates about our future," she told the sellout crowd.

The Democratic presidential candidate who lost to Donald Trump last November was north of the border to promote her new memoir about the 2016 election, titled What Happened. She will also make appearances in Montreal and Vancouver in the coming weeks.

She outlined key lessons she says she wants Americans and Canadians to learn from the election. These lessons will help determine whether Americans can "heal our democracy and protect it in the future," said Clinton.

She wrote the book with these lessons in mind because she wants future generations to know what happened, the former secretary of state said. "But I also want a concerned world to recognize that democracy is under assault," she said.

Clinton writes in her book that her campaign made mistakes and she takes responsibility for them, but she spreads the blame around too, and spoke about that on stage.

A political press obsessed with her emails and the "unprecedented intervention" of former FBI director James Comey were factors that contributed to a "perfect storm," said Clinton, but she spent a good portion of her remarks talking about Russia and the "successful information warfare waged from the Kremlin."

Clinton said Russia's ability to spread lies and misinformation online about her that reached and affected American voters is something Canadians should be worried about.

We are living through an all-out assault on truth and reason.- Hillary Clinton

"It's a clear and present danger to our democracy and I think to any democracy in the West," she said. The ongoing threat from Russia's efforts to undermine democracy "requires us to act and act decisively," said Clinton.

She said she is warning Canadians, and anyone, anywhere, running for office that they too can be victims of misinformation and propaganda campaigns.

"That's one of my pleas to everybody — we have to pay attention to this and we need to find solutions to it," she said.

She also took sharp aim at Wikileaks and its founder Julian Assange, describing him as a puppet of Russian President Vladimir Putin, and accusing the website of making stories up.

"Assange is somebody who I think is very much in the orbit, maybe even the control, of the Kremlin, doing its bidding," said Clinton.

Russians aren't the only ones spreading misinformation though, Clinton said, referencing Trump and his White House staff who talk about "alternative" facts and deny plain truths.

"We are living through an all-out assault on truth and reason," she said.

The former New York senator offered rallying cries to the audience, encouraging them to speak out in the face of sexism, racism and bigotry and to stand up for human rights. She encouraged them to hold elected leaders and the media accountable "when they do not perform on behalf of truth and accuracy."

She talked about sexism in politics in her hour-long talk and said the best way to get rid of it is to elect more women. She said she applauded when Prime Minister Justin Trudeau chose a gender-balanced cabinet.

Clinton also gave a nod to Canadians she said she met on her campaign trail who came south to help her attempt to become the first woman president in the U.S.

She said the post-election period when she was writing the book and reflecting on what went wrong was "painful." So was listening to the news as Trump did, said or tweeted something controversial on an almost daily basis, she said. Walks in the woods and glasses of Chardonnay helped her cope. 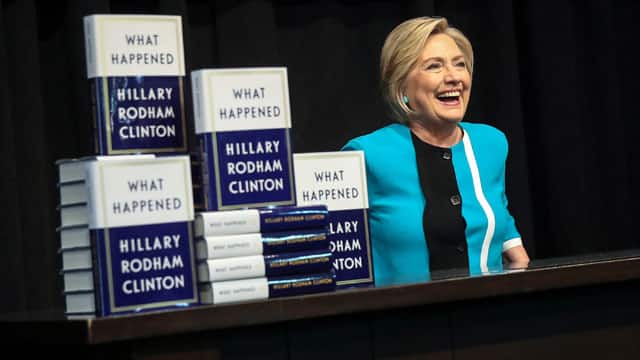 3 years ago
2:26
In her new memoir, What Happened, Hillary Clinton finally speaks out about why she thinks she lost the election to Donald Trump 2:26

Clinton ended her Toronto event on an encouraging note, saying she's optimistic but realistic about tackling the big issues that her country is facing.

"That means that I am going to get up every day trying to figure out how to do what I say is resist, insist, persist and enlist," she said.