Police have arrested a fourth person in relation to the violence at Hamilton Pride - this time an anti-Pride activist known on social media as "helmet guy."

Christopher Vanderweide has been charged with assault with a weapon

Police have arrested a fourth person in relation to the violence at Hamilton Pride — this time an anti-Pride protester known on social media as "helmet guy."

Police say Christopher Vanderweide, 27, of Kitchener has been charged with two counts of assault with a weapon after the June 15 altercation. His bail has been opposed.

Videos have circulated on social media of someone resembling Vanderweide smashing people in the face with a helmet.

Vanderweide was part of a group of religious extremists who went to Gage Park during a Pride celebration June 15. The group held homophobic signs and called to Pride attendees through a speaker. A group of people wearing black clothing and pink masks used a portable barrier to hide the signs, and Pride supporters joined in with signs and noise makers.

Online videos show a scuffle breaking out and punches being thrown. Several people were injured, but at first, they wouldn't cooperate with police. After several public calls, some victims and witnesses have finally came forward, said Supt. Mike Worster of Hamilton Police Service.

The clip below is an excerpt from a video shot by an anti-Pride protester (warning: graphic language and violence) 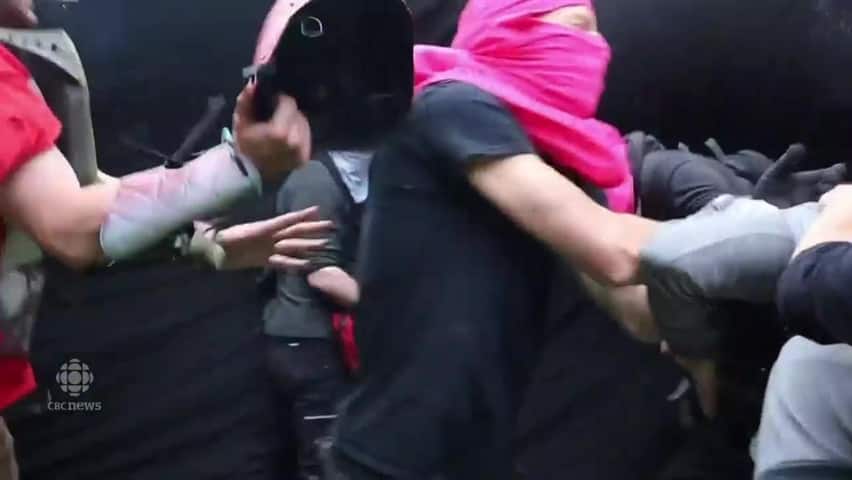 "We're happy that people cooperated with us," he said. "It helped us to get to where we are today. We know it wasn't a quick timeline."

"As we continue with the investigation, if there's more evidence, there will be more charges."

Vanderweide is the fourth arrest so far. The others have been Pride supporters, which has drawn the ire of some LGBTQ Hamiltonians.

Cedar Hopperton, 33, was arrested during a peaceful anti-hate rally at city hall Saturday for what police say was a parole violation. Police say Hopperton, who was on parole after a conviction last year for vandalism on Locke Street, was part of the Pride confrontation, although Hopperton's friends and supporters dispute that. Hopperton is currently in the Hamilton-Wentworth Detention Centre awaiting a parole board hearing.

Two other people have turned themselves in for breaching probation and participating in a demonstration that wasn't peaceful. The Tower, an anarchist social space, has said on Facebook that those arrested were associated with the pink-mask counter-protesters.

As for Vanderweide, a person in similar clothing and with similar paraphernalia was also seen on video in violent clashes after a Dyke March that was part of Toronto's Pride celebrations last weekend. Toronto police are investigating that incident in the Eaton Centre.

Hamilton police have been criticized for not moving more quickly to arrest people seen in social media videos being violent at the Pride event.

Palma Paciocco, an assistant professor at Osgoode Hall law school, said prosecutions based on video evidence aren't as simple as seeing someone on video and arresting them. In court, she said, the Crown has to establish the video's accuracy and fairness in representing what actually occurred. To do this, the Crown can present testimony from the person who produced the video, or from another witness who can testify that the video accurately depicts what took place.

"You need the evidence to be admissible in court," she said Tuesday. "Presumably, any Crown running this case would like to be able to authenticate the video. When it is a clear video, it can be extremely powerful evidence."

Cameron Kroetsch from Hamilton Queers Against Hate said the arrest today "should have happened at Gage Park on June 15."

He also wants police to address what Pride Hamilton said was a slow reaction when the violence broke out.