Pigs know their fate when they enter a slaughterhouse, expert says

Pigs are "sentient beings" with emotions and empathy similar to dogs, and they know what they're in for when they enter a slaughterhouse, said an expert during the trial of an animal rights activist Anita Krajnc.

Pigs are "sentient beings" with emotions and empathy similar to dogs, and they know what they're in for when they enter a slaughterhouse, said an expert during the trial of an animal rights activist today.

Neuroscientist Lori Marino was one of two defence witnesses in the fifth day of the Anita Krajnc trial in the Ontario Court of Justice in Burlington, Ont.

Krajnc, founder of the group Toronto Pig Save, is charged with mischief for giving water to pigs en route to Fearman's Pork Inc. on June 22, 2015. She has pleaded not guilty, and if convicted, faces a maximum $5,000 fine and jail time.

Marino, a founder of the Kimmela Center for Animal Advocacy, testified that pigs sense the emotions of other pigs through "emotional contagion."

"Pigs are at least as cognitively aware as a monkey," said Marino, commenting on a video of a slaughterhouse in Australia. The high-pitched squeals, she said, are "distress calls."

Pigs have individual personalities, Marino said. They're also one of the few species that can recognize themselves in a mirror.

"They have self-awareness, self-agency and have a sense of themselves within the social community," she said. "Each one is a unique individual."

Krajnc said the pigs she had provided with water were dehydrated and suffering. Halton police said they had no way to prove Krajnc was giving them water and not some other liquid.

Krajnc's lawyers have called experts in diet, animal behaviour and neuroscience to testify that Krajnc was acting in the public good. They're also using the trial as a chance to highlight what they say is poor treatment of animals in factory farming.

Agriculture organizations say this is a diversion and ignoring the real issue — that Krajnc was tampering with someone's livelihood. Bruce Kelly, program manager of Farm and Food Care, said Tuesday that Krajnc's lawyers seem to be "cherry picking" videos that aren't even from Ontario.

Avowed vegan David Jenkins, a University of Toronto researcher who invented the glycemic index, also took the stand for Krajnc on Tuesday.

Neither witness was cross-examined.

Since the trial started, Halton police have also charged Krajnc with obstructing police and breach of recognizance.

Krajnc was at the scene on Oct. 5 when a tractor-trailer carrying about 180 hogs flipped near the slaughterhouse. 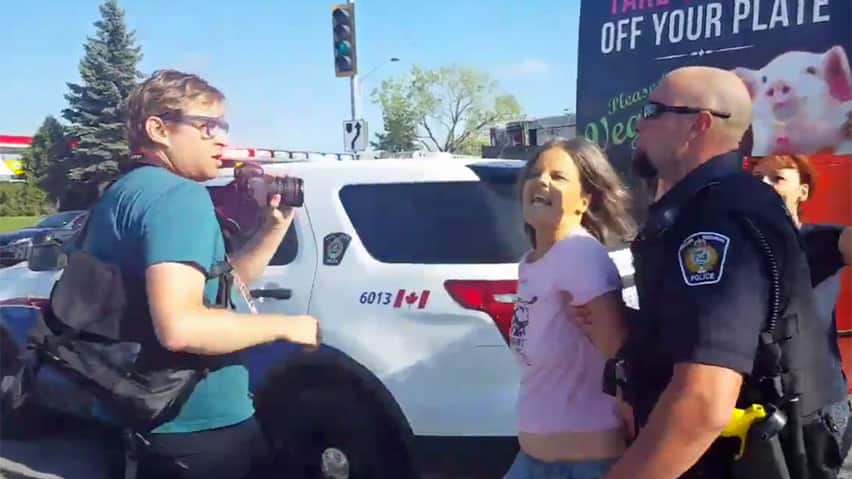 4 years ago
0:41
Anita Krajnc from Toronto Pig Save was arrested again at the scene of a rollover of a truck full of pigs this morning in Burlington. Krajnc is currently on trial on mischief charges for giving water to pigs headed to slaughter. 0:41

"She's under arrest because she's not listening," an officer told a protester at the scene.

The driver of the truck, who was treated for minor injuries, was also charged. The surviving pigs were slaughtered.

Here's a quick recap of the trial:

Truck driver Jeffrey Veldjesgraaf was the first Crown witness. Justice David Harris watched a video of a tense exchange between Krajnc and Veldjesgraaf. In the video, Veldjesgraaf told her to stop giving water to the pigs. "These are not humans, you dumb frickin' broad," he said.

Oxford County hog farmer Eric Van Boekel was a Crown witness. His testimony revolved around how pigs are "processed" and transported to Fearman's Pork Inc. That particular load was worth about $45,000, he said. Van Boekel was questioned about previous environmental infractions.

Veterinarian Armaiti May was the first defence witness. She analyzed the Toronto Pig Save video and told the court the pigs in the video appeared to be in severe distress.

Krajnc testified in her own defence. "I just find it unfathomable that someone would be charged for giving thirsty animals water," she said. "In the three years we've given water to pigs, police have been present, so we took that as an endorsement."

The trial resumes on Nov. 10. The defence plans to call Tony Weis, an associate professor of geography at London's Western University. Weis will testify about how a switch to a plant-based diet would reduce climate change and pollution.

The Crown and defence will make closing arguments in March.