Patrick Brown leads in polls but there's trouble ahead: Fisher

How does 'Ontario Premier Patrick Brown' sound? If the latest opinion polls are correct, the Progressive Conservative party leader has a good shot at becoming Ontario's next Premier. Robert Fisher, the CBC's Ontario political analyst, warns, however, that there is trouble ahead. 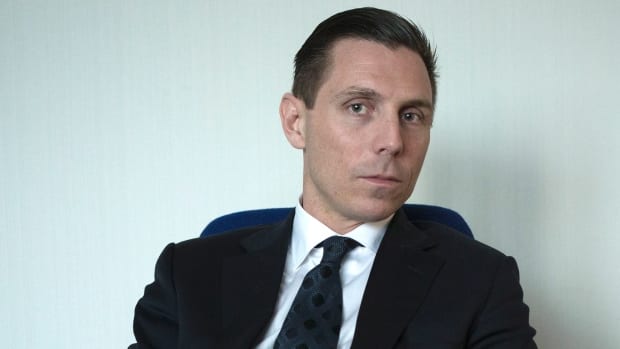 Hamilton8:13Patrick Brown leads in polls but there's trouble ahead: Fisher
How does 'Ontario Premier Patrick Brown' sound? If the latest opinion polls are correct, the Progressive Conservative party leader has a good shot at becoming Ontario's next Premier. Robert Fisher, the CBC's Ontario political analyst, warns, however, that there is trouble ahead. 8:13

If the latest opinion polls are correct, the Progressive Conservative party leader has a good shot at becoming Ontario's next Premier. A Forum research survey conducted in August had Brown's Conservatives up by 13 points on Kathleen Wynne's struggling Liberal party at 28 per cent with the New Democratic Party rising to 23 per cent.

But, the votes aren't cast yet. And Brown has a few problems inside his own party. He has angered social conservatives by saying he was "mistaken" for opposing changes to Ontario's new sex-ed curriculum.

Political analyst Robert Fisher spoke with Conrad Collaco of CBC Hamilton about the challenges that face Patrick Brown. Fisher, a long-time Queen's Park reporter for the CBC, will deliver his take on provincial politics every two weeks. You can listen to the full interview by clicking the image at the top of this page or read an edited and abridged transcript of the interview below.

Why are the Tories doing so well in the polls?

I think it's a reflection of a deeply unpopular Liberal government. Everybody is in a state of angst about the situation with hydro rates and the potential sell off of parts of Hydro One and other issues that have dogged the Kathleen Wynne government. You see people looking for an alternative in an election that is about 20 months away. Polls come and go but for Mr. Brown there has been a trend line. Since he became leader in 2015 it has been mostly up for the party and mostly down for Kathleen Wynne and to some extent for Andrea Horwath of the NDP even though she remains personally popular.

These polls are a snapshot in time. A poll taken this morning might change by Monday or Tuesday of next week. There seems to be some support there temporarily. Often between elections people in this province park their votes. People seem to be parking their votes with Patrick Brown and the Conservatives even though, when you drill down in the polling, not a lot of people seem to know who this guy is.

Patrick Brown was a little-known federal Tory backbencher when he was elected leader of the Ontario Progressive Conservatives. How has he been doing when it comes to connecting with voters?

Very well. People are coming out to hear an opposition leader in relatively large numbers. He has certainly been out and about the province spending a lot of time outside of Queen's Park though very active in the morning Question Period, or as I often refer to it — the best theatre in Ontario. It's important for him to connect to voters one on one. When Mike Harris became Conservative leader in this province he spent a lot of time outside the legislature. There were complaints about 'where is the Conservative leader.' But, he was working from Tim Hortons to Tim Hortons across the province sitting down and talking and engaging voters. Mr. Brown has done that. He's a runner. That's his main pre-occupation outside of politics. He's been running very hard since he became leader trying to get around the province to get known to people. Then he can start putting 'meat on the bone' to show people what he is all about. That will be the key to his success between now and the next election.

Brown has been able to convince some high profile people to run in 2018 like former Ontario ombudsman Andre Marin. What does that say about Brown?

It says that people believe that he has what it takes to be Premier. If there was any doubt in people's minds, as there was with Tim Hudak, the high profile people may be sitting out the election. Mr. Morin is an interesting case. A very controversial public servant who rocked the Liberal government with reports on what they were doing or not doing. Now he has decided to be a candidate in an as-yet-to-be-called by-election in Ottawa Vanier, likely to be a candidate in the general election.

Then you have in the Hamilton area Rick Dykstra who is a former Tory MP from St. Catharines and is now interested in Tim Hudak's seat in the Niagara region. People now believe they have a chance at being in government. But, if you are Mr. Brown you have to balance if you really want to bring in people from an unpopular federal government into your ranks. So he'll say 'yes' to some and 'no' to others because he has to seek this balance.

Are there members of the party who question Patrick Brown's ability to lead?

I think there are. People will tell you privately there are some concerns: the apparent flip flop over the sex education curriculum. He was opposed then he was in favour. He was opposed. Now he's in favour again. That concerns some social conservatives in the caucus who worked so hard to get Mr. Brown elected. He was very firmly against sex education curriculum and gay marriage but he led a large delegation of Conservative MPP's in Toronto's Gay Pride parade.

There is a change there. It makes him a difficult target for the Liberals to hit. Every opposition leader faces, what David Peterson — former Ontario Liberal leader — used to call internecine warfare. People have kept their knives sheathed in the Tory caucus because there is a chance he could be successful. But there are always concerns from people who believe they have been overlooked for a job or promotion in the government. As a leader you just have to deal with that kind of thing.

Do you think Patrick Brown has what it takes to bump Kathleen Wynne out of the premier's chair?

Tough question. If you talk to Conservatives, obviously the answer is yes. If you talk to Liberals, obviously, the answer is no. You have to take a look at the situation Kathleen Wynne faced in 2014. The party was seen as dead on arrival after Dalton McGuinty. Many people believed Tim Hudak was ready to be Premier. The 2014 campaign showed that campaigns do matter. Mistakes by Mr. Hudak meant that now he's the new CEO of the Ontario Real Estate Association and Kathleen Wynne is still the Premier.

It will be very important for Mr. Brown to begin defining himself between now and the next election so that people know what he stands for and who he is. It's a big job. He is working to unify the party and bring new people in and bring in some new ideas. So far there has been success. Time will tell how successful he is.