The catch, says the mayor, is defining what a hate group is. The city will consult with numerous groups to find out.

The catch, says the mayor, is defining what a hate group is

Hamilton city officials are looking into banning hate groups from parks and public facilities — but first, they have to be sure they're properly defining what a hate group is.

City council's general issues committee ordered a staff report Wednesday about how to draw up such a ban.

Mayor Fred Eisenberger seconded the move by Coun. Tom Jackson of Ward 6, saying he agrees with the sentiment "completely."

But he wants to make sure the city has a solid definition of what constitutes a hate group, as opposed to just groups that disagree with each other.

"I don't want to see hate groups in our community, let alone renting our facilities or parks," he said. "But we have to be careful in defining what a hate group is." In some cases, he said, it's subjective.

Ken Stone from the Community Coalition Against Racism told councillors a hate group is any group that targets protected groups under the Ontario Human Rights Code. That includes discrimination based on age, race, ethnic origin, disability, gender identity or expression and sexual orientation.

Evelyn Myrie, a local diversity advocate from the Afro Caribbean association, agreed there needs to be "a community conversation" before implementing a ban. The city has to make sure it's not infringing on people's freedom of expression, she said.

It has to look at "how can we proceed to make a more fruitful and strategic move, so at the end of the day, everyone wins."

Seven speakers urged councillors to make the move Wednesday, including members of the Sikh, Muslim and Afro-Caribbean communities, as well as a rep from the McMaster Indigenous Student Community Alliance.

"If we allowed hate groups the space and opportunity to engage in hate speech, this places minority groups in a very dangerous position indeed," said Ray Fawaz, a Muslim of Lebanese origin. 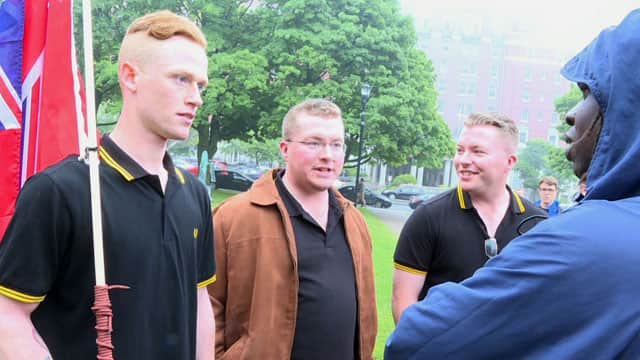 3 years ago
2:11
White supremacists aren't just a problem in the U.S. The groups are quietly gaining ground in Canada too. 2:11

This move comes after far right groups such as Sons of Odin have done park clean ups and protests in Hamilton.

Hamiltonians Against Fascism are planning what they call a counter-rally against an apparent plan from a collection of far right groups to march on Locke Street on March 25.

The march would come after masked vandals destroyed property on Locke Street. The Tower, a local anarchist social space, said on Facebook that it didn't commit the acts, but supports them.

Every councillor was in favour of Wednesday's motion, which city council has to ratify on March 28.

​The UN has designated today the International Day for the Elimination of Racial Discrimination.