Why we strike: Hamilton teacher explains why he's on the picket line

Hamilton teacher Joe Cappadocia explains why the teacher's strike is not about compensation. He says Ontario has a great education system and funding cuts won't keep it that way.

Music and the arts are the first courses to be cut, teacher says 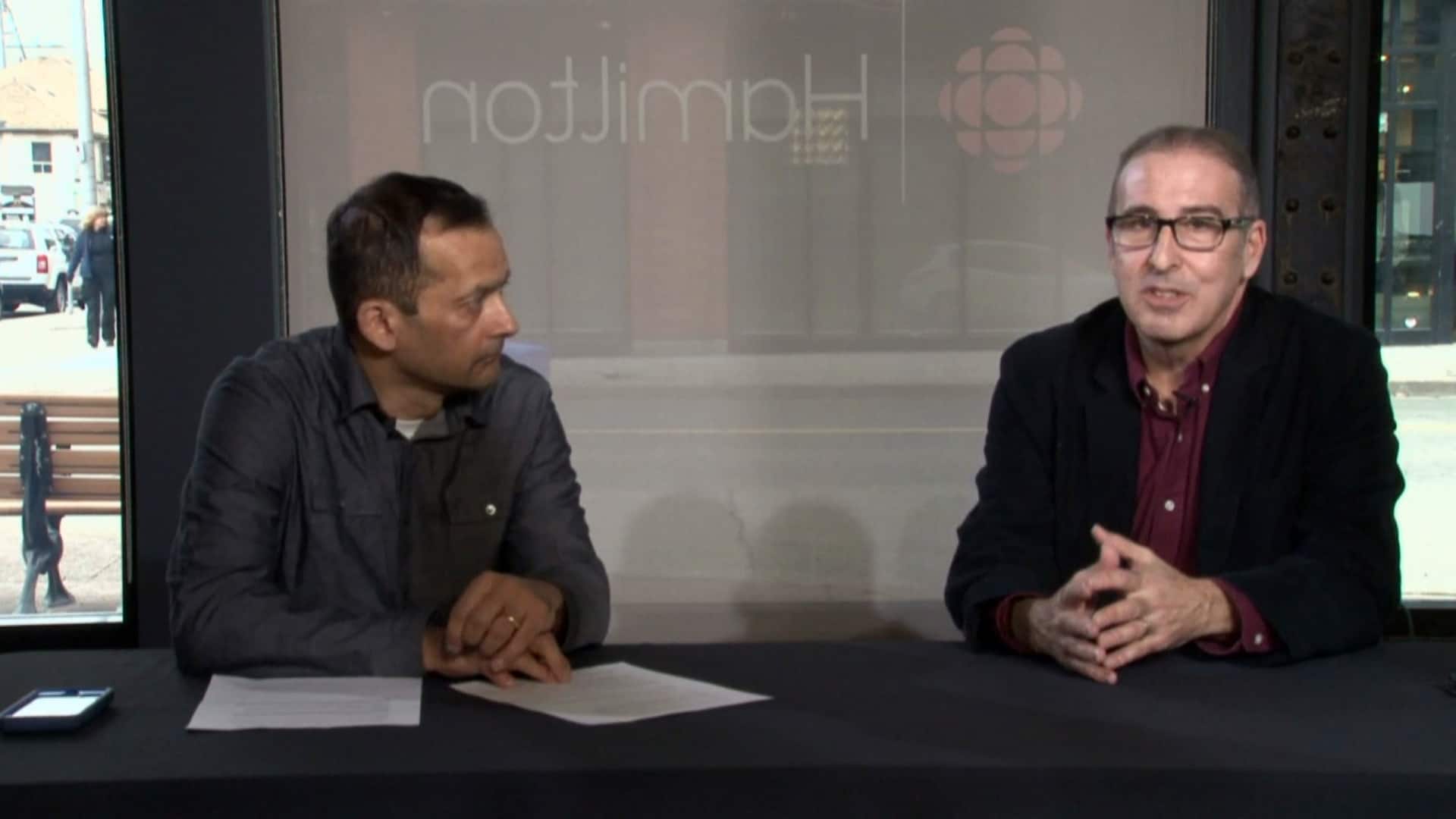 Talk to a teacher: strike chat Tuesday at noon with a Hamilton high school teacher

1 year ago
23:16
Joe Cappadocia, a teacher Cathedral High School in Hamilton, responds to your comments and questions about the teacher's strikes happening in Hamilton and around the province. What do you want to say to Hamilton teachers? 23:16

After several failures at the bargaining table, it seems there is no end in sight across Ontario to the rotating teacher's strikes.

Ontario Education Minister Stephen Lecce says this is all due to teachers wanting an increase in compensation that the government just can't afford. Teachers and their representatives at the bargaining table say it has to do with much more than that, including class sizes and e-learning — among other serious issues that have a serious impact on students.

Hamilton high school teacher Joe Cappadocia spoke with the CBC's Conrad Collaco about why he's striking, what he's hearing from parents and students and what he'd say if he was face-to-face with Minister Lecce. A representative of the minister's office was invited to join the interview but was unable to attend.

You can read an abridged and edited version of the interview or watch to the full interview by hitting the play button above.

How do you respond to the suggestion that teachers are well-paid and this labour dispute is about their compensation first and foremost? (At 1:59 in the video)

If compensation is not the main issue, what is?

Yes. I was speaking with my principal yesterday and he said it would be almost impossible to go to that level without having classes that are 35, without having classes that are 45 students. You know, the classroom today is very, very different than it was. There are a lot of students in the classroom with individual needs, students with anxiety, autism, students with diagnosed learning disabilities, with IEP's (individualized education plans). It's a very different classroom than it was 15 to 20 years ago and we can't offer the guidance that the students need to make that connection with the students.

Teaching is really about building a relationship with the students. It's about gaining their trust. We're no longer the sage on the stage up there just imparting information on the students. We are engaging with them in the learning process. We are there to guide them through this process. I was listening to CBC's Ideas yesterday about the teenage brain. There was a recent episode and they called teachers the prefrontal cortex of the students, there to give them the guidance to help them through this process. I really think that's hard. That's what we are about and that's what we need to be doing now. With this class size increase it just becomes that much more difficult to engage every student, to know what's going on with them.

Don't get me wrong. Teaching is a fantastic profession and I know I'm talking about the challenges that we are facing here today but it's all about maintaining the quality of service that we have.

You have served under several provincial governments including Premiers Ford, Wynne, McGuinty, Eves and Harris. How is this job action different than the others that you've gone through? (At 7:00 in the video)

I started teaching in 1988 right in the middle of the Harris years and the controversies that were going on. There was a lot of acrimony at that time between the boards because we we were still in local negotiations at that time. My first week of teaching, a week later I was locked out for two weeks. It was a baptism of fire for sure. They were trying to increase our workload to seven classes throughout the year rather than six. In my first semester I actually taught in a change room because there weren't enough classes for the teachers.

We've moved away from that now. We we're getting a lot of support from our administration. From the board. We're getting support from the parents. We're getting support from our students when we talk about these issues. At Cathedral we have students from all across the world. The diversity there is incredible. I was talking to students who say when they come to a classroom of 18 or 20 as compared to their classrooms that were higher... you can actually get to know your teacher. You get to know the other students in the classroom and that makes a huge, huge difference and they understand the issues. They understand the difficulties that would be faced if we return to that model of the teacher-centric classroom with larger class sizes.

And the other thing is the number of courses we're going to lose. At Cathedral we have five fewer teachers this year than we did last year. That's 30 different courses. That's fewer options for students. And at that point you know it limits the students paths through education and it's non-compulsory electives that get hit first. So, music and the arts — the types of courses that really help the kids stay and engage. The compulsory courses get overloaded. So you have 30 people in the compulsory class, 35 people in the compulsory classes and they're not getting the instruction that they could be getting in those core competencies.

Have you been talking to the students about this strike and, if so, what are you saying to them? (At 7:00 in the video)

I'm very careful in the classroom. I don't want to bring my own biases. I'm really interested in hearing what they think about this to represent the issues as clearly and as straightforward as possible. They are telling me in the classroom, 'yes larger classes don't work as well as smaller classes.' They are telling me they see the hard work that teachers do every day in this school. They see how their teachers are coaching. At Cathedral we have a program where we supply food and clothing to families in need in the community. A lot of our students see the work we do. They realize that if classes go up they're not going to see the education they deserve.

I have to say that they are actually destroying our education, not the government. The teachers are hurting us Students by refusing us education on day 2 of the new semester. Obviously as the most biased, liberal media in the country, you won't use this tweet.

What do you say about the concerns raised in this tweet? (At 12:55 in the video)

We're always trying to do everything we can to help our kids prepare for the next step that they're going to take in their education for the next year's classes. We do have a curriculum to cover. That curriculum will be covered. I have lesson plans ready for today. I didn't get to use them. I have to adapt them. This is not an insurmountable problem. We can certainly make sure that everything that needs to be done gets done. But, I think in the long run the damage that will be done to our system would be far worse than one or two days missed here or there. The larger classrooms. The lack of guidance we'll be able to give the students in the long run. That's a far bigger concern for me.
And now I must say to the 15-year-old conservative as well, I appreciate hearing those points of views and I would appreciate hearing them from my students. If he is a grade 10 student, he seems very articulate. I would welcome him in my classroom to raise these concerns directly with me as I would any of my students. That's what we need to do. Whether we agree or disagree this conversation needs to happen.

Wow you actually used it. Very surprising. Thank you for showing another side

One of the solutions being put forward that may address some of your concerns about larger classrooms has to do with online learning. What concerns do you have about online learning? (At 17:27 in the video)

I'll go back to the CBC Ideas program where they were talking about the development of the teenage brain. When you're a young adult you might have the self-regulation and the ability to go online and engage these courses and to move forward. 14 and 15-year-olds, in many cases, just aren't ready for that type of self-regulation to keep them focused on a task when they're online to make sure that they are keeping up an adequate pace and not trying to do everything last minute.

They need the guidance. Blended learning, where they are doing courses online with the teacher in the classroom, there can be a lot of success that way where there's somebody there to respond to the needs of the students in that moment. But the online learning classes where you're just with the computer at home, I don't think most teenagers are ready to engage that fully. Some will be. There are some who can. There are a great number who can't.

What also concerns me as a teacher and as an educator is that this is really a back door to centralization and privatization. I know there was a report that came out that the ministry was considered considering selling these courses once they got them up and running. We know that once profit becomes the motive behind all this they're not going to be trying to meet the needs of the kids. They are going to be trying to maximize that profit and to me it's just not the solution at this point.

What would you say to Minister Lecce if he was here today?

At OECTA we've elected a leadership. These are teachers who are negotiating on our behalf in the best interest of the system and our students. Listen to what these people are saying. Maintain the status quo. Ontario has a great system. It works. We are graduating some of the brightest kids. I am fortunate to be a teacher. It's a privilege to be a teacher. I can engage with wonderfully bright and smart kids every day. We want to maintain what we have. We want to keep this system where it is. We want our students to succeed. We want everybody to do the best they can. We want the status quo. That's really all we're asking for.