With mourners wearing pink as a message against bullying, hundreds of people attended the funeral Saturday of 14-year-old Devan Bracci-Selvey, who was stabbed to death outside his school in Hamilton.

Devan Bracci-Selvey, 14, was stabbed after his mother, saying her son was bullied, came to pick him up

More than 300 people attended a funeral in Hamilton on Saturday for a 14-year-old boy stabbed to death outside of his school.

Devan Bracci-Selvey, 14, was described as a goofy kid with a big heart who would rather sing Life is a Highway than his ABCs, who let his sisters paint his face in makeup, who enjoyed running through the mall playing tag with his best friend, rescuing animals with his mom and hanging out with his grandma.

Those memories were shared by family and friends who packed into Stoney Creek United Church.

"This may sound a little odd, but I want to give you permission today to laugh, because that's what Devan did," said Rev. Cal Stafford in his opening remarks.

Stafford listed three things he asked mourners to take away from how Devan lived his life: his love for his family, friends and animals.

Some mourners were dressed in pink as a statement against bullying — a sentiment heard throughout Hamilton's community all week.

A pink ribbon was also tied to the back of a hearse parked in front of the Stoney Creek United Church, where the funeral took place.

His wooden casket stood was partly covered by a white T-shirt with purple writing that read "Stop Bullying."

'I just wish I got to spend more time with him'

Both of Devan's parents were too emotional to speak at the service, but his sisters read what they had written.

His mother said she will miss his random hugs and "I love yous," and still remembers holding Devan for the first time in the hospital after he was born.

His dad said his son was a dreamer who lived life on his own terms and could walk into any room and brighten it.

"He was a great kid, gone too soon," said his brother TJ Bracci, while fighting tears outside the church. "Today we remember Devan for who he was, a great soul."

Bracci said the two had a good relationship and Devan always looked to him "to protect him.

"I wish I could have done more." 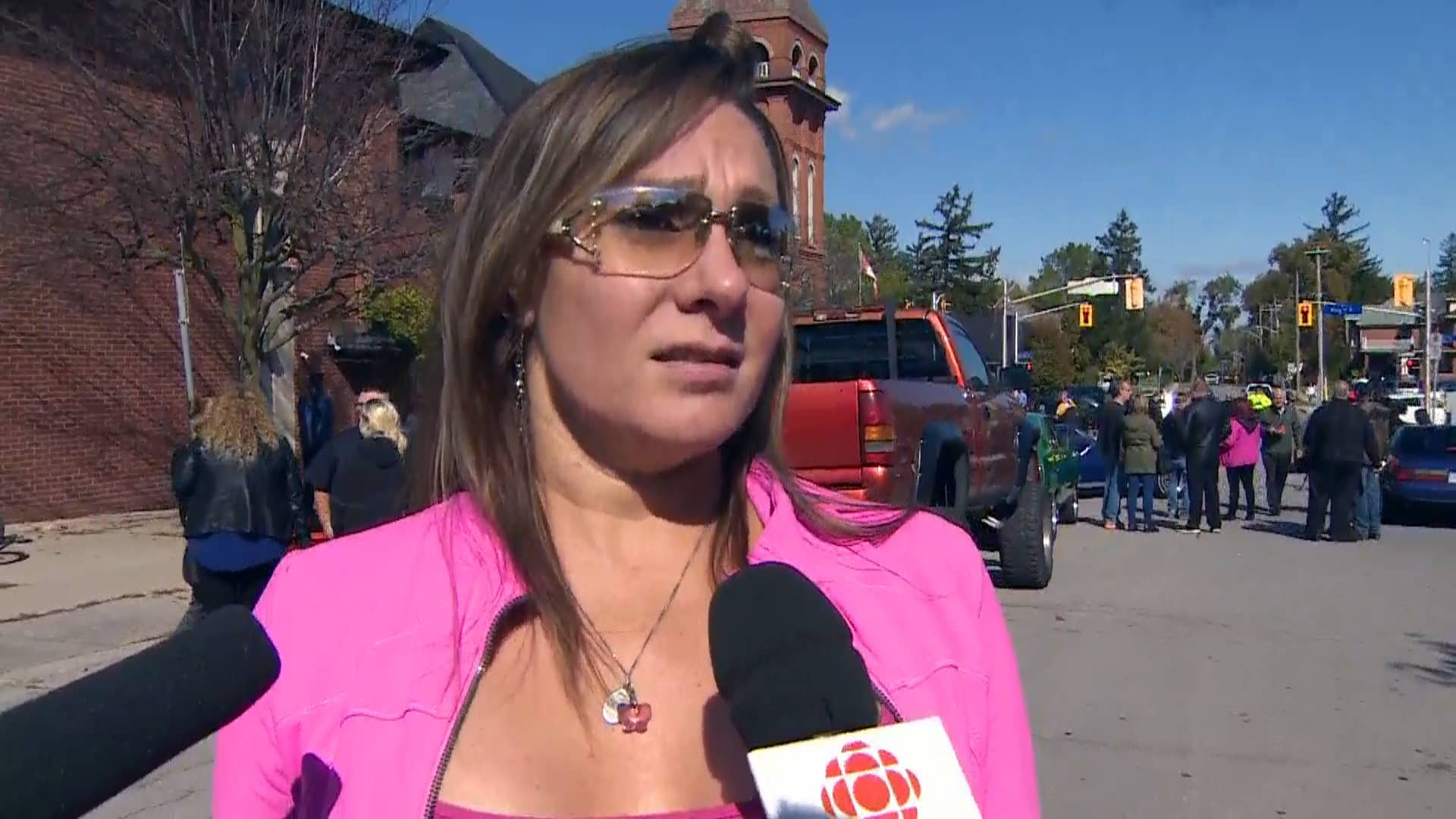 1 year ago
1:25
Funeral for slain 14-year-old held in Hamilton on Saturday, with many mourners wearing pink to symbolize anti-bullying. 1:25

He was attacked in front of his mother, Shari-Ann Bracci-Selvey, who had gone to the school to pick him up after he called her to say some children were bothering him.

"He only had a small circle of trust, and if you were in that circle, he would defend you like a family member. He would be like a lioness protecting her cub," said his best friend, Michael Mcemtee, known to Devan's family as Mikey.

"I just wish I got to spend more time with him."

Outside the church Saturday, about 60 vintage cars lined the street with pink ribbons. After the funeral, they drove in procession through the city in tribute the teen, who was an aspiring mechanic with a passion for classic cars.

The funeral was open to the public, but television cameras were not allowed inside.

A visitation was held on Friday.

Devan Bracci-Selvey’s family and friends look on as dozens of classic cars drive by in a procession to the cemetery <a href="https://t.co/XMaHOtTG72">pic.twitter.com/XMaHOtTG72</a>

Bracci-Selvey said her son had been bullied since the second day of school this year. Tormentors allegedly stole his bike.

"For a month, we've been trying to get this dealt with," she said, adding one student had been suspended, but still showed up at school on Monday.

"All schools have the same policies, zero tolerance and zero bullying, and everyone belongs. And it's not true, and no one is held accountable for it, and then stuff like this happens."

In a statement to CBC News, Manny Figueiredo, education director of the Hamilton-Wentworth District School Board, confirmed Devan's mom reported several bullying incidents to school administrators and that the board would be handing that information over to police.

He would not provide any details about the school's response, but said school board officials are co-operating with the police investigation.

Figueiredo said the board is focusing on supporting students and staff by bringing in social workers, a crisis response team and police liaison officers to walk the school halls.

Anti-bullying messages and symbols as people gather to mourn the death of 14-year-old Devan Bracci-Selvey. <a href="https://t.co/mXBITNFtD4">pic.twitter.com/mXBITNFtD4</a>

Police said they're aware of the incident involving the bike, but there's currently no information linking the accused in the stabbing to the bike theft.

Investigators were initially hesitant to confirm whether the bullying and the attack were directly connected. On Wednesday,  Det.-Sgt. Steve Bereziuk said the bullying aspect of the investigation is "growing."

"We are going to continue to probe the bullying concerns," he said.

Two teens — a 14-year-old boy and an 18-year-old man — have been charged with first-degree murder.

The hearse has arrived for the funeral of Devan-Bracci Selvey, with dozens of classic cars lined up to honour the 14-year-old who loved cars and wanted to be a mechanic <a href="https://t.co/CPwR3mcziQ">pic.twitter.com/CPwR3mcziQ</a>

Neither can be named due to a publication ban shielding the man's identity and provisions of the Youth Criminal Justice Act that protect the boys.

Hamilton police have been relatively quiet on the circumstances surrounding the teens death, but Bereziuk has said investigators believe the 14-year-old accused was the one wielding the knife.

He has also alleged there was "some element of pre-planning and premeditation."

Others bullied in Hamilton schools

Trudie Nicholls-Drakerm, who lives in the same areas as Devan's family, attended the funeral to show her support.

"She was bullied by gangs of girls, rumours, ostracised," said Nicholls-Decker. "One time she and a teacher were in the school gym, a girl ran into the gym and cold-clocked my daughter right in the face, gave her a black eye and ran out again."

She said the police were called, but her daughter felt pressured not to press charges.

"It was boiled down to two girls in a fight, but it was assault. She was punched right in the face in front of a teacher."

Nicholls-Draker said the other girl involved was suspended for a couple of days, but there should be other ways the school board could handle incidents such as these.

"There have to be stricter regulations and rules. Maybe the kids that would have just gotten a suspension, maybe they need to go through some kind of therapeutic training for three days instead of three days at home."

Mourner Sarah Castelleni said she has made some 5,000 T-shirts with the slogan, "Love is louder, stand up to bullying," and all proceeds will go to the family.

"I have kids who are in school that will eventually be going to high school," said Castelleni. "It scares me that this has happened. It's pretty sad that it's taken a boy dying to make it come to light."

She said her 11-year-old son, who's in Grade 6 at R L Hyslop Elementary School in Stoney Creek, has been bullied.

"He has ADHD and people would pick on him because he's louder than most...people were calling him a loser because of that," she said. "It hurts him."

William Williamson, 20, who now lives in Hamilton, said he was bullied so badly that he dropped out of high school.

"It's upset me very much," he said. "I know what the family is going through."

"I've been through the exact same thing [as Devan]," he said. "The kids bullied me, calling me names and pushing me around. I told the principal, the teachers, and they didn't do anything."

He said his mom also spoke to the school, but again nothing happened.

Williamson said he's now being home-schooled so he can finish his Grade 10, 11 and 12 classes, and graduate.