Kindergarten students usually start school in a class full of toys and other kids, but for some during the COVID-19 pandemic, their very first encounter with the education system will be from home, through a computer screen.

Christina Hayes never thought her child's very first class in school would occur without a classroom.

Her daughter doesn't walk to school with a backpack on, sit in a class full of other kids in junior kindergarten where they can play and learn together all day — instead, she's learning online.

When she rolls out of bed, she's already in school. The family living room is now her classroom.

"That social interaction, that's definitely something she's not getting with online classes. There's only been a few times they've all been allowed to have their microphones on at the same time," Hayes said.

"Online learning comes with those limitations."

With COVID-19 cases appearing in schools, some families have been reluctant to have their children in class. The pandemic has also transformed how classes function, especially at the kindergarten level.

Online schools try to imitate reality before COVID-19, but can't duplicate it.

Most kids wear masks. Instead of huddling together on a rug, children are spaced out in chairs or individual pieces of carpet. They can't touch each other or get too close to teachers and early childhood educators — even when they're outside. They also can't play with plush toys.

But some kids won't even get that much if they learn online. They won't sit in a real desk in a real classroom. Recess will merely be time in the backyard or down the street or in another room in the house. They won't be away from their parents throughout the day to gain independence. And if they manage to make their very first school friends, it'll be through a screen.

Susan Prentice, a sociology professor at the University of Manitoba, believes the potential effects of online on kids so young are "disconcerting."

"The job of young children is to learn through play ... it's a tremendous loss for most children that virtual learning by screens is the way they'll be introduced to school," she said.

"Everybody is trying to do the best they can ... but it is unquestionably going to be a diminished experience for children."

At least 2,300 Hamilton kindergarten students are learning through a screen. Many other students in the public board switched from in-person to online learning, causing delays in the start of classes (some of which are only just starting).

Natalie Crisante, the early years student achievement consultant for Hamilton-Wentworth Catholic District School Board, said virtual schooling has been a challenge but also an opportunity to use technology "in a way we've never had to before."

INTERACTIVE | Use this map to find Hamilton's high priority schools

Crisante said local school boards put kindergarteners into groups if they're learning online, where they can learn together, in the context of relationships. That's called synchronous learning.

Then, there's asynchronous learning. During these times, kids may be assigned to do something off screen to "keep the integrity of the play" and relationships with families. They would play with toys, parents or with whatever is outside. The goal is to help kids learn and become more independent without a screen and other students.

Bill Torrens, Hamilton-Wentworth District School Board's superintendent of student achievement and programs, said the public board may provide learning materials like books or art supplies to students who need them.

So far, Hayes said teachers have been creative.

"We had YouTube videos we could watch on our own time to do yoga and dancing and movement that is difficult to do all together in an online class," Hayes said. 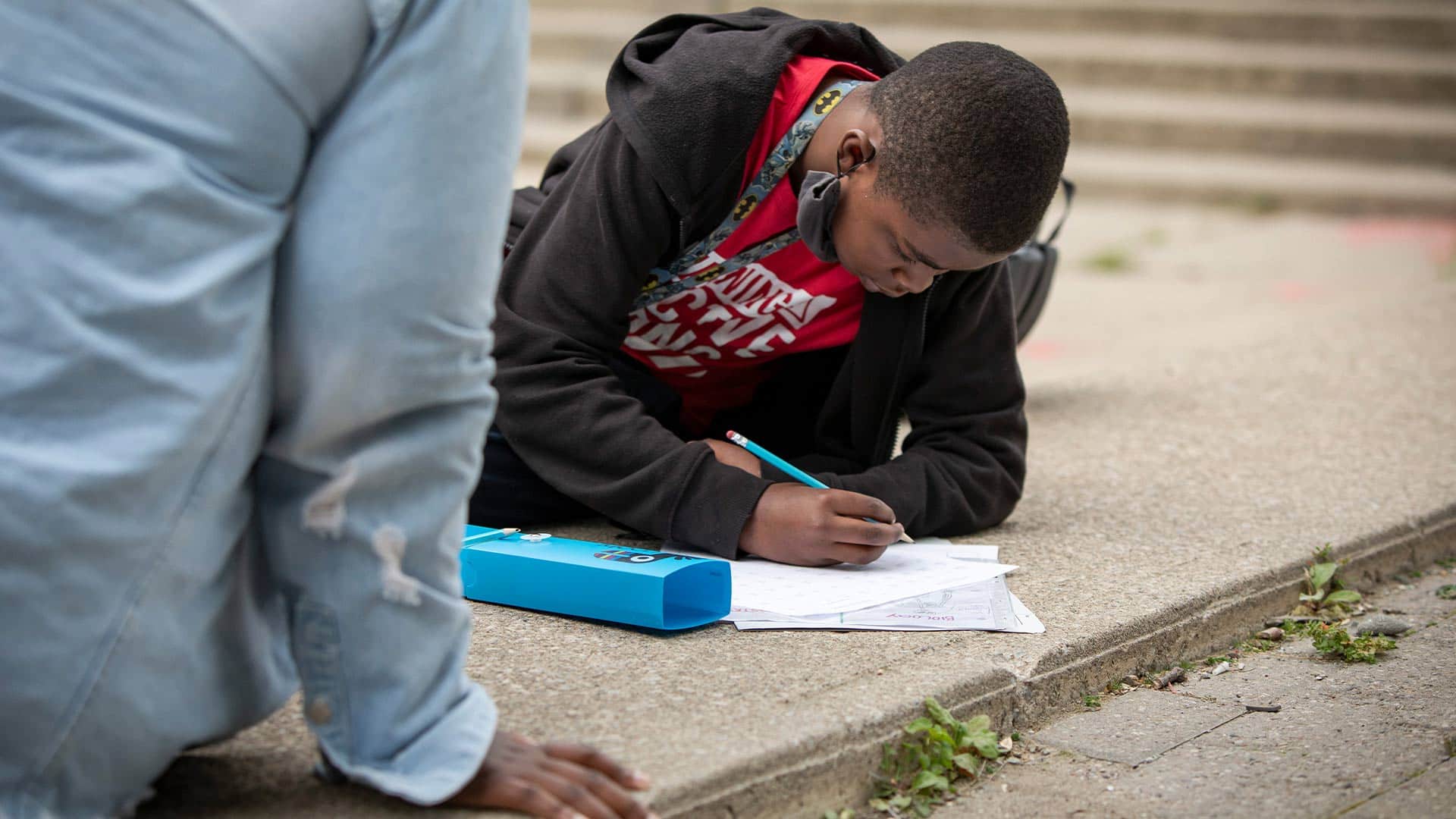 1 month ago
2:01
Many Ontario schools are struggling to accommodate the surge in requests for virtual learning. 2:01

Some of the other activities for kids include reading together and small group lessons, many of which are spread out by breaks.

Without breaks, it can be challenging for the first-time students.

"The largest issue we've had is her focusing ... it's difficult for her teachers to tell when she's not focused," Hayes said.

"If they were in person the teacher would be able to see and prompt her to focus whereas now I try to keep an eye on that sort of thing."

And there's also a lack of the same kind of social interaction kids share face-to-face in a classroom or on the playground.

Crisante, of the Catholic board, acknowledged the challenge of building relationships through a virtual, two-dimensional screen. The start of the year has more whole class group activities but as the year progresses, educators will use small groups to get the kids to work with each other. That could help with the socialization aspect.

"We expected the worst and we're surprised by how well it has gone," she said.

Torrens said online learning will also be a chance to see what kind of impact not being in a formal school has on a child in the future.

Prentice, the sociology professor at the University of Manitoba, thinks developmental psychologists will be watching very closely to see how it affects kids.

While Torrens understands society has a "general concern in society around our children and screen time," he and Crisante expressed confidence in educators and their ability to mix on-and-off-screen learning throughout the day.

But Prentice also said the reliance on parents to help with kindergarten students learning online puts them in a "terrible dilemma." Some may have to balance their child's education with their job, their own education or other obligations. It may also have a disproportionate affect on women, who often tend to stay home with the kids.

Crisante said there are some things a child could do alone but "the expectation is parents are going to be a big part" of kid's learning. Despite that, she emphasized online learning may actually help develop a student's independence.

While Hayes has had to be fairly involved in her child's learning, it hasn't been overwhelming so far, but she hasn't had to balance it with work.

Prentice said ultimately it is important to flatten the COVID-19 curve and understands school boards are doing their best even with challenges like budget constraints.

Technology is the future of education

One advantage to online learning, according to Crisante, is introducing kids to a world of technology.

"We know technology is driving this generation, so teaching them at the same time the responsibility and value in technology but the use of technology and how it has its place but that it isn't everything. That's made it really unique," she said.

Torrens said it may also set a precedent for the future of learning and education. In many ways, it's an experiment.

"Fourteen years from now, these kids will be graduating, so what does 2034 look like for their learning and how do we need to get them ready for 2034 if they're starting in a remote or virtual learning space in 2020?"