The restaurant where Ontario MPP Sam Oosterhoff posed for a photo with a large group of people who weren't wearing masks says the diners didn't follow its COVID-19 rules despite reminders from staff.

The restaurant where Ontario MPP Sam Oosterhoff posed for a photo with a large group of people who weren't wearing masks says the diners didn't follow its COVID-19 rules despite reminders from staff.

Betty's Restaurant in Niagara Falls, Ont., wrote on Facebook this week that staff had to tell the group "several times" to wear masks when not seated at their tables.

"Unfortunately they chose not to follow posted rules about wearing masks and distancing," the restaurant said in the statement.

"We can remind guests but we cannot strong-arm them into following rules."

The Niagara West MPP — who posted a series of photos on social media showing a group of around 40 people squeezed together — has apologized for not wearing a mask. He didn't respond to a request for comment Tuesday about the restaurant's statement.

Owner Joe Miszk said he also received a private apology from the group, which he appreciates.

Despite the attention — media outlets have been calling Miszk, and the restaurant is fielding negative comments —  Miszk said he's satisfied with an apology because he keeps the situation in perspective.

Miszk lost his daughter, Julianne, to cancer about three months ago.

He described her as a passionate para-athlete who excelled at running and competed at the Special Olympics. She was a seven-time provincial champion and was inducted into the Niagara Sports Wall of Fame.

"These are challenging times for everybody, and we want to all do our best to do the right thing. And it's health first, safety first … and sometimes we have to recognize that sometimes we don't always get it all right," he said.

"People do make mistakes sometimes and it's important to be able to recognize that."

Miszk said he saw how supportive a community can be with his daughter. But sometimes, he said, you go through things and see the other side.

He says he understands that the group made a mistake. When it comes to the business, you address the situation, he said, and "we move on."

In its statement, the family restaurant said Oosterhoff's group was in a private room — with a separate entrance and restrooms — and didn't interact with other customers.

The restaurant has sanitized and disinfected the "entire area since the party," and says it is doing its best to follow all the guidelines in place for people's safety. It also thanked members of the community who continue to support them since.

Miszk said he was proud of the way his staff handled the situation.

Ford said on Monday Oosterhoff would keep his position and that "everyone makes mistakes."

Ford has described people not wearing masks at parties as "jokers" and said "you'd think the cheese slipped off the cracker with these people." 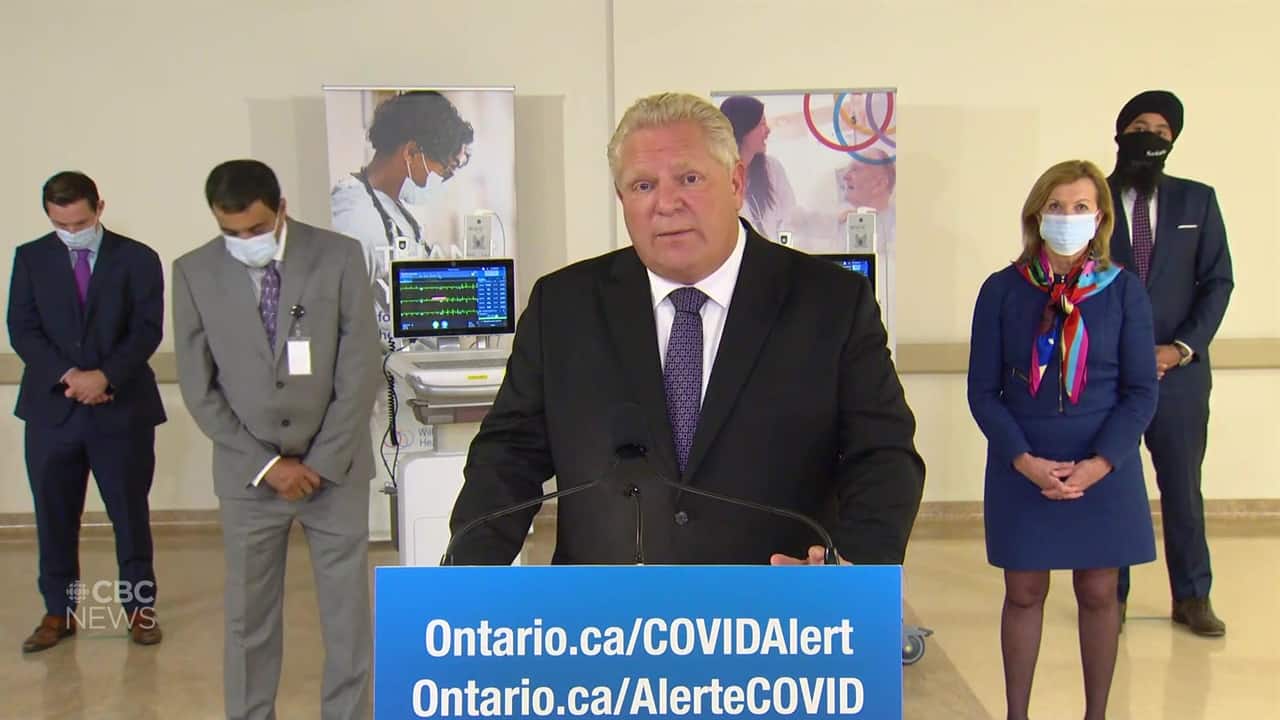 'We all make mistakes,' Ford says after MPP Sam Oosterhoff pictured at gathering without masks

28 days agoVideo
1:07
Premier Doug Ford has dubbed those who don't wear masks everything from "yahoos" to "jokers" to "a few fries short of a Happy Meal." But he says he accepts the apology of an MPP Sam Oosterhoff, who was photographed in a group without masks. 1:07

In his apology, Oosterhoff said there were fewer than 50 people at the indoor gathering, in keeping with Ontario's COVID-19 regulations for staffed events.

People are required to wear masks inside restaurants when they aren't eating or drinking, and must stay two metres away from those outside their household.

Christine Rankin is a reporter/editor with CBC News, and an associate producer at CBC Sports. You can find her on twitter at @ChrisRankinNews, or send her a message at christine.rankin@cbc.ca.