How politicians can use new language software to manipulate voters

The CBC's technology columnist Jesse Hirsh talks about a new tool that could help politicians make you like them more and hate their opponents.

What if doctors could use the software to figure out the best way to tell you to eat better? 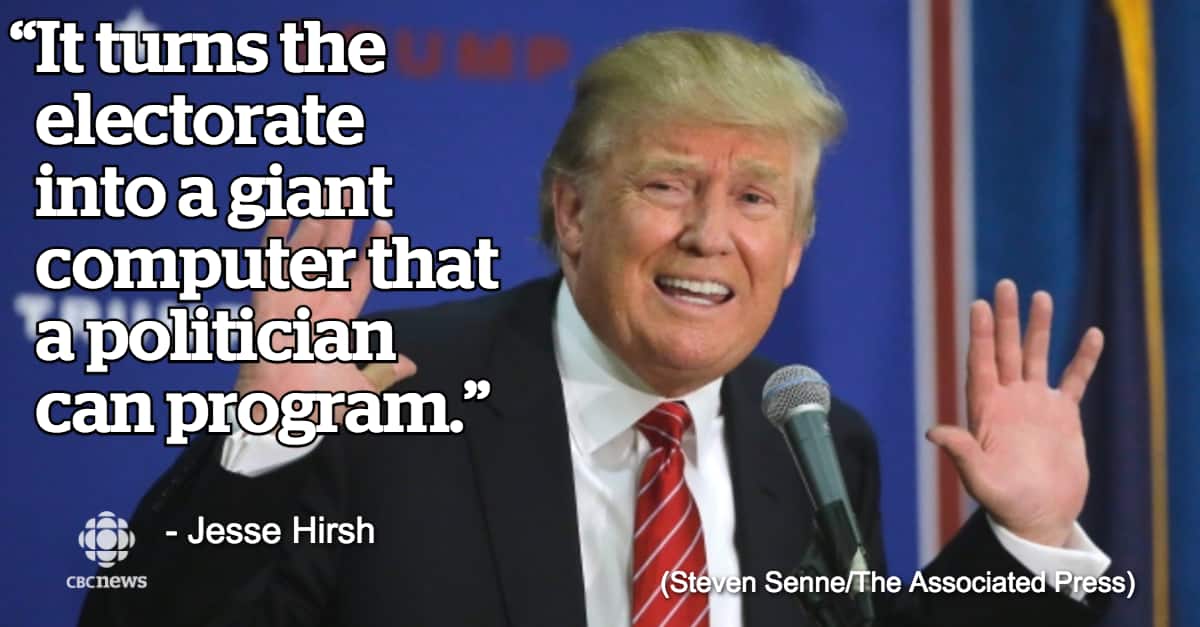 The CBC's technology columnist Jesse Hirsh talks about a new tool that could help politicians make you like them more and hate their opponents.

It has been developed by a researcher at Northeastern University in Boston and could help politicians perfect the message they want like-minded voters to hear. It hasn't hit the campaign trails yet, but Hirsch says it sound a lot like Donald Trump's message to his voters.

The CBC's Conrad Collaco spoke with Hirsh about this new technology and what it means for democracy in North America. Below, read an abridged and edited transcript of the interview with Hirsh. Listen to the full interview by clicking the image at the top of this page.

Q: How does this software work?

It tries to automate public opinion polling research and the way content can be optimized for an audience. It was developed by a political scientist named Nick Beauchamp in Boston.

He's interested in how political opinions form and change. He created software by using Obamacare as a test bed. It took the language around Obamacare to find the best phrases that might improve what the listener thinks about Obamacare. This would become a method that could be applied to any issue or candidate.

It's a combination of machine learning and automated text analysis which is the way of figuring out the best possible words to apply to the political arena.

Q: Does this work no matter what your place is on the political spectrum?

Yes. It's designed the way public opinion polling was conceived, as a way to understand the preferences of the public. But, this goes one step further. It optimizes words to cater to what people want and make it more likely the voter will vote for you.

Q: Is this technology good for democracy?

You could argue that it would make it more efficient. It would allow politicians to more efficiently communicate with their electorate, but it is more likely that politics would become more superficial. As it stands, I think a lot of political debates lack substance. Instead, there is a focus on personality.

This would exacerbate that. Rather than politicians saying what they feel their message is, they would be focused on what the electorate wants to say.

It would change the politician's relationship to the electorate as well. It would treat voters as if they were a database that can be programmed. It turns democracy into more of a machine than a deliberate process. It almost removes substance.

It's part of why, when you look at a candidate like Donald Trump and wonder why he says all those ridiculous things, it's because he has data on a particular subset of the Republican party. He knows how they will react to certain messages delivered in a certain way.

The rest of us scratch our head because it doesn't make sense but it does speak to the role that data and smart software is playing when it comes to creating the script, writing the words, authoring the Tweets these politicians should be saying to get the greatest success.

Q: How would this change campaigning?

It's a kind of feedback loop. They can speak to their base and understand exactly how their base reacts. It can galvanize them to ignore their opponents, to ignore anyone who is not already a supporter. It allows parties to measure what works and then the next time double down on those words.

That creates a reinforced effect of becoming even more sensational, even more insular, because you don't care about your opponents or people who don't vote for you. Instead, it's about beating that tribal drum to get your base as worked up as possible.

It turns the electorate into a giant computer that a politician can program.

Q: How can this be used outside of politics?

The commercial application is already being carried out. A company called Persado is in the business of the automation of persuasion. They test out different words, different phrases, different combinations of sentences to see which is the most persuasive.

They take a subject matter, say selling cars. They take all the words that can be used to describe selling cars and through automation they can test out every possible combination until you find the words best designed to sell that car. This is already happening.

Imagine health care. Imagine if your doctor could use automated software to encourage you to change your behaviour. What if they could use the software before your appointment to figure out the best way to tell you to eat better?

That's another example of how this software could find an application but also be used to manipulate people.