Diagnosed with an aggressive form of blood cancer, and with days to live, 55-year-old Stephanie McManus makes a last wish: "I want to see my horse."

55-year old-woman says goodbye in hospital to her soulmate, Luna 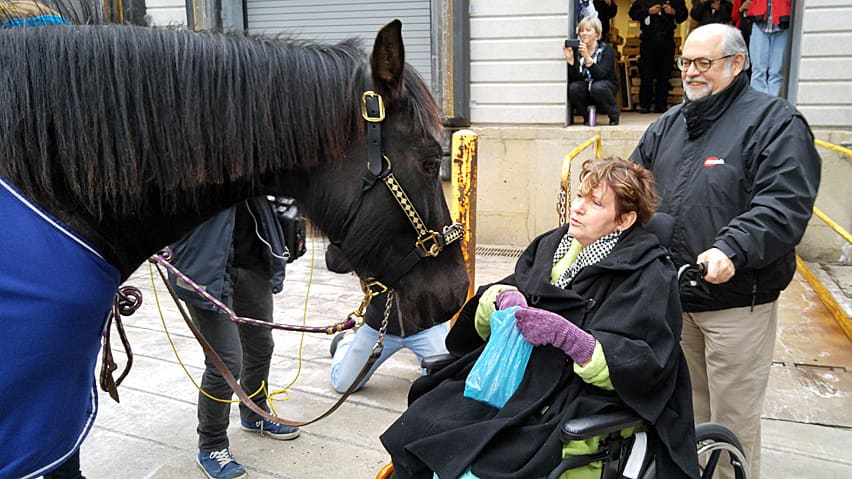 Saying goodbye to a friend

Update: McManus passed away on Thursday morning just after 5 a.m. An updated story is available here.

Stephanie McManus, who is dying from an aggressive form of blood cancer, had one final wish: To see her horse, Luna.

With her family and close friends by her side, members of Juravinski Hospital in Hamilton and media watched as a team brought a majestic horse off a trailer to make the Milton, Ont., resident's dying wish come true.

"It was unbelievable to see her," said McManus, after she was taken outside in her wheelchair for the reunion. "I never expected it to happen … it was truly something."

McManus was diagnosed with multiple myeloma in September 2013.

"Essentially, it destroys her red blood cells and blood platelets, and makes her bones excruciatingly painful," said her partner, Marc Stevens. In the best-case scenario, she had five to seven years to live.

A securities lawyer the last 20 years, McManus decided to have a stem cell transplant in February 2014. She went into remission for 14 months.  In June 2015, she had a relapse.

McManus continued to work, running two companies — Comprehensive Support Services and Organics Live, an organic food delivery service. She moved into a home with her partner and in August 2015, and bought her fourth horse, Luna.

'She brought out the spirit in me'

After the reunion Wednesday, McManus was back in her hospital room, tired and pumped full of medication to ease her pain. Still, she was composed, positive and cracking the occasional joke.

With her eyes filled with tears and face etched with emotion, McManus said saying goodbye was peaceful and serene. "I think she understood I was dying. She did. She was very kind about it. She understood it and was meaningfully gentle about it."

In pain and unable to walk, McManus was taken to Juravinski Hospital on Saturday and is in palliative care. On Monday, she met with her specialist, who said she had one to three days to live. That prognosis inspired the wish to see her horse, her "soulmate."

When something presents itself in your lap, you take it.- Stephanie McManus

Enter Zachary's Paws for Healing, an organization created by Zachary Noble, in partnership with Juravinski Hospital, before he died.

In the fall, a year after Noble died, the first pet visit took place. Since then, "they're constant visits," said founder Donna Jenkins. "I've lost count."

The visit between Luna and McManus has "never happened before … first time that we know of in Canada," she said.  "Juravinski hospital is the first hospital in Canada to provide such a formal, organized program."

The program is free to anyone who requests it and runs entirely through fundraising and sponsorship.

When McManus learned her wish would be granted, it was "just mind blowing," she said. "When something presents itself in your lap, you take it."

Having accepted her fate, having said goodbye to her horse, McManus will continue to visit with family and friends for as long as her body will allow her.

The message she leaves: "When they're struggling and tired and beaten up, think back on what I might have thought or did and hope that helps guide them."