Anthony Yorfido, a 23-year-old man with Down syndrome from Welland, Ont., ended up rocking on stage with Aerosmith's frontman Steven Tyler after a fluke encounter while out shopping with his mother.

From shopping for pantyhose with his mom, to rocking out on stage with famous frontman 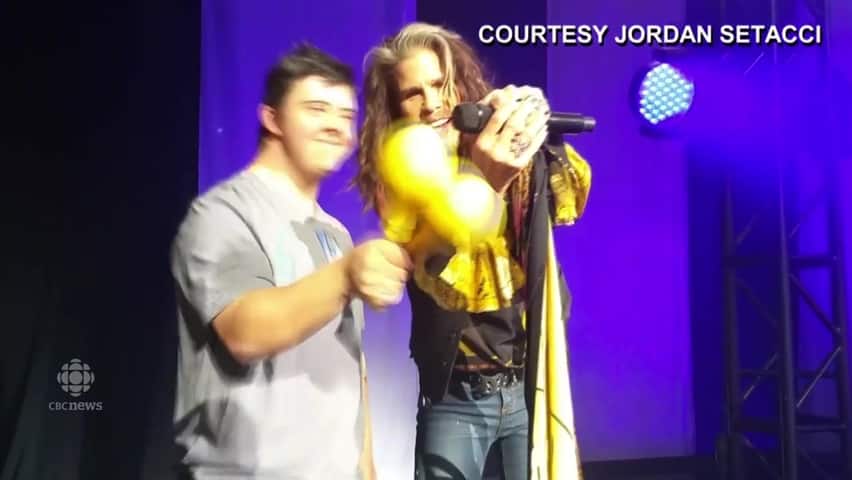 5 years ago
0:53
Anthony Yorfido, a 23-year-old man with Down syndrome from Welland, Ont., ended up rocking on stage with the Aerosmith front man after a fluke encounter while out shopping with his mother. 0:53

A shopping trip to go buy pantyhose with his mother turned into a "fluke dream come true" for a 23-year-old mega-fan from Welland, Ont., after a chance encounter with the lead singer of Aerosmith.

Anthony Yorfido, who has Down syndrome, unsuccessfully tried getting tickets for a pair of sold-out Steven Tyler solo shows at the Fallsview Casino in Niagara Falls this past week.

But his luck changed when Yorfido and his mother, Diane, happened to bump into the rock star last Thursday while shopping at a medical supplies store in Niagara Falls.

"I was picking up my pantyhose and I saw a stretch limo outside… I went in and Steven Tyler was leaned over on the counter and he had a couple ladies with him," Diane Yorfido told CBC News.

"Anthony was standing behind me … [and] he just said, 'Oh my god.' He went nuts. He goes, 'Is that Steven Tyler?' Like he totally knows him because he loves Aerosmith, he loves Steven Tyler. He listens to his music all the time."

"I knew it was him because I saw the back of him. I saw the limo outside. I knew. I saw his ponytail."

The two hugged and posed for photos. They say the singer was at the store picking up a back brace. When Tyler found out the family couldn't get tickets, he offered them backstage passes to that night's show.

Diane Yorfido had to work, so Anthony ended up going to Thursday's show with his dance instructor, Jordan Setacci. The two got to watch from the side of the stage.

As Tyler kicked off his set with the Aerosmith tune Sweet Emotion, he invited the 23-year-old on stage with him to rock out with a pair of yellow shakers.

Tyler held the mic to Yorfido's shaker, before yelling out "Anthony in the house" and continuing with the song.

"I was shocked. I didn't know I was going on stage," Anthony Yorfido told CBC News. "I was really, really excited to meet him. It was my dream come true."

A video of their impromptu performance has been posted online and Yorfido's story has since gone viral. He says his friends and family are "going nuts" over it all.

Tyler has been known to surprise his Canadian fans. Last summer, he played Dream On in a Kelowna, B.C., park using one of the city's free outdoor pianos. A week later, he mingled some newlyweds in Edmonton.

The Yorfido family has been keeping in touch with Tyler's crew since Thursday, sending them photos of the meeting and performance via text message.

Diane Yorfido says she hopes they can remain in contact with the lead singer and perhaps meet him again sometime soon.

She says she and her son are still in disbelief.

"What a wonderful, wonderful man."