Hamilton police are reviewing a video posted to Facebook that appears to show an officer pulling a man and his motorcycle to the ground. 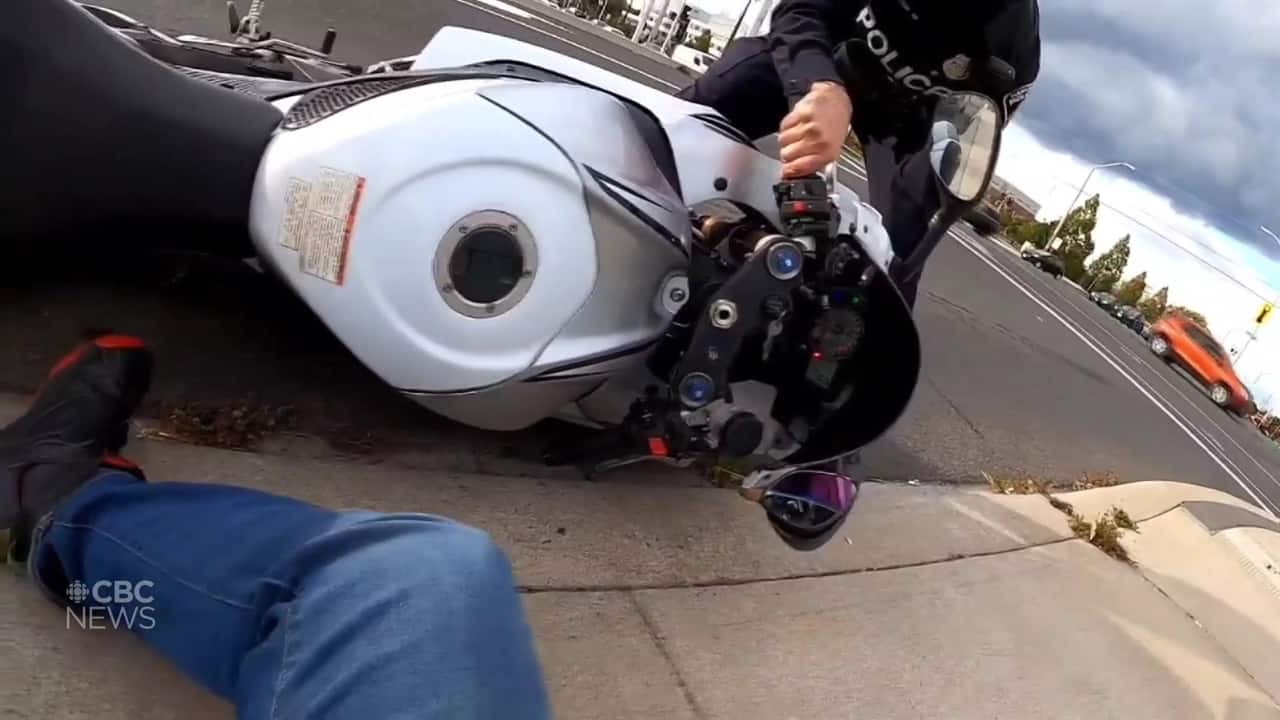 20 days agoVideo
6:55
Hamilton police are reviewing a video posted to Facebook that appears to show an officer pushing a man and his motorcycle to the ground. 6:55

Hamilton police are reviewing a video posted to Facebook that appears to show an officer pulling a man off his motorcycle without much warning.

Kyle Wilde, who declined multiple interview requests as he seeks legal counsel, shared the almost seven-minute video last week, writing "[a] cop throws me off my bike for no reason."

The video — which has been edited — appears to be recorded from a camera on Wilde's helmet. It's unclear what happened before or after what is shown in the video. It is shot in November, but it's unclear what day.

It begins at the intersection of West 5th Street and Fennell Avenue West. Wilde is sitting on his Suzuki GSX-R1000 motorcycle at a red light behind a black Lexus RX250. His right turn signal is blinking.

In the video, a left-side mirror shows a uniform police officer behind Wilde running up to the motorcycle.

His police car isn't directly behind Wilde, behind instead, another vehicle.

The officer, still running, moves to the right side of the bike and appears to pull Wilde off his seat.

"Get off the bicycle," says the officer, as he pulls Wilde without warning.

The motorcycle and Wilde both tumble onto the sidewalk.

"No lights or siren, didn't even identify himself as a police officer," he wrote in a comment.

The officer appeared to order Wilde to put his hands behind his back and handcuffs him.

The officer returned after Wilde had been on the ground for roughly 15 seconds and pulled him up to a seated position on the sidewalk.

A pedestrian left his car and asked the officer if he could help. The officer spoke with the pedestrian and then attempted to lift the motorcycle off the ground. He tugged once, unsuccessfully.

"You probably already f---ed it up from slamming it into the ground ... I don't know man." Wilde said.

The officer then asked Wilde if he had a driver's licence on him. WIlde said he did.

The pedestrian helped the officer pick up the motorcycle.

After roughly two-and-a-half minutes on the ground, Wilde stood up.

"I would've pulled over," Wilde said in the video.

"Normally we would [pull you over]," the officer said.

"When guys hide the f---ing licence plate, they don't pull over, they take off ... they do like you do, they tuck it behind the fender, I've had guys where they put magnets [to hold the plate] ... they put stolen plates on there," he said.

As the officer checked Wilde's plate, Wilde noticed some damage to his motorcycle

"You didn't have to throw me off the bike," he said to the officer.

"I didn't try to throw you, I tried to hold you." the officer said.

The video then jumped to the officer on the phone explaining the incident. On the call, he said he saw a motorcycle drive by and wasn't sure if it had a licence plate.

"I grabbed him off the bike, the bike fell," he said in the phone call.

The video then jumps to a different scene.

"Well, I've got to make this right, so what can you do?" the officer said.

"I don't know, you tell me, I've never had a situation like this," Wilde said.

"Generally, you pick it up and drive off."

The video cuts to a different point in the conversation.

Hamilton police didn't discuss the details of the incident, but said it became aware of the video through social media and is investigating what took place.

Jackie Penman, the service's corporate communicator said the investigation must be completed within six months as per the Police Service Act.

"An investigation will determine whether an allegation of misconduct has been substantiated. Investigations could include speaking to witnesses and gathering evidence," she wrote in an email.

She said several outcomes can come from the review.

On Tuesday, she added that police won't answer any more questions about the video while it is under review.

She would not confirm the identity of the officer in the video after multiple requests by CBC News.