Number of Canadians who say they are middle-class takes steep drop: Ekos poll

A recent poll conducted by Ekos Research for The Canadian Press suggests fewer than half of all Canadians now identify as members of the middle class -- a steep drop from nearly 70 per cent in 2002.

Computer programmer David Galvin should be the quintessential beneficiary of next week's federal budget, which is expected to continue the Liberals' persistent rhetoric and focus on bolstering the middle class.

He is educated, has had a career in advanced technology and lives in the economic heartland of southern Ontario.

But Galvin no longer includes himself in the middle class.

Like a growing number of Canadians, the 65-year-old from Hamilton says he has fallen behind — and that's a challenge, experts say, to Prime Minister Justin Trudeau's approach to fiscal policy.

All you have to do is walk around downtown Hamilton to see what the effects of poverty and low-income work are.- Computer programmer David Galvin

A recent poll conducted by Ekos Research for The Canadian Press suggests fewer than half of all Canadians now identify as members of the middle class — a steep drop from nearly 70 per cent in 2002.

In Galvin's hometown of Hamilton, 22 per cent said they've fallen behind in their social class in the last five years. That was the highest concentration in the country, tied with Halifax and Kitchener.

Another 55 per cent of Hamilton respondents said their situations haven't improved over the last five years.

Middle-class dream has been 'shattered'

Ekos president Frank Graves said the numbers point to a large shift in what it means to be a member of the middle class in Canada.

"The whole notion of a middle-class dream — 'I work hard, build a better mousetrap, do better than my parents, my kids do better than me, I get a house, a car, retire in comfort' — that has all been shattered," said Graves.

"A lot of people are stagnating or falling behind and they're not happy," he said. 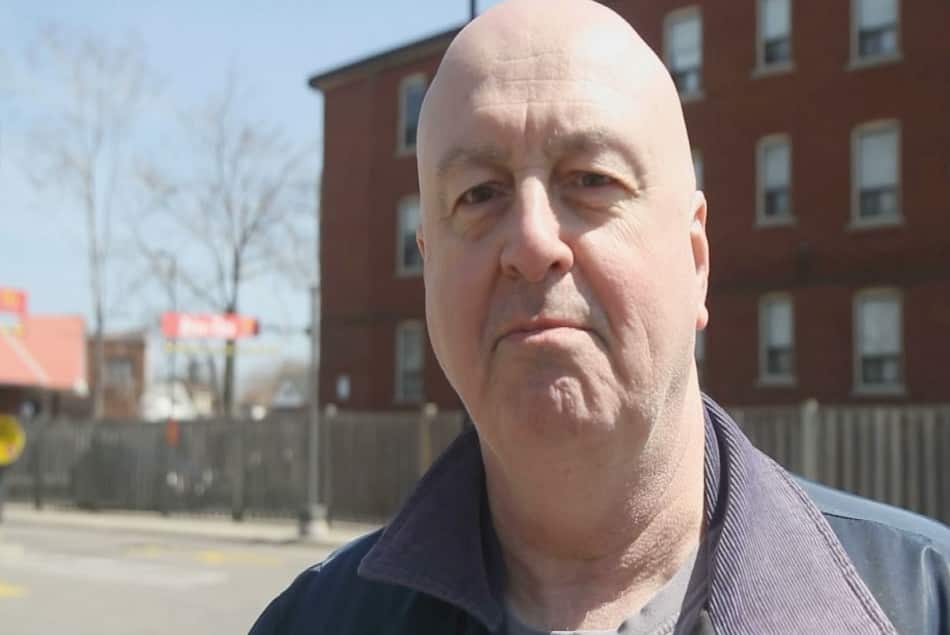 Why a hike in the minimum wage would be life-changing for David Galvin.

5 years agoVideo
0:39
Some people in the province are pushing the government to hike the minimum wage to $15/hr. David Galvin explains how that would change his life. 0:39

While the Liberals have covered their bases by expanding their appeals to the middle class to include "those working hard to join it," Canadians like Galvin have no such aspirations.

He has two bachelor's degrees from the University of Guelph and spent most of his career working in his field. However, after he lost his job more than a decade and a half ago, he has struggled to make ends meet.

"I was unable to get meaningful middle-class work again and ended up doing a lot of contract and short-term work," said Galvin.

Hamilton man has 2 bachelor's degrees, is working as a security guard

The loss of his wife, Norma, in 2002 and a worsening gambling addiction only made things worse.

"I don't really see myself as a middle-class person," said Galvin. "I've had many years of precarious employment and it's been a long time since I actually had a professional, middle-class type of job."

Despite now having full-time work as a security guard and receiving Canada Pension Plan benefits and Old Age Security, Galvin still worries about the future.

Many in his community and across the country share that uncertainty, according to Sara Mayo, a social planner at Hamilton's Social Planning and Research Council.

"People feel like they are working harder and not getting ahead," she said. "That is seen across Canada and certainly in Hamilton as well."

One possible solution to the growing problem, said Mayo, is for the federal government to speed up its funding for the National Housing Strategy, a 10-year, $40-billion initiative to provide more affordable housing to lower-income families.

Most of that $40 billion, split between federal and provincial investments, won't start rolling into communities until after 2020. Mayo said communities need more of that funding now to address a growing housing crisis and the mayors of Canada's biggest cities agree.

Last Thursday, the Federation of Canadian Municipalities big-city mayors caucus met Finance Minister Bill Morneau to ask him to speed up the flow of cash.

Edmonton mayor Don Iveson said the money is needed faster so that cities can focus on repairing hundreds of thousands of affordable housing units as soon as possible.

"There are units that are not ... habitable right now because they've been waiting so long for that investment and we'd like to get those back in the hands of Canadians who need them and create the jobs now, not in a year or two," Iveson told a news conference Thursday.

"All you have to do is walk around downtown Hamilton to see what the effects of poverty and low-income work are."