Holly went missing on Jan. 11, her body was found in Hamilton's harbour Thursday. Her family still has so many unanswered questions about what happened and why.

Holly went missing on Jan. 11, her body was found in Hamilton's harbour Thursday

The search for Holly Ellsworth-Clark is over, but the heartbreak her family endured searching for her since January continues.

For her father, Dave Clark, agony is mixed with outrage hearing that police think the 27-year-old's death likely doesn't include foul play or anything suspicious in nature.

"We've been tortured by this for eight months, we're kind of used to feeling bad," Dave Clark, Holly's father told CBC from Calgary, where she grew up.

"We're just really, really broken up it went this way because we had been hopeful she was alive and that she just needed some kind of help. Anyway, we suspected she was dead a long time ago."

On Tuesday, Holly's body was found in Hamilton Harbour. She went missing from her Hamilton apartment on Jan. 11.

Holly's family arrived from Calgary the next day, leading hundreds of volunteers who helped look for her in Hamilton and tape posters to poles and buildings across the province.

But it appears her remains have been in the water for a while and were sent to the Centre for Forensic Sciences for identification.

With the help of the National Centre for Missing Persons and Unidentified Remains and the DNA Database, the centre confirmed the body floating by Pier 11 was that of the Calgary woman who inspired hundreds in southern Ontario to search for her in droves.

While police never searched in the harbour waters, Elle McFearsin, Holly's boss who helped lead civilian search efforts, told CBC port staff checked around the area for her a number of times.

"It's heartbreaking," she said.

When CBC asked Staff-Sgt. Dave Oleniuk if there was any indication of homicide or foul play, he said, "No, not at all. Nothing suspicious."

Police have maintained this since almost the beginning of the investigation.

Oleniuk added they also weren't ready to label her death as a suicide, but noted the coroner, who is waiting on toxicology repots, will ultimately determine how she died. That said, he doesn't think the report will reach a different conclusion.

Some answers but no comfort from Holly's death

Holly's father thinks that response is "outrageous" and "bizarre."

He says he was told her body had no signs of visible trauma, but is doubtful he'll ever know the truth since she was in the water for so long that dental records were what identified her remains.

Dave adds the recovery of her body does answer some of the theories about what happened to her.

"She hasn't been kidnapped so we don't have to worry about that, she's not roaming the streets of North America in a psychotic state, she may never have been psychotic. We don't know though whether she had an accident and drowned, whether she was killed and put in the water, we don't know any of those things really," he said.

But those answers aren't making the loss any easier to deal with, especially since Holly told her family she wanted to fly back home to Calgary and mentioned that she was chased and potentially being followed by two men. Those claims have never been confirmed. 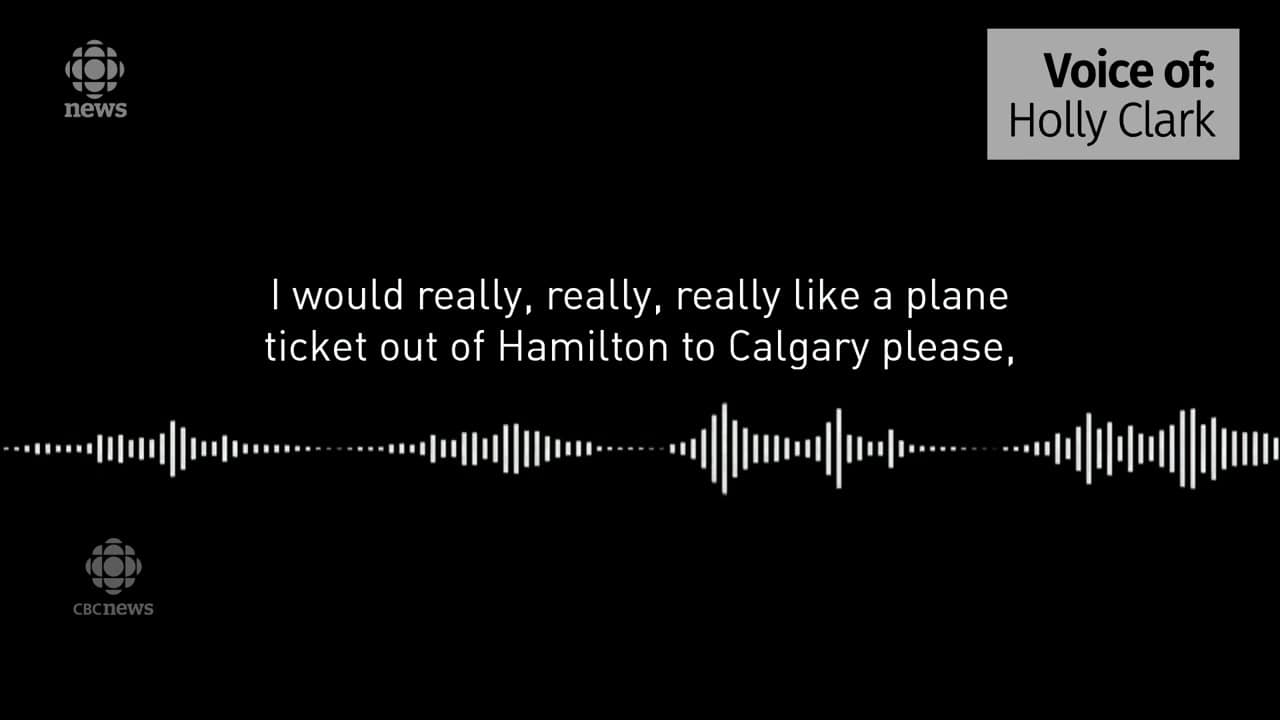 10 months agoVideo
2:11
"I was coming out to get her and the next day she disappeared," says the Calgary father of Holly Ellsworth-Clark, who is at the centre of a search underway in Hamilton, Ont. Listen to the last message she left her family. 2:11

"I am almost certain this is not a suicide ... Holly had said the morning prior that she really wanted to come home. She had plans [on her calendar], she didn't tidy things up before she left," Dave said.

"I don't understand the notion there's nothing suspicious when a person expresses to a number of other people before they go missing that they're very worried that two men are trying to kill them and that person ends up drowned. That's really weird — and to say that's not suspicious is even weirder."

Clark respects Hamilton's police officers but doesn't think they spent enough time looking into those claims, even though they did search a local motel called the Budget Inn and conducted a number of grid searches around the city. They also used the K9 unit, Ground Search and Rescue, the Criminal Investigative Division and their Patrol and Action unit.

Holly left her home on Jan. 11 near Sanford Avenue North and Cannon Street at roughly 4 p.m. that day according to police. They described her as "in crisis."

A window pane beneath Holly's room, which sits above a storefront, was boarded up after she shattered it trying to enter her home the day before.

Holly's apartment after she left, Dave previously told CBC, was full of plants waiting to be watered, seeds waiting to be planted, handmade lyric books and groceries she bought for an event on the night she disappeared.

Holly left almost all her belongings behind including her cell phone, vehicle and clothing to shield her from the rain that day. Her bank account wasn't touched either.

10 months agoVideo
0:13
In this video, a woman, who police say is Holly Ellsworth-Clark, walks in the rain, wearing what appears to be a rain poncho with black pants and black boots, while carrying a black garbage bag that appears to be full. 0:13

Surveillance video shows Holly walking on Wentworth Street North toward Shaw Street and was wearing what looked like a rain poncho with black pants and black boots, while carrying a black garbage bag that appeared full.

While Clark says they thought Holly may have been dead for quite some time, he and the family never stopped searching for her.

Online groups of cyber sleuths like Guardians of our Angels Missing Persons Canada and others began spreading the word and soon, turned in Hamilton to help.

As tips poured in, the family and civilian search squad scoured the streets, referring to their Google Map with every past search, every poster and every tip location. They even found multiple pieces of unconfirmed evidence.

After six weeks of relentless searching that eventually spread into Toronto, her family returned to Calgary without Holly.

Then, they came back in June, offering a reward for anyone who could find her. With no additional clues, they left Hamilton again at the end of the month.

The most recent efforts to find Holly included her family planning to launch an album with her music and father using Twitter to try and attract the attention of celebrities.

He was hoping he would find her.

"My daughter is dead and there's nothing I can do to help her, so I'm done investigating," Dave said.

While most knew Holly as a missing person, her family says she was a tough, stubborn, music-loving athlete with a big personality.

The Newfoundland-born, Calgary-raised woman pinned down competitors with her 6'1", 200-pound frame to win gold and silver medals at national wrestling competitions at the University of Calgary.

Before she graduated in 2016, her father taught her three chords on guitar, leaving her smitten by music.

She spent a year writing her own melodies, which eventually led her to move to Toronto to play in her band, Deep Bight. After that dissolved, she moved to Hamilton in in October 2019.

Holly described her music as a mix of Velvet Underground and 90s grunge.

"I think most of my songs that are really important to me come from feeling discomfort and being like, 'Shoot, I'm not being honest with something in my life,' " she said in an interview with The Underground Listener.

"My music is really emotionally driven and I'm trying to be as honest about my internal conflicts that I'm basing, I don't want to tell half the story. I want to tell the whole truth of what I'm feeling."

When Holly wasn't playing at bars and open mic nights, she was roving through forests, jogging or scouting out graffiti murals.

Close friends say she was passionate about justice.

Her family is currently planning her funeral.